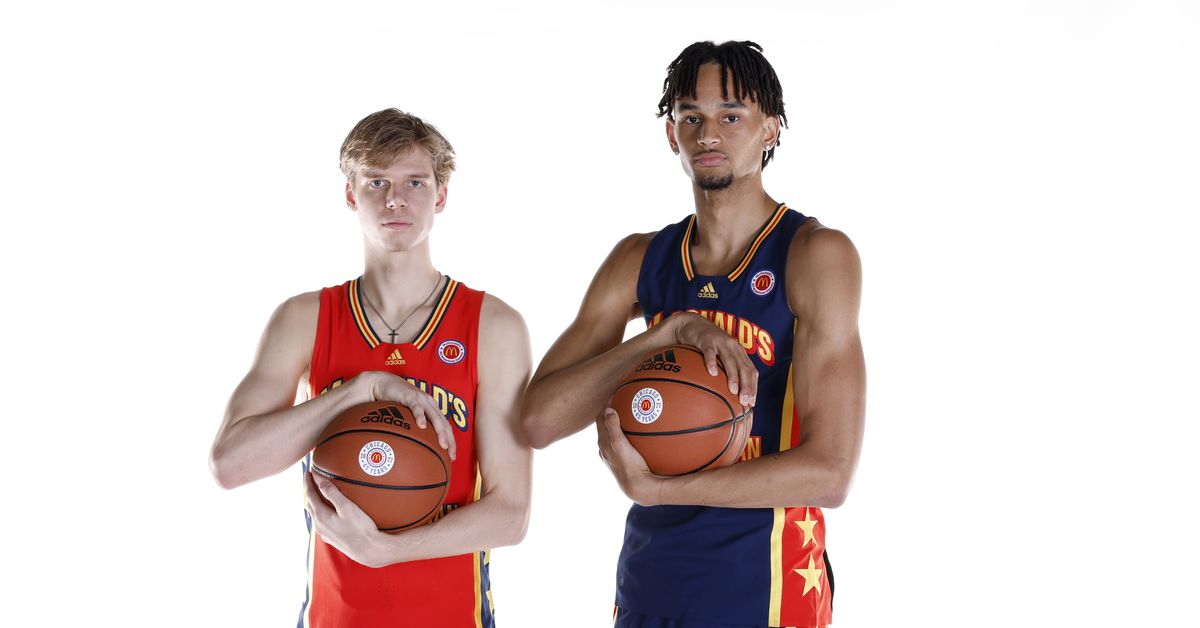 The McDonald’s All-American Game is finally back after taking the last two years off because of the pandemic. Once again, 24 of the best high school players in the country on both the boys and girls side are coming together for a thrilling showcase of the best incoming talent in college basketball next year.

If history is any indication, the majority of the players taken in the first round of the 2023 NBA Draft will come from this game. However, next year’s top NBA prospects are taking a variety of different routes to get to the league. French center Victor Wembanyama is already playing professionally in his home country, point guard Scoot Henderson will spend two seasons with the G League Ignite before entering the draft, and mega-athletic twins Amen and Ausar Thompson are playing in the Overtime Elite League. There’s no doubt that this year’s McDonald’s All-American class will still feature plenty of future pros.

The top of the class

Nick Smith Jr., G, Arkansas: A wiry 6’4 guard out of Jacksonville, AR, Smith is staying home to play for Eric Musselman as the crown jewel of the nation’s No. 2 recruiting class. He’s been steadily climbing the rankings over the last year and now looks like he may be the best long-term backcourt prospect in the class. Smith currently projects as a combo guard with a deep bag of scoring tricks who can still get his teammates involved as a facilitator. He has elite quickness with the ball in his hands and can often effortlessly create separation off the dribble. With a beautiful floater and shooting range beyond the three-point line, Smith is a true three-level bucket-getter who leverages the threat of his own scoring to find teammates for easy buckets. There will be questions about how he holds up on the defensive end and if he can be a full-time primary initiator, but he currently has the makings of a possible top-five NBA draft pick.

Dariq Whitehead, G, Duke: Two years ago, Whitehead was the burgeoning sophomore star for Florida prep powerhouse Montverde Academy playing behind Cade Cunningham, Scottie Barnes, and Moses Moody (there’s a reason why we called it the best high school team ever at the time). Whitehead was the star of the show as a senior and now projects as a likely top-10 pick as a 6’6 guard with length, quickness, and the skill set to impact the game on both ends of the floor. Whitehead likes to play with the ball in his hands, showcasing an impressive feel for the game and the ability to get downhill when he wants. He still a shaky shooter, but he impacts so many other areas of play. Whitehead is also one of the youngest prospects in this class, not turning 18 years old until August, which makes his present day maturity and future upside even more enticing.

High-level shot-making display from top-five recruit Dariq Whitehead with 31 points against IMG. The two-time high school national champion Whitehead, headed to Duke next year, is a coach’s dream with the way he defends, passes, and does all the little things to impact winning. pic.twitter.com/K5772MMJxX

Dereck Lively II, C, Duke: Lively emerged as the potential top prospect in this class during a breakout summer playing next to Jalen Duren on a loaded Team Final squad on the EYBL. Now he’s headed to Duke where he’s likely to be a one-and-done top-10 pick. A 7’2 center with a ridiculous 7’8 wingspan, Lively projects to be one of the best defensive prospects in this class as an excellent rim protector who can also hold his own on the perimeter when he needs to switch or trap. He’s also a good rebounder who runs the floor hard in transition, which should lead to plenty of easy buckets around the basket. Lively’s halfcourt offense is more of a question mark, but he did showcase some impressive outside shooting on the EYBL. The dream here is that he becomes a stretch five who can dominate defensively.

3 McDonald’s All-Americans who are rising

Jarace Walker, F, Houston: Walker is the highest-rated recruit to pick Houston in the modern era. The 6’8, 220 pound forward plays with a mix of power and skill that should make him an instant impact player for the Cougars. He showed his full array of skills at the McDonald’s Game scrimmage on Sunday, dropping beautiful passes in the open floor, bullying defenders in the post, and showing comfort handling and shooting from the outside. Playing for Kelvin Sampson should help him on the other end of the floor, as scouts will want to make sure he’s quick enough defensively to warrant one-and-done status.

Brandon Miller, F, Alabama: Miller is oozing with long-term upside as a rangey 6’8 wing heading to Alabama to play for Nate Oats. He glides around the floor on both ends, leveraging his tremendous physical tools to make a two-way impact. He can defend all over the floor with impressive quickness on the perimeter and the length to block shots near the basket. Offensively, Miller is already comfortable handling the ball and getting into his midrange game. He also showcases impressive finishing touch around the basket, but scouts will want to see if he can play through contact in the SEC. It will be interesting to see how Miller fits in Alabama’s three-point heavy attack as he continues to develop his shooting range.

Gradey Dick, G, Kansas: There’s no better shooter in this class of McDonald’s All-Americans that Gradey Dick. A 6’7 wing heading to Kansas, Dick has a beautiful shooting stroke and advanced footwork to help him get off clean looks from the perimeter. He should be a high volume, highly accurate shooter who can dart around screens and make enough plays when defenses try to run him off the line. Scouts will want to see how Dick handles himself defensively in the Big 12 and the full extent of his ability off the bounce, but he feels like a safe bet as a big shooter with a reputation for having a good feel for the game.

The best of the rest

Amari Bailey, G, UCLA: Bailey is perhaps the most well-known recruit in this class after playing next to Bronny James (as well as current pros Ziaire Williams and BJ Boston) at LA prep powerhouse Sierra Canyon. The 6’5 guard has been a staple at the top of the class rankings for so long that his game tends to get scrutinized more than his peers, but he’s looked good since arriving in Chicago. Bailey is a quick and powerful combo guard who can create shots for himself and his teammates. He’s deadly in the open floor, but will need to prove he can shoot from the outside to live up to his lofty billing next season at UCLA.

Keyonte George, G, Baylor: George is entering Baylor with a reputation as a big-time scorer after a standout year at IMG. He’s an excellent shooter with deep range who also moves well off the ball on cuts going to the basket. George isn’t the quickest guard in this class, but he might be the savviest. He’ll need to show improvement defensively to be selected as highly in the NBA draft as his prep reputation suggests.

Dillon Mitchell, F, Texas: Mitchell is a 6’7 forward who enters Texas with a reputation as arguably the best athlete in the class. He combines incredible bounce around the rim with great speed in the open floor and plus length. Mitchell should be an instant impact defender for the Longhorns. Scouts will want to see if he is willing and able to shoot the ball from the outside at Texas.

Kel’el Ware, C, Oregon: Ware is a 7-foot center who shot up the class rankings over the last year because of his impressive movement skills, coordination, and length. He should making a living blocking shots and finishing with dunks around the rim, but his flashes of perimeter skill makes him even more intriguing. He won a state championship with Nick Smith at North Little Rock High and is now leaving his native Arkansas to play his college ball at Oregon.

Cason Wallace, G, Kentucky: Wallace earned a reputation as one of the best players in Texas for his fearless defense and advanced feel for the game. He should be a lockdown perimeter defender from the jump who plays bigger than his size at 6’4. He isn’t the most slippery ball handler, but Wallace can finish tough layups or get into his mid-range pull-up game. Scouts will want to see where his three-ball is at, but he feels like the type of player who can thrive in any setting.

Jordan Walsh, F, Arkansas: Walsh is a big 6’7 wing who brings it on the defensive end and shows enticing flashes as an open floor playmaker. His versatile defense should be his calling card, with the length, quickness, and competitive makeup to cover a variety of different assignments. Walsh has showed some good body control attacking the rim when he has space to drive, but his three-point shot in the halfcourt remains a question mark. He’ll be a big piece of an Arkansas team that will draw plenty of attention from NBA scouts next season.

Which schools have the most 2022 McDonald’s All-Americans?

Here’s the full breakdown of the roster at the McDonald’s Game this year:

How to watch the 2022 McDonald’s All-American Game

Both games will be played at Wintrust Arena in Chicago, and can be streamed on Watch ESPN.