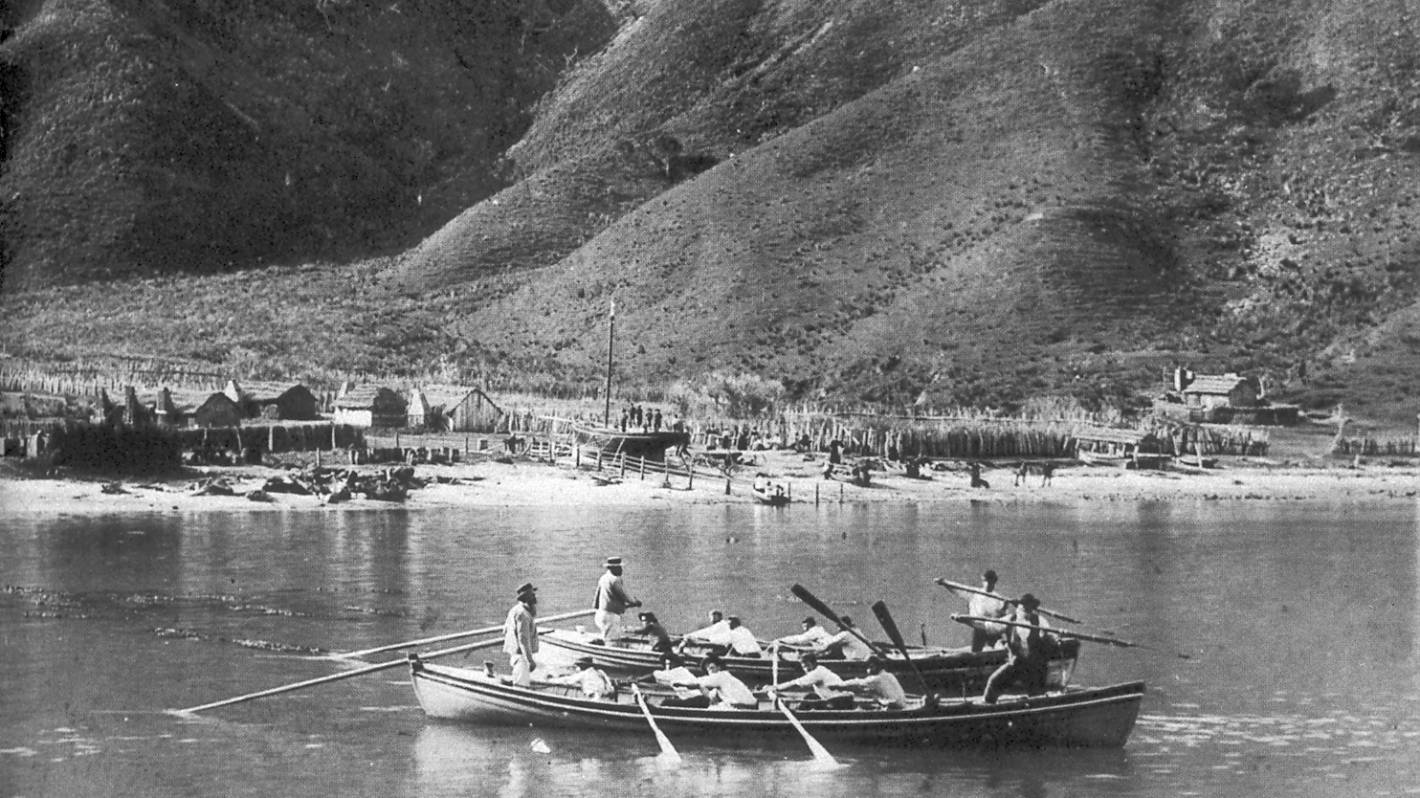 What happened when the Treaty of Waitangi arrived in Marlborough? Reporter Jennifer Eder finds a tale of scepticism, negotiation, and bloodshed. Could the next chapter be the promised partnership?

When missionary Reverend Henry Williams arrived in the Marlborough Sounds with a copy of the Treaty of Waitangi in May 1840, most Māori had very little contact with Pākehā compared to iwi in the north, except for a few resident whalers and their rough-and-ready crews.

Williams brought one of eight copies of the treaty that was first signed by chiefs at Waitangi, in the Bay of Islands, on February 6, 1840.

He had translated the treaty himself, with the help of his son, drawing on the te reo Māori he learnt in his 17 years working as an Anglican missionary in the Bay of Islands, trying to stop missionaries trading muskets with Māori, baptising many and schooling their children.

READ MORE:
* Where Kiwis are heading this Waitangi weekend
* The Patchett Way: A street with a name steeped in history
* Photographer donates Springbok Tour books to Marlborough colleges
* Our Truth, Tā Mātou Pono: The many uncomfortable truths of the Wairau Affray

However, his Māori version of the treaty, known as Te Tiriti o Waitangi, did not clearly reflect the English version, and he had been explaining it to Māori rangatira it in the best possible light.

On a schooner named the Ariel, Williams arrived in Tōtaranui Queen Charlotte Sound on May 4, 1840.

Te Ātiawa was the resident iwi, having moved south during the Musket Wars, along with allies from Ngāti Toa, Ngāti Rarua and Ngāti Koata, using muskets to win land from the Kurahaupō iwi around 1830.

He was a tohunga (priest) and older brother of Te Rauparaha, a war leader made notorious in the Musket Wars.

The next morning Nohorua, his relatives and other chiefs came on board the HMS Herald.

Among them was Maui Pū, who was in favour of te tiriti. He had previously visited Tasmania and learned good English, to Bunbury’s surprise, and aided the discussion.

Finally Nohorua agreed to sign the treaty, as long as his English son-in-law, whaler Joseph Thoms, would witness it, thinking if his grandchildren lost his right to land as a result, at least their father would share the blame.

Thoms was the only Pākehā to sign te tiriti alongside the Māori chiefs, on June 17, 1840.

Ria Waitohi, daughter of paramount chief Te Pēhi Kupe, was also prepared to sign but Bunbury would not allow it because she was a woman, Katene said.

“Her husband Rāwiri Pūaha, himself a chief, was so insulted at the affront to the mana of his wife that he refused to sign. Rāwiri is the brother of Te Kanae, who did sign.”

Kaikōura was a Rangitāne chief who maintained some of his status even after defeat and absorption by Ngāti Toa.

After the signatures, Bunbury decided he had enough to declare British sovereignty, which he did at Horahora-Kākahu Island.

What led to the signing of the most important document in New Zealand’s history?

“Personally I believe they signed in good faith that the treaty would be adhered to, but obviously similar to Nohorua, with a level of doubt that the contents would be upheld,” Eade said.

But three years after the signing at Port Underwood, on June 17, 1843, the Wairau Affray north of Blenheim showed the treaty had not guaranteed what Williams and Bunbury claimed.

“That event was a significant marker in New Zealand’s history, the first land war between iwi and by the government of the day,” Eade said.

The New Zealand Company was surveying land in Marlborough’s Wairau Valley with a fraudulent deed, when Te Rauparaha, certain the Wairau had not been sold, escorted them from the land, pulling up survey pegs and burning down their makeshift huts.

A party of 50 British settlers then arrived to arrest him on arson charges, which turned into a battle, claiming the lives of 22 Europeans and at least four Māori.

Te Rauparaha was later taken captive while the Government pressured the younger Ngāti Toa chiefs to sign away the Wairau, which happened in 1847, Eade said.

“Te Rauparaha peacefully tried many, many times to avoid the conflict, as did other Ngāti Toa chiefs. NZ Company was just so hell-bent on getting the Wairau.

“Te Rauparaha was only protecting his land and his people as any good rangatira would do, yet through the centuries his actions were vilified by many Europeans, even though Te Rauparaha’s actions were exonerated publicly.

“The loss of the whenua, subsequent government policies and the colonisation process has had a huge impact on the overall wellbeing of Māori, which is still felt today and will be for generations to come.”

Stuff’s NZ Made/Nā Nīu Tīreni project: When the Treaty of Waitangi was signed, Māori owned more than 66 million acres of land. By 1975, almost 97 per cent had been sold or taken. (Last published February 1, 2021.)

Eade said hoped Blenkinsopp’s Cannon could be returned to Ngāti Toa, so the iwi could make its own decision about where the historic object should reside.

The cannon was originally given by whaler Jacky Guard to Nohorua as a payment, so he could set up a whaling station at Kākāpō Bay in the 1830s.

The cannon was named Puhuriwhenua, or “earth shaker”.

The cannon was later stolen by Captain John Blenkinsopp, and offered to Te Rauparaha for access to wood and water for his ship.

Blenkinsopp claimed it was in exchange for land at Port Underwood, but this was later rejected by colonial authorities.

Eade said she usually marked Waitangi Day by going to Te Pātaka o Wairau, a public event intended to bring many cultures together to experience Te Ao Māori, or the Māori world, but this year’s event was cancelled due to Covid-19.

Te Ātiawa o te Waka-a-Maui vice chair Rita Powick said with treaty settlements completed and New Zealand history being added to the school curriculum, there was a lot to celebrate on Waitangi Day.

“We celebrate the journey our tūpuna laid out for us … We acknowledge our tūpuna for their tenacity and we’re learning from it as we go forward with new confidence.

“We’re not stakeholders, we’re a partner, a treaty partner. That’s an awesome space to be in … we’re not the passengers in the back of the bus any more, we’re co-navigating.”

Although there was also caution, as iwi had learned from the treaty breaches of the past, she said.

The new pou installed at Blenheim and Picton were examples of post-settlement confidence and the feeling that Te Ātiawa and other iwi were an important part of the community.

“It’s that sharing of the space which is what the treaty is about, that shared cultural recognition, being able to participate in that.

“We’re positive and keen players in our community, for our people, and anyone else wanting to be part of it. That’s the partnership. It’s like that whakataukī: nau te rourou, naku te rourou, ka ora te katoa – with your food basket and my food basket, everyone is better off.”

A pou which tells stories of a spiritual ancestor, a tribal chief and Marlborough’s whaling history has been unveiled in Picton.

But she hoped Waitangi Day in the future would be less about remembering what happened then, and more about reflecting on what was now being done to achieve true partnership between iwi and the Crown.

Māori history lecturer Dr Peter Meihana, who was also on the rūnanga at Rangitāne o Wairau, said he learnt he was descended from treaty signatories after being cast as Thoms in a school play, only to learn from family that he was actually descended from Thoms, along with Nohorua and Kaikōura.

Later he studied the motivations of his ancestors in signing the treaty, which he believed would have been different to the northern rangatira who had a completely different experience of Pākehā by 1840.

But Rangitāne o Wairau always made sure to mark June 17 (when the treaty was signed) in some way too, he said.

Corey Hebberd, 26, speaks about his Papa, Manaia “Nugget” MacDonald and his connection to the Wairau Bar.

Rangitāne o Wairau general manager Corey Hebberd said it was hard to commemorate the treaty signing as a community while taking precautions against Covid-19, but he would like to see more public events and educational activities on Waitangi Day in Marlborough.

“Sharing korero and teaching history in schools is really good, but I think we need to be open to sharing stories about what it means, not just historically but also in modern Aotearoa, what does it mean today?

“So much of what the Crown does now is built on the treaty. How we put it into action is something we could provide more learning opportunities about.”