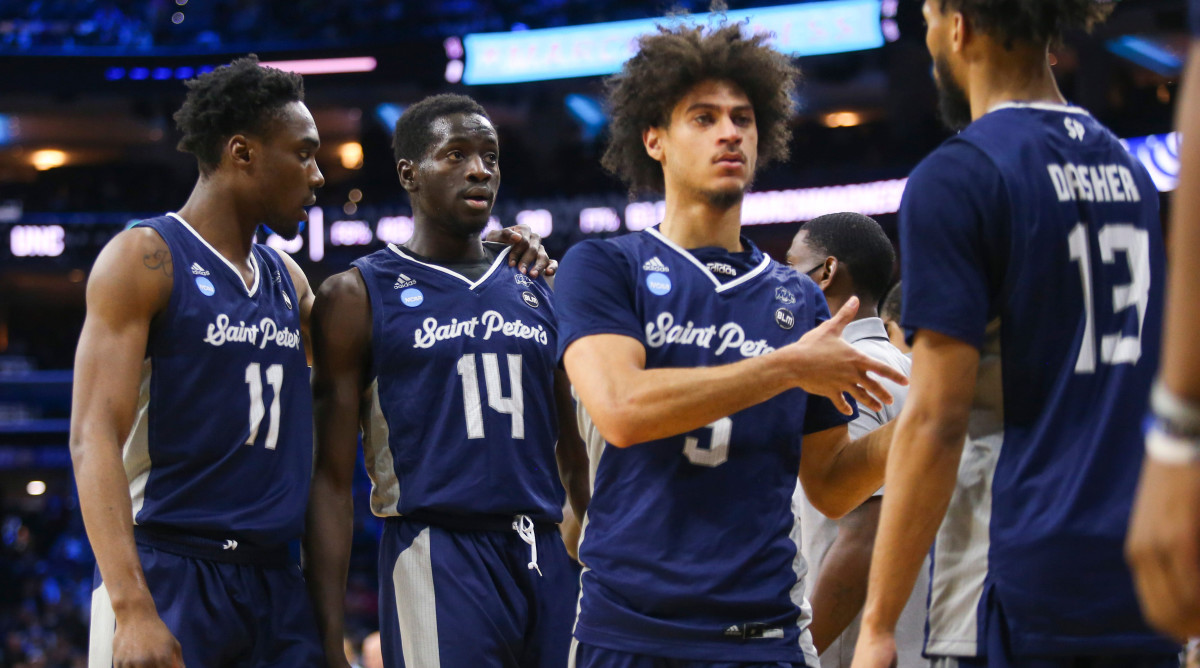 Thanks for the Memories, Peacocks

We’re on to the Final Four—one which will, after everything we just witnessed, somewhat ironically feature four proper blueblood programs, as well as arguably the biggest game of the season between Duke and North Carolina. It will also take place without Saint Peter’s, a statement that really isn’t all that surprising in a vacuum, but you’d be lying if you said you weren’t going to miss those guys. (Or you’re a Tar Heel fan, or a Purdue fan, or a Kentucky fan).

The Peacocks, the first No. 15 seed to make the Elite Eight, didn’t have their best stuff Sunday, falling by 20 to UNC without really landing a proper punch. While it wouldn’t be right to excuse them—they certainly wouldn’t tell you otherwise—it frankly would have been hard to expect or ask for more, given the odds they’d overcome simply to get this far, and the fact that there was absolutely zero chance they’d sneak up on any opponent again. “They hang their hat on punching teams in the mouth, being the underdog, that kind of thing,” Carolina forward Leaky Black said. “We just had to let them know it wasn’t going to happen tonight.”

Nobody will remember the way the Peacocks went out, only that they got here without a fluke: They pulled off three upsets through the quality of their play, the fortitude of their group, and the scheming of coach Shaheen Holloway, who will by all accounts soon be named to the job at Seton Hall, a position he will have certainly earned. “Coming in, Coach established the vision that he had,” said guard Daryl Banks. “All of us went on board with that vision.” Say whatever you want about the school’s budget, the circumstances, the randomness, but Banks, KC Ndefo, Doug Edert and his mustache, and that entire group deserved these moments, proving it with their fearless play. In theory, many of them could be back for another run next season, but it’ll probably never be this good for the Peacocks again—it’s hard to imagine topping the upset of Purdue in the Sweet 16 on National Peacock Day, or stunning Kentucky in a classic. Still, after all this, who’s to say?

The final post-game question posed to Holloway by reporters Sunday was open-ended. He was asked what he’d remember the most about the past few weeks: “That a group of guys came in here no one gave a chance to, no one believed in, but the people in our locker room that’s in our program, administration, us, and made history,” Holloway said. “They shocked the world. You’ve got guys that’s going to be remembered for things that they could tell their kids and grandkids. It’s a story within a story. I’m super proud of these guys. They came in and made history. Point-blank, period. No one has done it.”

And while it would be nice to say no No. 15 seed will ever do it again, thanks to Saint Peter’s, we’ve all learned our lesson about confident predictions this time of year.

• And with the Cinderella out, who will emerge to win a battle of bluebloods? Pat Forde on the loaded men’s Final Four and the full-circle scenario that could play out for Coach K.

• UNC didn’t look like a Final Four team at the start of the season. Kevin Sweeney explains how a steady rise and unending belief in their coach have the Tar Heels dancing their way to New Orleans.

• Despite being a No. 1 seed, Kansas has been far from the forefront of tournament discussion. But while everyone else bowed out, the Jayhawks kept it moving, writes Jeremy Woo.

• No. 1 NC State vs. No. 2 UConn: It’s been 24 years since NC State’s last Final Four appearance. And to finally return, all the Wolfpack need to do is end UConn’s 13-year streak of Final Four trips—in Bridgeport, Conn., no less. NC State rallied late against Notre Dame on Saturday thanks to guard Raina Perez, who had a steal midcourt and the go-ahead layup with 14 seconds left to secure a 66–63 win. The Huskies, however, cruised in their Sweet 16 game against Indiana, coming out with a 16–0 run to start the second half and ultimately handling the Hoosiers, 75–58. 7 p.m. ET, ESPN