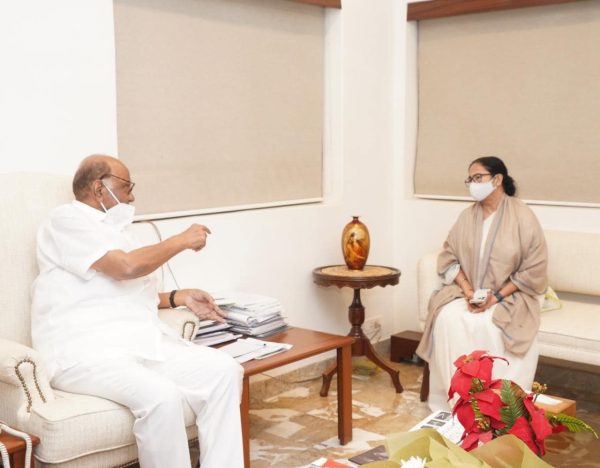 Mamata Banerjee, the Trinamool Congress (TMC) party chief and three-time chief minister of the eastern state of West Bengal, met senior politician Sharad Pawar, the Nationalist Congress Party (NCP) leader as well as Shiv Sena politicians in Mumbai this week. The Shiv Sena-NCP combine is in power in the state of Maharashtra.

This meeting signaled growing cooperation among India’s largely splintered opposition parties in the run-up to the 2024 general elections, in which they will take on the ruling Bharatiya Janata Party (BJP). At the same time, it also marked a significant departure from conventional political norms: this is a bid for the formation of a non-Congress-led opposition alliance spearheaded by the TMC. Banerjee did not mince her words when she said that “a firm alternative course should be made as nobody is fighting against [the] ongoing fascism [of the BJP].”

Vocal in her criticism of the Congress, Banerjee dismissed a revival of the United Progressive Alliance (UPA). “What is UPA?” she asked. “There is no UPA now.” The Congress-led UPA was in power for two terms, during 2004-2009 and again during 2009-2014.

The TMC chief’s visit in Mumbai comes against the backdrop of her party drawing leaders from traditional Congress bastions into the TMC. Eyebrows were raised when 12 out of the 17 Congress legislators in the northeastern state of Meghalaya joined the TMC last month. This enabled the party to dislodge the Congress from its position as the main opposition party in the BJP-ruled state.

A Bengal-based party, the TMC announced its intentions of contesting assembly elections in the western state of Goa, one of the five states going to the polls early next year. Former two-time Goa chief minister, Luizinho Faleiro, who was a Congress leader for 40 years, joined the TMC recently, saying that “Mamata Banerjee can defeat the BJP as a member of the extended Congress family.”

Banerjee formed the Trinamool Congress 23 years ago after breaking away from the Congress. The TMC’s pro-active stance and strategy has shaken up the opposition ranks, which for decades have looked to the Congress, India’s grand old party, be it in power or not, for leadership.

Ever since the Narendra Modi-led BJP swept to power in 2014 defeating the Congress by an overwhelming majority, the latter seems to have lost the plot. Not only has it failed to win state elections on its own steam but it has also been plagued by internal dissensions. It was again routed in the 2019 general elections, with its then party President Rahul Gandhi even losing his own seat in the family bastion of Amethi, in Uttar Pradesh.

In fact, the leadership crisis facing the party, with Rahul Gandhi perceived as an unwilling leader, has also left Congressmen disillusioned and dispirited.

Through these past seven years, non-Congress opposition parties have been waiting for the Congress, the second largest national party, to put up a stiff resistance to the BJP and offer a credible alternative. They have been left sorely disappointed.

Therefore, when Banerjee won a resounding victory in West Bengal, trouncing the BJP in a bitterly fought election in May this year – the electoral battle was touted as the “Fight for the Soul of India” – it emboldened the TMC.

Election strategist Prashant Kishor, who played a critical role in the TMC win in West Bengal, is now helping Banerjee and the TMC move on from being “just another” regional party to a party of national relevance with the clout to challenge the BJP.

Interestingly, in the midst of the Bengal elections in April this year, Banerjee had written to opposition leaders calling for a “united front against the ruling BJP.”  She reached out then not only to the leaders of the NCP and Shiv Sena in Maharashtra, the Dravida Munetra Kazhagam in Tamil Nadu, the Samajwadi Party in Uttar Pradesh, the Kashmir-based National Conference and Peoples Democratic Party but to Congress President Sonia Gandhi as well.

However, a lot has changed since then. Relations between the Congress and the TMC have nosedived. When the Congress’ dynamic Women’s Wing chief Sushmita Dev, considered to be close to Rahul Gandhi, suddenly resigned and walked over to the TMC in August this year, the Congress felt blindsided. The TMC soon appointed Dev as its Tripura state in-charge, apart from making her a member of the Rajya Sabha, the upper house of Parliament. According to party insiders, she will play an important role in the party’s expansion plans in the northeastern states. The BJP heads governments in all the states of the Northeast.

The TMC has astutely sensed the vacuum in the opposition space and has gone for the jugular. At the same time, the TMC is perceived as a “good option” for those who are disgruntled with the Congress and not willing to join hands with the BJP. Former Haryana Congress president Ashok Tanwar, who had quit the party in 2019, also recently joined the TMC.

Rebuffing critics who have questioned TMC’s aggressive stance, Derek O’Brien, the party’s national spokesperson and Rajya Sabha parliamentarian said the aim of the party was to “fight and defeat the BJP.” “We are targeting states where BJP has no formidable opponent. Where there are strong anti-BJP forces we are not going there be it Tamil Nadu, Maharashtra.” Even in the crucial Uttar Pradesh Assembly polls, the TMC sees Samajwadi Party’s Akhilesh Yadav as a strong challenger to BJP Chief Minister Yogi Adityanath.

Prashant Kishor left no room for doubt about the TMC’s national ambitions of positioning itself as an alternative to the Congress when he tweeted, “The IDEA and SPACE that #Congress represents is vital for a strong opposition. But Congress’ leadership is not the DIVINE RIGHT of an individual especially, when the party has lost more than 90% elections in last 10 years. Let opposition leadership be decided Democratically.”

Congress spokespersons lost no time in accusing the TMC of weakening the opposition and helping the BJP in the 2024 polls.

But an unfazed TMC is going ahead with its national plans. Its recent inductions, for instance, are not all aimed at roping in leaders with a mass following but include those who have considerable political clout, be they ex-diplomat turned politician Pavan Varma or cricketer-turned-politician Kirti Azad.

The TMC intends to make its presence felt in all walks of life. Consequently, during her Mumbai visit, Banerjee interacted with prominent members of civil society  and vocal BJP critics in Bollywood. Activist Medha Patkar, actor Swara Bhaskar, director Mahesh Bhatt, comedian Munawar Faruqui, and poet and lyricist Javed Akhtar were among those she interacted with.

It appears that Banerjee wants to be seen as the voice of BJP critics. After all, it is her strong anti-communal stance against the BJP’s polarizing agenda that won her the Bengal elections.

Clearly, TMC’s strategy of setting the agenda and calling the shots has upset the extant status quo in the opposition ranks. Banerjee has also displayed a risk taking ability and a street fighter aggression that is lacking in Congress’ Rahul Gandhi but epitomized in Narendra Modi.

Nonetheless, as a seasoned politician, Banerjee is acutely aware of the limitations of her party which until now has been essentially a regional outfit. (The Congress still accounts for 19 percent of the vote share.) Therefore, she is stitching up an alliance of strong regional parties.

If in 2024 the BJP fails to secure a clear majority and the opposition parties jointly have the numbers to form a government, Banerjee could be an acceptable candidate to head a non-BJP government. Incidentally, there was a precedent in 1996 when the United Front, a platform of opposition parties, made the Janata Dal (Secular) chief and then Karnataka Chief Minister H.D. Deve Gowda the prime minister. Significantly, Banerjee enjoys warm relations with opposition parties across the spectrum, barring the Congress.

The TMC is clearly desperate to carve out an identity for itself that is distinct from the 130-year-old Congress party. But whether her gambit will pay off remains to be seen.

But so far the TMC chief is living up to her party’s 2021 election slogan, Khela Hobe: “The game is on.”