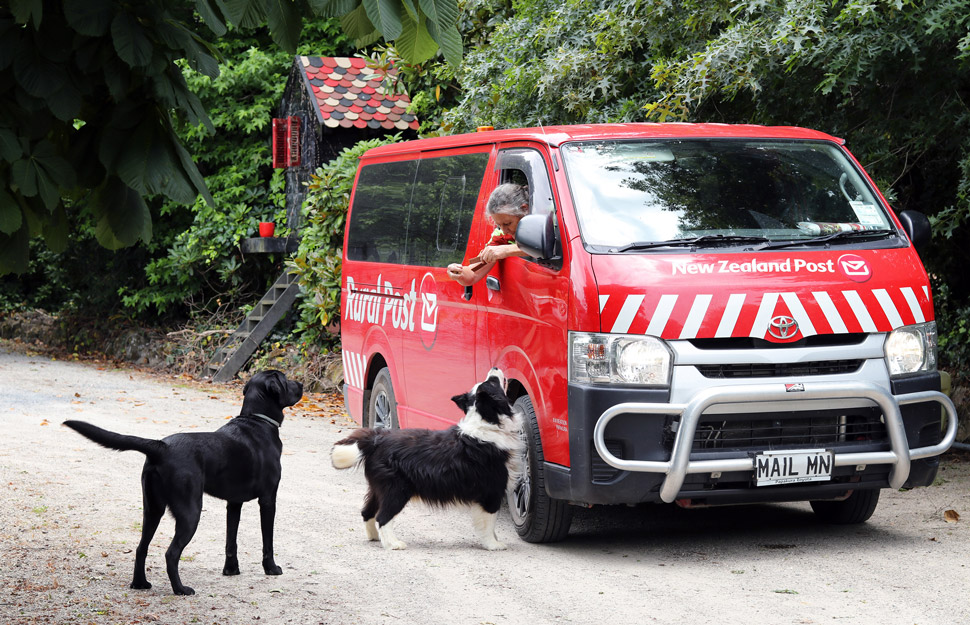 The secret to getting out of a pandemic-induced rut? Revel in the joy of dilly-dallying, says Lynda Hallinan.

In a pandemic, not all heroes wear capes with their face masks. Some wear cargo pants with pockets filled with dog biscuits and drive tomato-red Toyota Hiace vans loaded to the gunnels with mail-order plonk and other parcels. Others don jandals and drive tractors to tow damsels in distress out of ditches, but we’ll come to that later.

A hero, according the American queen of the “unauthorised biography”, Kitty Kelley, is someone we can admire without apology (or, in her case, an old-fashioned character assassination).

Heroes are good people. Kind people. Reliable people. They are the unsung champions of our local communities, the sort of eco-friendly, foodbank-founding, underdog-advocating, big-hearted volunteers recently announced as finalists in the 2022 Kiwibank New Zealand Local Hero of the Year Award.

Ever since Covid-19 became a household name, our definition of community service has changed. From sourdough swappers and entertaining TikTokers to nasal swabbers and checkout operators, these are the people who have got us through Auckland’s interminable lockdown with our sanity (mostly) intact.

And given that it ’tis now the season to be jolly, to give thanks and share glad tidings, let me end this godforsaken year with a shout out to the couriers and truck drivers and local posties who have literally carried the burden of a nation’s lockdown addiction to internet shopping.

When the US Postal Service inscribed its unofficial motto across the stone columns of New York City’s General Post Office Building in 1914, declaring that “Neither snow nor rain nor heat nor gloom of night stays these couriers from the swift completion of their appointed rounds”, they couldn’t have guessed that, little over a century later, a spiky virus would cause a global pile-up of parcels.

New Zealand Post, understandably, has been pushed to the brink. (It took them 23 days to send me an overnight delivery of — oh, the irony! — courier stickers.) They hired hundreds of new drivers to tackle the backlog but, judging by the 14-hour days our postie is pulling, they’ve still got a long journey ahead.

This is enough to turn anyone’s hair grey (even if all the hairdressers hadn’t been closed), but my rural postie, Bernie, has taken the last few months all in her stride. She’s such a good stick, is Bernie. Beloved by country canines from Papakura to Paparimu, she tootles up our tree-lined driveway to deliver parcels with a smile and a scattering of Schmackos.

I really couldn’t do her job.

When the lockdown scuppered my plans for a nationwide book tour to celebrate the release of my timely therapeutic tome, The Joy of Gardening, I had to settle for a local tour of letterboxes instead, delivering autographed copies to all four corners of our postcode.

Having enlisted the help of Google Maps to plot the most efficient route (it’s been a long time since I competed in school orienteering challenges) I set off at 6pm one balmy evening. Two hours later, I’d only made it to the end of the next no-exit road, though I’d had a lovely time chatting to everyone along the way as my kids wailed “you talk too much” from the backseat.

“Life is a journey, not a destination,” I cheerfully countered as I admired cottage gardens and renovated villas, took tiki tours of converted woolsheds and organic orchards, and even enjoyed a pre-Christmas cocktail tasting (it would have been rude not to). But the kids had a fair point. I’d have been fired if I was on New Zealand Post’s payroll.

Having been starved of human contact during the lockdown, I just couldn’t help myself. I dilly-dallied and dawdled around the neighbourhood, putting faces to the names of the people who chat on our local Facebook pages while having my crotch sniffed by an unlinked cluster of canines, none of whom appear to comprehend the meaning of contactless delivery.

I patted poodles and chatted to retired greyhounds, but the most memorable mutt I met was Tanque, a disabled bulldog who, as a baby, almost drowned in his mum’s water bowl before being adopted by a kindhearted pair of kindred spirits.

Having realised that leaving my run late was an amateur move (after dark it’s nigh impossible to see the numbers on most rural mailboxes), one morning I decided to set out bright and early, taking a road less travelled into the Hunua Ranges.

It had been raining all night. I took a wrong turn, mistook a farm track for a driveway and, having realised too late to turn back, ended up stuck in a rut at the top of a muddy bank in a paddock with no cellphone reception.

When life leaves you feeling stuck in a rut, it helps if there’s a farmer nearby with a tractor and a rope who can pull you out.

Unfortunately, I didn’t notice there was no cellphone reception until after I’d stepped out of the driver’s door, lost my footing and slid on my bum all the way down the bank to the bottom of the hill.

As I lay in the mud, cursing the coronavirus for its many inconveniences, I considered my options: run, hide, pretend to have been carjacked, hitchhike home or knock at the door of the nearest house and attempt to explain my predicament.

In a crisis, not all heroes wear capes. Some wear bemused smiles when aroused from their beds on a Sunday morning by a knock on the door by a blushing and muddied stranger who was supposed to be delivering a book to their neighbour.

It took Rod Bremner 90 minutes to tow my car out of his paddock. I suspect it took him considerably longer to stop laughing.