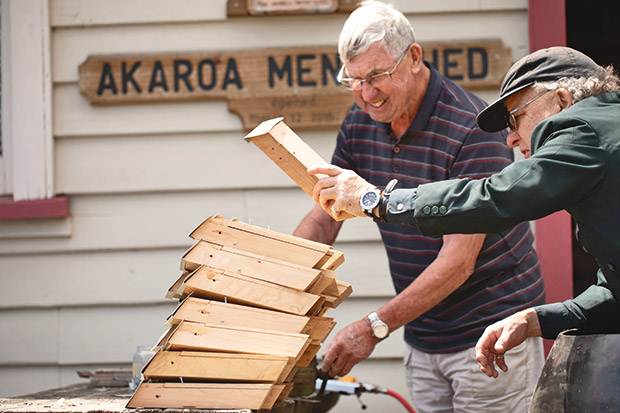 A retiree joins a global movement, lending a hand to build relationships — and neighbourhoods.

In Akaroa, an 86-kilometre drive from his home in Christchurch, John Dunlop and a group of men are happily “on the tools”, constructing not only useful things but a community.

John, a retired social worker and lifetime woodsman, can be found at the Akaroa Men’s Shed most days of the week. He is its most regular attendee: “It’s my happy place,” he says.

The ‘Men’s Shed’ movement was born in Australia in the 1980s. It was based on the traditional concept of the backyard shed, a place where men could go and restore or fix household items.

At the Men’s Shed, blokes gathered to share skills, have a laugh, and take on projects. It has since developed into a global organization focused not only on supporting communities but also members’ mental health. There are currently 118 Men’s Sheds in Aotearoa, with 18 more in planning.

John Dunlop at home in the shed.

The idea for the Akaroa branch came from a men’s health day in 2012, organized by the local Lion’s Club. Without a home base, founding members met each Saturday morning at a builder’s yard.

John joined in 2014, before the club had an official location. When members needed a permanent base to store their treasured tools, they approached the Christchurch Council. A week later, they had an official “home”.

The large workshop, formerly the Banks Peninsula mechanical workshop, was just what the Akaroa Men’s Shed needed. “For me, the advantage is that I don’t have to move a car out of my garage to do any work as a project,” says John. “I can do it at the Men’s Shed and have 10 times the amount of space that I have in my own garage.”

The free use of heavy-duty machinery is undoubtedly one reason members join, but there is also a deeper purpose. The shed provides a community for mostly retired men, who can dip their feet into a pool of knowledge offered by an eclectic mix — members include electricians, farmers, choirmasters and businesspeople.

Whether it be creating shelters for penguins, rodent traps for Pest Free Banks Peninsula or walking canes from mānuka branches, the Akaroa community is in the palm of their well-worn hands.

They’ve become the talk of the town. “We have quite a high profile in the local community, with people saying, ‘Why don’t you get the guys from the shed to have a look at that?’” says John.

Everyone is welcome, even those without skills but just wanting to participate. “They’re to watch or do whatever they want to do,” he says. This hospitality has encouraged nearly 40 members.

Despite the club’s name, women are also welcome. “That’s an interesting development,” says John. “A lot of the Men’s Sheds in New Zealand don’t have women participating. We’ve decided there’s no reason why women shouldn’t be here.” One female member has learned to handcraft wooden bowls; her skills are now so refined that John has become her pupil.

There have been bigger projects, such as refurbishing an antique Doctor Who-esque telephone box into a community book library. The shed’s tūī feeders, made from old glass bottles, are also popular. “Somebody came along the other day with three boxes of empty bottles — they were very proud to be contributing to the tūī feeders,” says John.

John’s family aren’t surprised by his dedication to the shed. “They know that I’ve been making things with wood all my life,” he says. A bassinet he made for his newborn daughter is now being used by his grandchildren. He hopes that the skills of the shed’s members are passed on in this way too.

WHY JOIN A SHED?

Men’s Sheds are the perfect place to learn new skills and build new relationships. Members can hold an affinity for woodwork, metalwork, or simply be a bolt holding the shed together by helping serve morning tea. Community is the driving force.

John says there is also no pressure to be there every week. “If someone is doing a particular project, they might be in four or five days. Then, we might not see them for a month or so after that.” For more, see menzshed.org.nz