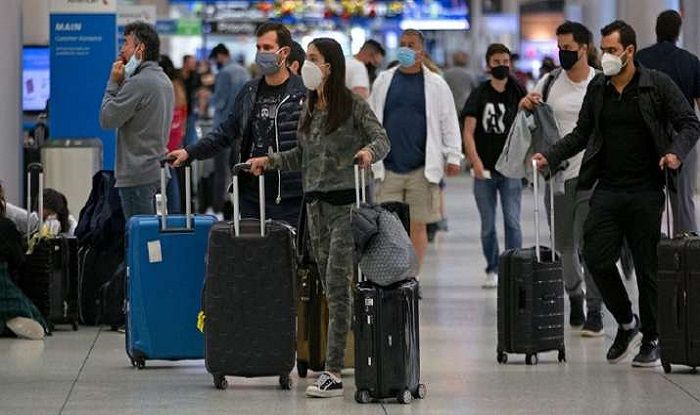 International Travel Ban Latest Update: In the wake of the new COVID variant Omicron, a slew of nations have moved to restrict air travel from South Africa. The development comes amid fear that the new variant could be even more contagious than the current predominant one and could bypass the effectiveness of the vaccination campaigns. Early indications also showed that the new variant may be more transmissable than the delta variant and current vaccines may be less effective against it.Also Read – Omicron Variant Detected In Germany, Mutations Found In Passenger From South Africa

Taking preventive measures, the UK announced that it was banning flights from South Africa and five other southern African countries effective from Friday. On the other hand, Germany said its flight ban could be enacted from Friday night. Moreover, Italy’s health ministry also announced measures to ban entry into Italy of anyone who has been in seven southern African nations South Africa, Lesotho, Botswana, Zimbabwe, Mozambique, Namibia and Eswatini in the past 14 days due to the new variant. The Netherlands is also planning similar measures. Here’s a list of countries that have put travel restrictions to African nations: Also Read – World On Alert As UK Reports Omicron Covid Variant. What We Know So Far

Japan: The Japanese government on Friday announced that the Japanese nationals traveling from Eswatini, Zimbabwe, Namibia, Botswana, South Africa and Lesotho will have to quarantine at government-dedicated accommodation for 10 days and do a COVID test on Day 3, Day 6 and Day 10. Japan has not yet opened up to foreign nationals. Also Read – New York Goes Into Emergency Mode, Governor Kathy Hochul Anticipates Post-Thanksgiving Mess

Bangladesh: The Bangladesh government on Saturday suspended travel from South Africa immediately, joining a growing list of countries banning travel to the country amid fears of the spread of the new COVID-19 Omicron variant. Giving details, Bangladesh’s Minister of Health and Family Welfare Zahid Maleque said they are aware of the emergence of the new variant and have decided to suspend travel from South Africa. “We are also strengthening screening procedures at all airports and land ports,” he said.

India: In New Delhi, the Central government has asked all states and union territories to conduct rigorous screening and testing of all international travellers coming from or transiting through South Africa, Hong Kong and Botswana, where a new variant has been detected.

Sri Lanka: The Sri Lankan government on Saturday said it will ban the entry to most travellers from six southern African countries from Sunday, after a potentially more contagious new coronavirus variant called Omicron was identified in South Africa earlier this week. “With effect from Sunday, arrivals from South Africa, Botswana, Zimbabwe, Namibia, Lesotho and Eswatini are required to undergo mandatory quarantine,” a circular from the Director General of Health Services said.

US: The United States joined the European Union and several countries to impose travel restrictions on visitors from southern Africa after discovery of the new omicron variant of the coronavirus. In a statement, the White House said the US will restrict travel from South Africa and seven other countries in the region beginning Monday.

Canada: The Canada government on Friday announced that it is banning the entry of foreign nationals who have travelled through southern Africa in the last 14 days after discovery of the new omicron variant of the coronavirus that has stoked world fears and triggered widespread travel bans. As per the fresh guidelines, the passengers who have arrived in Canada in the last 14 days were also asked to quarantine and get a COVID-19 test.

European Union: The European Union nations on Friday agreed to impose a ban on travel from southern Africa to counter the spread of a new COVID-19 variant. The 27 nations acted within hours upon the advise of the EU executive which said all needed to be extra cautious in dealing with the variant until it became clear how bad of a threat it would be, the EU presidency said in a statement.

Saudi Arabia: In the meantime, Saudi Arabia has also suspended flights to and from South Africa, Namibia, Botswana, Zimbabwe, Mozambique, Lesotho and Eswatini over concerns related to the new coronavirus variant.

Australia: The Australian government on Saturday banned flights from nine southern African countries and restricted its borders again to prevent the entry of the Omicron variant. The people who have visited South Africa, Zimbabwe and several other nations in the past fortnight will also be barred from Australia.

The new potentially more contagious B.1.1.529 variant was first reported to the World Health Organisation (WHO) from South Africa on November 24, and has also been identified in Botswana, Belgium, Hong Kong, Israel and the UK. The WHO on Friday designated as a Variant of Concern and named it Omicron . A variant of concern is the WHO’s top category of worrying COVID-19 variants.