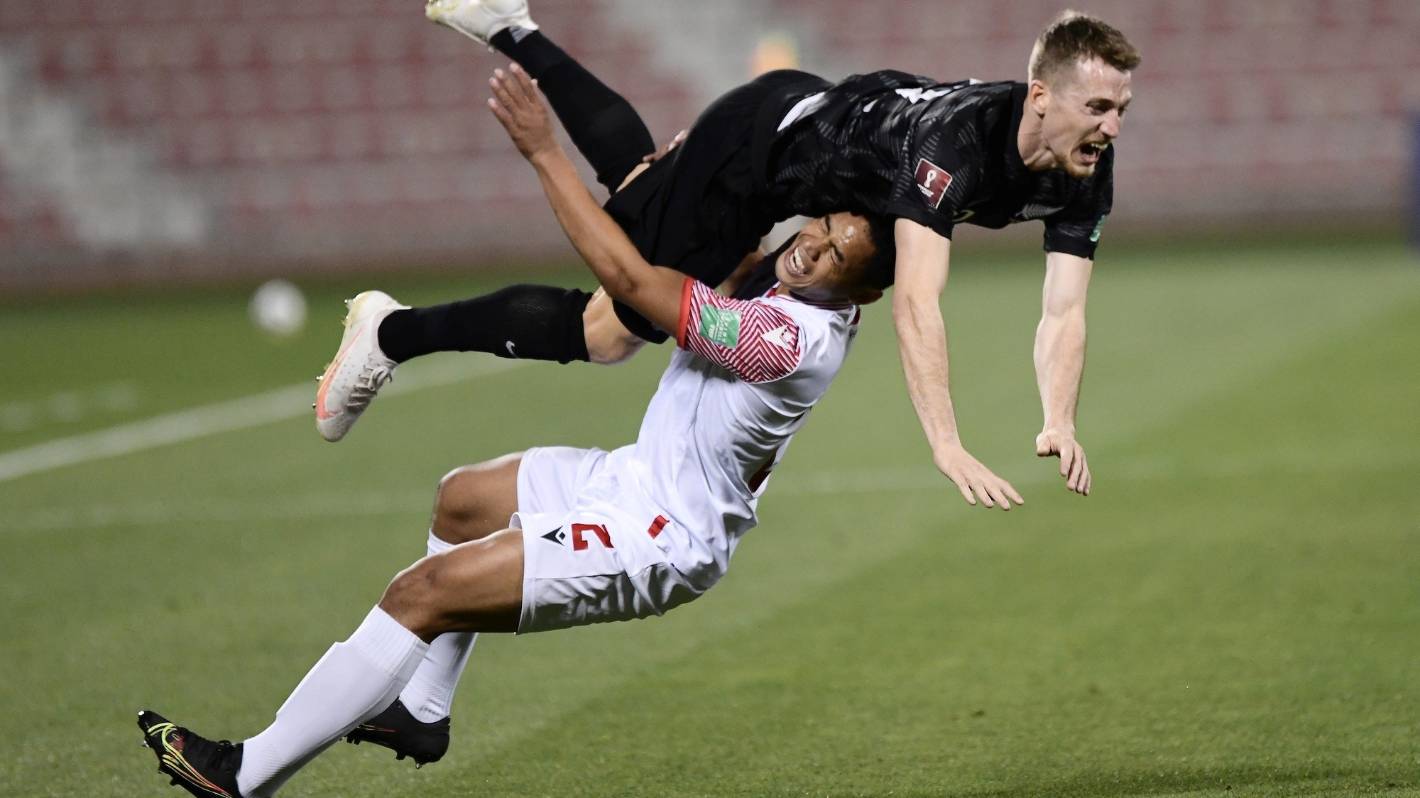 The All Whites are now only two wins away from qualifying for the World Cup after wearing down Tahiti to reach the final of the Oceania World Cup qualifying tournament.

Left wing-back Liberato Cacace scored the game’s only goal in the 70th minute to secure a narrow 1-0 win and a date with the Solomon Islands in the final on Thursday.

The All Whites completely dominated a physical semifinal at Grand Hamad Stadium in Doha on Monday, where both teams gave away 19 fouls, out-shooting Tahiti 16-4 and holding 68 per cent of the possession.

But despite their glut of chances, they were wasteful in front of goal and it was only with 20 minutes remaining that the All Whites found a breakthrough, with Cacace’s second-half strike proving the difference.

The Empoli defender, who made the initial burst into the box, scored his first international goal to cap off a memorable start to the year after some good hold-up play by Matthew Garbett inside the six-yard box.

A deflected cross landed at Garbett’s feet and with his back to goal he was able to flick the ball on for Cacace to run through and slot past Teave Teamotuaitau.

Garbett had squandered one of the All Whites’ best chances earlier in the game when he unable to keep his header down after making contact with a cross from Cacace.

Bill Tuiloma had a second-half header cleared off the line while McCowatt and Joe Bell both had shots from the edge of the box saved by Teamotuaitau.

Although the scoreline was tighter than they would have wanted, Tahiti never looked like scoring and one goal was all that was needed to secure passage through to Thursday’s final against the Solomon Islands.

Stefan Marinovic was a spectator in the All Whites goal, forced to make just one save, and an easy one at that.

All Whites coach Danny Hay made nine changes to the team that beat New Caledonia to top group B.

Cacace, Tuiloma, Bell and Marinovic were handed their first starts after arriving midway through the tournament in what was the strongest available XI.

Marko Stamenic sat out the game after picking up a hamstring niggle.

It took 70 minutes for the All Whites to find a breakthrough, but they got the goal they needed when Cacace pounced on a loose ball and fired home from close-range.

Where the game was won

The All Whites kept their composure despite some rough treatment from Tahiti and their patience was eventually rewarded when Cacace popped up with the match-winner.

Player of the day

Centre-back Bill Tuiloma put in a strong shift at both ends of the pitch. Was part of a defensive unit that restricted Tahiti to just one shot on target and had a powerful header cleared off the line in the second half.

The All Whites will now play the Solomon Islands in the final at 6am on Thursday after they beat Papua New Guinea 3-2 in Monday’s other semifinal. The overall winner will advance to the intercontinental playoff against the fourth place team from North and Central America and the Caribbean in June.