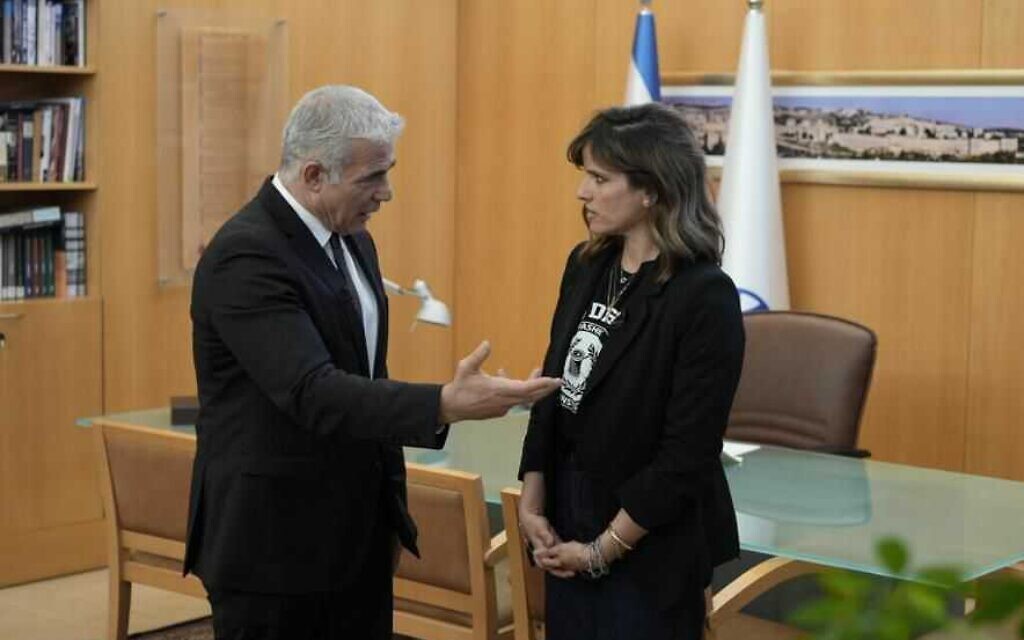 Tishby, an Israeli-born former soap opera star who moved to Los Angeles, where she has become an outspoken supporter of Israel on social media, will “act on behalf of the Foreign Ministry to spearhead initiatives worldwide before key audiences, generate an international dialogue, and respond to acts of antisemitism,” Lapid’s office said in a statement.

“The creation of this post and the appointment of Noa Tishby is another step that will strengthen Israel and our fight against antisemitism internationally at a moment when Jews around the world once again face an alarming and dramatic resurgence in antisemitism,” Lapid said, calling the 44-year-old “one of the world’s most influential Jews.”

In a video statement from Lapid’s office, Tishby called anti-Zionism and antisemitism “one and the same.”

She pointed to the surge in attacks on Jews around the world during and after last May’s Gaza war, arguing that “the danger facing Jews and the State of Israel is more prevalent now than at any time since World War II and the Holocaust.”

Tishby grew up in Tel Aviv and served in the Israel Defense Forces as a singer in a military band. She rose to fame for her lead role in the soap opera “Ramat Aviv Gimmel.” She would later co-produce the TV show “In Treatment,” an American spin-off of the hit Israeli series “B’tipul,” which Tishby sold to HBO.

I’m proud to name @NoaTishby as the first-ever @IsraelMFA Special Envoy for Combating Antisemitism & the Delegitimization of Israel. In this new role, Noa will be a powerful voice in the fight against the rising tide of hate directed at Jews and the State of Israel. pic.twitter.com/PJo4ZphMIt

In recent years, Tishby has become active in Israel advocacy.

Last year, she published “Israel: a Simple Guide to the Most Misunderstood Country on Earth,” which she describes as a history of Israel and Zionism.

Lapid’s announcement came less than two weeks after the US Senate confirmed Deborah Lipstadt to serve as special envoy to combat and monitor antisemitism.

But unlike Lipstadt, a Holocaust historian who was given the rank of ambassador, Tishby won’t be a government employee. It’s an unpaid position through the Foreign Ministry, and she will not need to be confirmed by any cabinet.