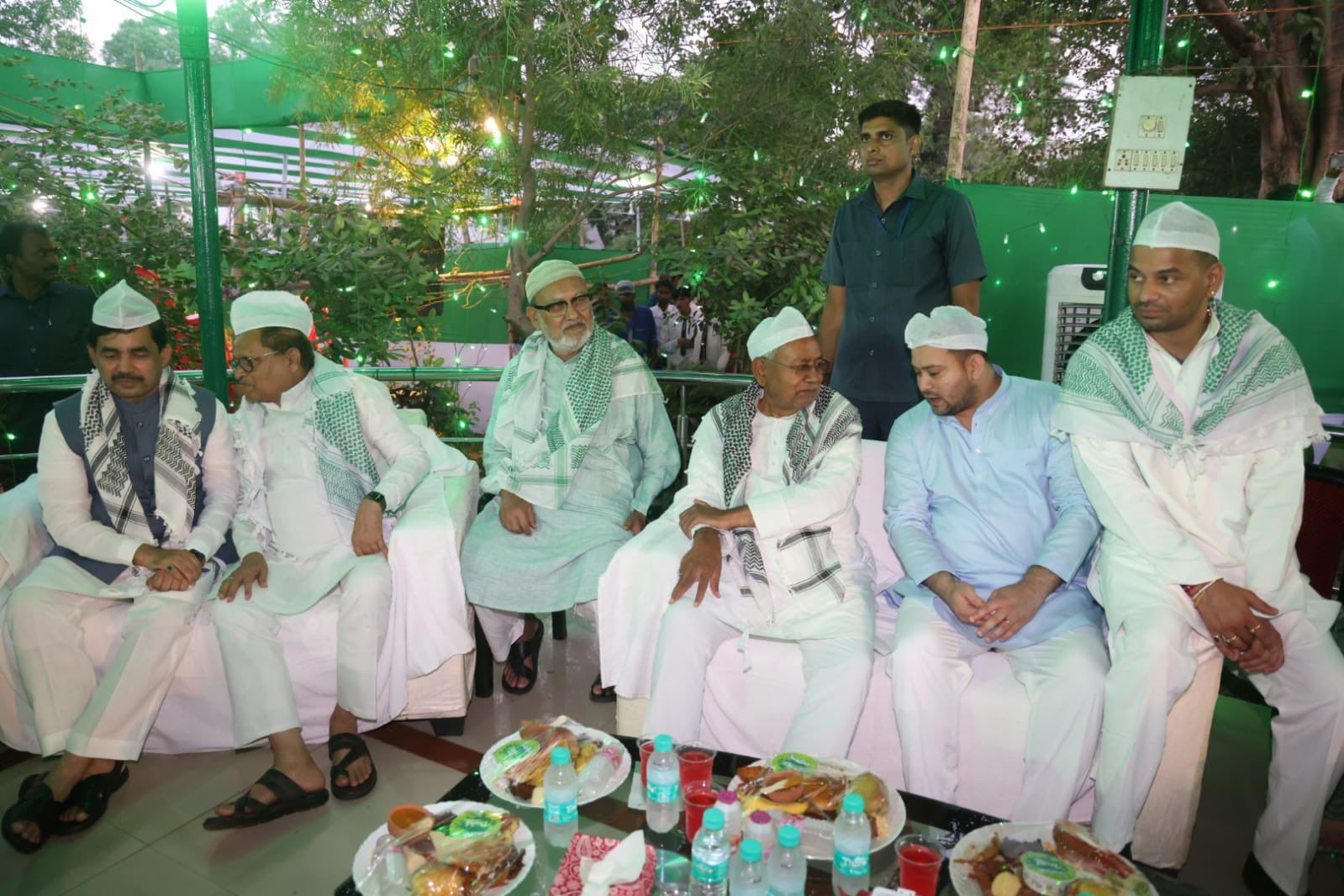 Patna: Hours after Bihar Chief Minister Nitish Kumar attended an Iftar party at the residence of former Bihar CM Rabri Devi, RJD leader and Lalu’s elder son Tej Pratap Yadav said that he had a “secret talk” with the JDU chief and that they will form a government in the state. Nitish Kumar’s visit to RJD leader Rabri Devi’s residence triggered speculation that he may return to the ‘Mahagathbandhan’. The chief minister was seen sitting with Tejashwi and Tej Pratap Yadav.Also Read – Mending Fences? Bihar CM Nitish Kumar Attends Iftar party at Rabri Devi’s Residence

“This is politics and chaos is usual… Today he is in power, tomorrow there could be a change. Earlier, I had put a ‘no entry’ board. But now it has been replaced with ‘Entry – Nitish Chacha ji.’ Now he has come,” Tej Pratap Yadav told news agency ANI. “We had organized an Iftar party where not just Nitish Ji, but BJP’s Shahnawaz Hussain, LJP’s Chirag Paswan and other leaders had also come,” Tej Pratap Yadav added. Also Read – Acute Encephalitis Syndrome: Bihar on Alert After Toddler Dies of ‘Chamki Fever’ in Muzaffarpur

#WATCH Patna: Earlier I had put up ‘No Entry’ board (for Bihar CM Nitish Kumar), & now I have put up Entry ‘Nitish Chacha Ji’ board, so he came… Since he came, govt will be formed…will form govt, it’s a secret. I had a word with Nitish Ji secretly: Tej Pratap Yadav,RJD (22.4) pic.twitter.com/XDKSAkyMwA

However, Lalu’s younger son Tejashwi Yadav didn’t make any such claim and said that it’s a tradition that everyone participates in the Iftar party.

Political acrimony gave way to social niceties as all members of Rabri Devi’s family, including her son and party heir apparent Tejashwi Yadav, accorded a warm welcome to the chief minister.

Once Kumar took his seat, Chirag Paswan, who had arrived a little earlier, greeted him by touching his feet. Those who might have been taken in by Chirag’s relentless attacks on the JD(U) leader, an old associate of his late father Ram Vilas Paswan, could hardly believe their eyes.

Chirag’s rebellion ahead of the 2020 assembly polls has been singularly blamed by the JD(U) for its losses at the hustings. Paswan junior has been relentless in his attacks on the CM, his own political isolation notwithstanding.

But it remained an occasion for bonhomie that belied the political equations normally on display in Bihar.

Kumar partook of the delicacies on offer, seated alongside Prasad’s maverick elder son Tej Pratap Yadav, in a gesture of avuncular forgiveness for the latter’s many personal jibes.

Seated at a close distance were other members of Prasad’s family, including eldest daughter and Rajya Sabha member Misa Bharti. The RJD supremo’s progenies may not be on the best of terms with each other but for the time being, they seemed to have left all behind.

With the release of their ailed and ageing father from jail still not in sight, the siblings were clearly drawing some comfort in the company of Kumar whom they have all called “chacha” (uncle).

Predictably, the social media was busy speculating if this was a sign of yet another political volte-face by Kumar.

The chief minister’s presence at Tej Pratap Yadav’s wedding a few years ago, when he was photographed hugging Prasad warmly, had led to similar predictions which, however, did not turn out to be correct.

Be that as it may, Kumar, who hosted an Iftar himself last week and has been making it a point to attend similar feasts organised by political peers, seems to have sent out a message loud and clear.

His old ties with the BJP notwithstanding, the Bihar CM has kept the politics of Hindutva at an arm’s distance and his gesture, less than 24 hours before Union Home Minister Amit Shah’s scheduled visit to the state, could not have been more loaded with meaning.