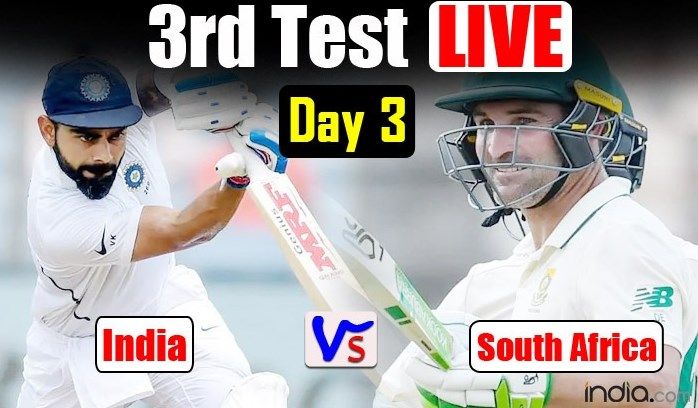 Kohli and Pant consolidate after India lose Pujara and Rahane early on Day 3. The lead is constantly growing and that is putting pressure back on the hosts. Remember, they would have to bat last with the series on the line they would have scoreboard pressure on them.Also Read – India vs South Africa 3rd Test, Day 3 Live Streaming – When and Where to Watch Ind vs SA Cape Town Match in India

IND vs SA Test LIVE, 3rd Test, Day 3: Virat Kohli and Cheteshwar Pujara made it to stumps on day two of third Test against South Africa at Newlands Cricket Ground here on Wednesday. At stumps, India are 57/2 in 17 overs, leading by 70 runs. In a see-saw day, India took a narrow 13-run lead as the pace attack shot out South Africa for 210. Jasprit Bumrah was the star with the ball, taking 5/42, his seventh five-wicket haul in Test cricket on a pitch which was aiding fast bowlers. Mohammed Shami (2/39), Umesh Yadav (2/64) and Shardul Thakur (1/37) were among the other wicket-takers for the tourists’. For South Africa, Keegan Petersen top-scored with a career-best 72. Also Read – Tu Chal Mein Aya: Twitterati Hilariously Troll Cheteshwar Pujara, Ajinkya Rahane After Yet Another Failure

22 wickets fell on the second day as Bumrah starred for India with five wickets. The hosts were bundled out for 210 runs which gave India a crucial 13-run lead. Unfortunately, India lost both their openers early and that shifted the balance of the game before Pujara and Kohli took charge of proceedings and ensured the side did not have any more casualties before stumps. India lead by 70 runs. The ball is fairly new and the first hour tomorrow would be critical in deciding the fate of the series. (FULL SCORECARD) Also Read – IPL 2022 in South Africa or Sri Lanka? Report Suggests BCCI Looking at Overseas Options Amid Rising Covid Cases in India