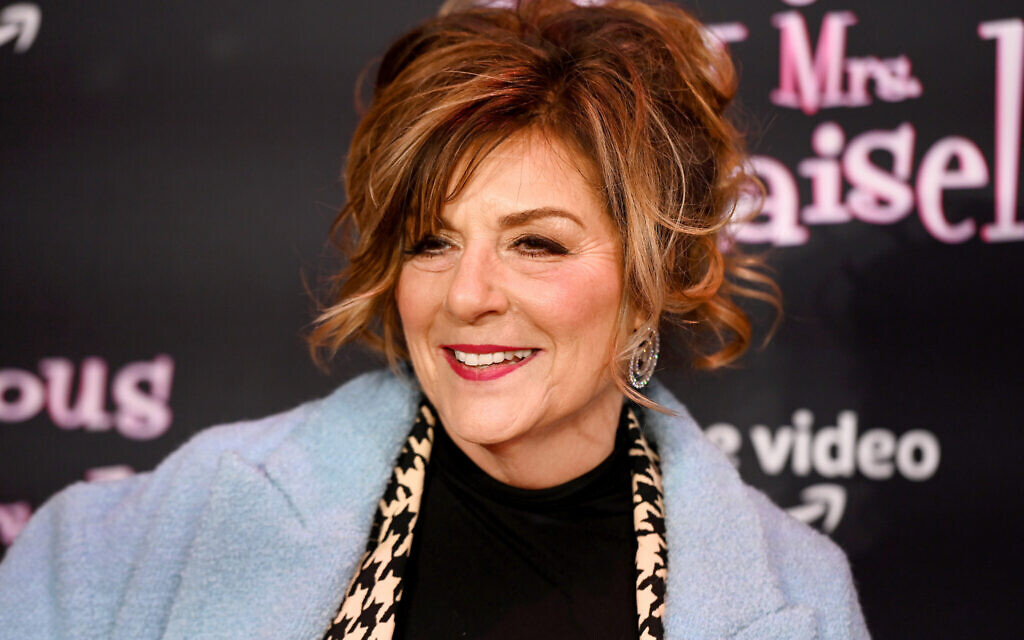 JTA — When she was cast as Midge Maisel’s mother-in-law in “The Marvelous Mrs. Maisel,” veteran actress Caroline Aaron had no idea that a series about a very particular slice of mid-20th century Jewish life would strike a chord around the world.

But its popularity has gone far beyond Jews and the Jewish-adjacent. Much like “Fiddler on the Roof,” the show has found an audience even in countries where Jewish culture is all but nonexistent.

“After the second season, we went to Milan to do international press, and there were journalists from all over the world — from China, and India, and all of the European countries, and I was like, what could possibly be of interest?” Aaron said during a recent Zoom talk hosted by The Braid, a Southern California Jewish women’s theater.

“But in this show, for people all over the world — and even though they were interviewing us — I had to interview them, just to find out what it was about this show that had enchanted audiences that had no cultural references.”

And what did she learn?

“I think first and foremost, family is a universal. I think no matter how it manifests itself, that deeply resonates with everyone,” said Aaron.

Aaron’s talk at The Braid served in part as a preview of the fourth season of “Mrs. Maisel,” which begins airing on Friday after a nearly three-year hiatus. In it, she talked about her long career as an actress in films by major Jewish directors, her Southern upbringing, and her thoughts on criticism that “Mrs. Maisel” cast too many non-Jewish actors as Jews.

In a career spanning 40 years, Aaron has appeared in multiple films from major Jewish directors such as Mike Nichols (“Heartburn,” “Working Girl,” “Primary Colors” and “What Planet Are You From?”), Nora Ephron (“Sleepless in Seattle” and “Lucky Numbers”) and Woody Allen (“Crimes and Misdemeanors,” “Alice” and “Deconstructing Harry”). On television, Aaron has appeared on “Curb Your Enthusiasm” and “Transparent,” and since 2017, has been portraying Shirley Maisel. Along with the rest of the “Maisel” cast, Aaron won the Screen Actors Guild Award for Outstanding Ensemble in a Comedy Series, in both 2018 and 2019.

She has also done notably Jewish-oriented work in the theater. She starred in a one-woman, two-character play about a Holocaust survivor called “Call Waiting,” later starring in the movie version as well. In 2016, she appeared in “Stories from the Fringe,” a play assembled from the voices of more than a dozen woman rabbis and presented at The Braid, then known as the Jewish Women’s Theatre.

In the Zoom talk, Aaron defended the casting of “Mrs. Maisel,” which includes Rachel Brosnahan as Midge Maisel, Tony Shalhoub and Marin Hinkle as her parents, and Luke Kirby as the legendary Jewish comedian Lenny Bruce. None of them are Jewish.

“I’m very concerned that we are confining the art of acting to ‘you have to be it to play it,’” Aaron said during the talk. “When all of this sort of started to dust up, I wanted to write to every parent in the country who’s writing a check for a performing arts program, to rip up their check… I think that acting in its purest form is taking a walk in someone else’s shoes. And ultimately, isn’t that the definition of empathy?”

When people ask Aaron if Brosnahan is Jewish, Aaron’s retort is that “if you’re asking, then she’s doing her job and she’s doing it well.” She added it goes the other way, too.

“I don’t want to be confined to only playing Jewish women,” Aaron said. “I want to play all kinds of women. And I think that acting is an art form like any other art form.”

Shalhoub is Lebanese-American, but has played numerous ethnicities throughout his career, including Italian-American and Jewish characters. The casting, she suggested, also serves a dramatic purpose. Midge’s ex-husband’s family is played by Jewish actors (with Aaron and Kevin Pollak as the parents, and Michael Zeglen as Joel, the ex.) She added that while it may not have been intended that way, the casting serves as something of a meta-commentary on the two families: Midge’s family, the Weissmans, are notably more assimilated than the Maisels.

She also praised the show’s writing, and was clear that while the scenes of Jewish characters “living at the top of their lungs” often appear improvised, the show is scripted “down to the comma.” She contrasted that with her turn early in the run of “Curb Your Enthusiasm,” in which “not a word is written down.”

Aaron has been playing Jewish characters from New York throughout her career (she played Woody Allen’s sister in two different movies), but she actually comes from Richmond, Virginia, and as she made clear in the Braid talk, her Southern Jewish heritage is very important to her. “I didn’t even know, when I was growing up, of [the stereotype of the] New York Jewish mother, or a Jewish girl. I had no idea of where that was coming from, because it wasn’t around me.”

Born Caroline Abady, she took her father’s first name as her last name early in her career because her older sister, Josephine Abady, was already a well-known theater director and Aaron wanted to stand apart. After doing so, Aaron said, she went to see her agent, who told her “now everyone’s gonna know you’re Jewish.”

Aaron’s mother Nina Friedman Abady, born in Georgia and raised in Alabama, was widowed at a relatively young age. She later became a professor at an historically Black college and a civil rights activist. The Nina F. Abady Festival Park in Richmond is named for her.

Her mother’s example inspired Aaron to write “The Mother Lode,” which was performed last month as part of “Sweat Tea and the Southern Jew,” a Braid production featuring stories of Southern Jews. It was held in person in locations across the Los Angeles area and broadcast live on Zoom.

“I did have something special with my mother,” Aaron said. “And I still cherish it to this day.”