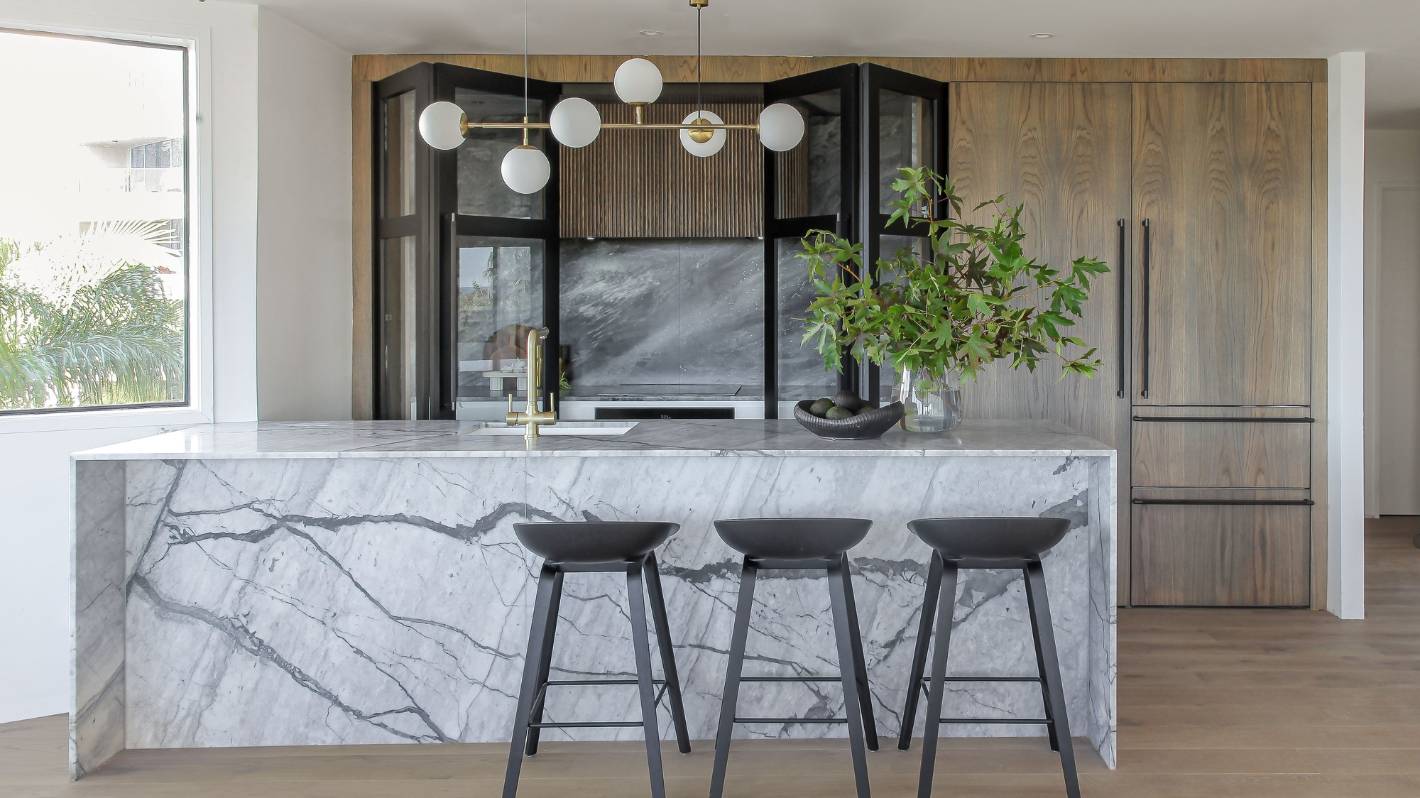 This new kitchen in a Mon Desir apartment in Takapuna features a bank of glass doors that screen off the cooking area when not in use.

Decor-wise, the ‘80s had a lot to answer for – and the pokey, peach-pink, U-shaped kitchen in this Mon Desir apartment in Takapuna, Auckland was a pretty good example.

Kitchen designer Kate Gardham of Sticks + Stones says new owners Sandy and John bought the apartment with the intention of renovating and making it their forever home to enjoy in their retirement.

They loved the sea views out to Rangitoto Island, and the buzz of the local cafés, restaurants, bars and beach. In fact, Gardham says Sandy joked that she was more likely to store her sweaters in the oven like Sarah Jessica Parker from Sex in the City, than cook elaborate meals.

But the couple did give the designer a brief: “They wanted an island that they could sit at and read the newspaper with their morning breakfast and coffee as this is their favourite daily ritual.”

“Sandy wanted something special, as she had run her own successful business and was looking forward to a kitchen that would give her pleasure aesthetically, and be enough for them to potter around in for making coffee and toast. They are no strangers to the local Takapuna restaurants and bars here, and like to dine out frequently.”

Gardham says the kitchen needed to be unique to the couple – wow factor was mentioned. And they didn’t want an all-white kitchen. “They were after something with a bit of texture and colour.”

In an unusual move, the designer chose to position the entire cooking area behind Häfele bifolding glass doors, with a beautiful Princess Grey granite benchtop and splashback creating an element of surprise when the doors are opened.

In contrast, the island features Statuario Silver honed marble: “When we went shopping for the slabs, Sandy was unsure at first about mixing the two stones’ colourways, but as we had worked together on other homes, she trusted my decisions here, and now she says this is her favourite part of the kitchen. She loves the movement, texture and colours in both stones.

Reeded timber was added to the custom-made curved rangehood, with the granite splashback extended to wrap right around the top, bottom and sides.

“We felt this subtle curve connected with the architecture of the large curved windows in the adjoining dining space, while keeping all the other lines clean and simple to balance out,” Gardham says.

“The key factors I considered for the flow and functionality of the kitchen were defining the areas between cooking and cleaning. In the original kitchen these tasks were overlapping side by side, so dirty dishes would be stacked up where you wanted to land a pot after cooking.

“Changing to a galley-styled kitchen and removing two corner cupboards, so that they could access all the drawers front-on, was more practical. I wanted to futureproof the kitchen for the couple.”

Gardham designed an appliance pantry for a toast and drinks station: “John is allowed in here and can make his mess, and Sandy can shut the door and the rest of the kitchen is left clean and tidy.”

The sink is positioned on the island to maximise the view, even though Gardham says it was tricky with the plumbing constraints of the apartment building. “We overcame this by building a ‘packer’ on the end of island to hide pipes and this was covered by the stone waterfall end and bar-back.”

The team also had to ensure the stone slabs were of a size that could fit in either the lift or stairwell.

And, despite numerous Covid-related delays with supply, the owners chose to wait it out to get the stone specified, and they say it was “definitely worth the wait”.

The kitchen was Highly Commended in the 2022 TIDA New Zealand Kitchens awards.

The Kitchen of the Week is supported by Resene. Find more inspiration in Resene’s kitchen decorating gallery.

Kitchens don’t get much better than this – these are the 2022 TIDA New Zealand Kitchens of the Year.