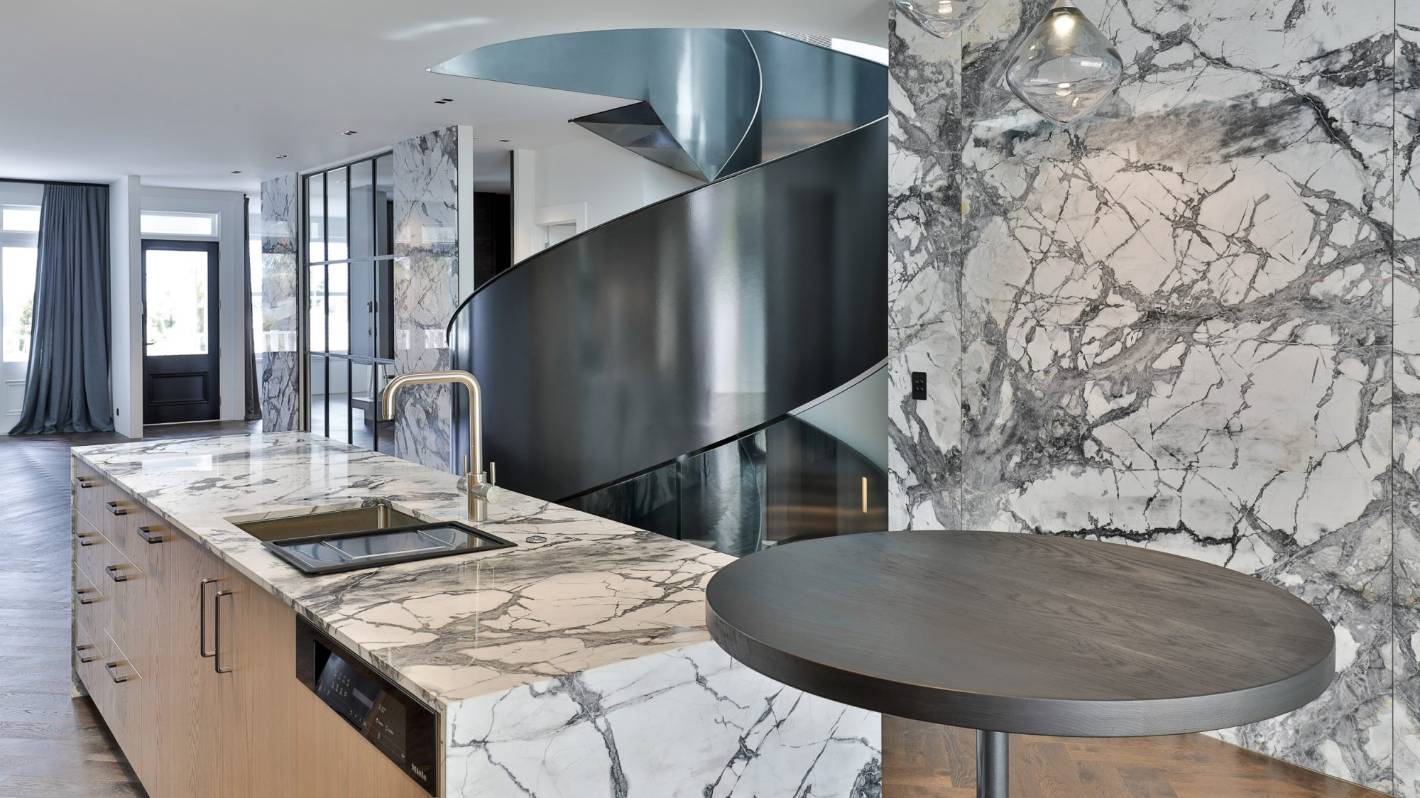 This new kitchen in a remodelled St Marys Bay villa teams oak veneer cabinetry with imported Carrara marble. The marble not only wraps the island, it also lines the walls. Steel windows indoors separate the kitchen from a study with a fireplace.

No expense spared – this new kitchen in a remodelled villa in St Marys Bay, Auckland doesn’t just have one standout feature; it has many.

Builder-renovator Cameron Ireland, who has a renovation business, says the villa was bought before the work was finished, which meant the new owners were able to have a say in how the kitchen looked.

And one of the biggest items on their wishlist was expensive Carrara marble, specially imported from Italy. The beautiful marble wraps the top, sides and front of the large island in the kitchen. Large slabs clad the walls, and the treads in the magnificent steel spiral staircase are also Carrara.

But the use of marble doesn’t stop here – a lighter-veined Carrara also lines the bathroom walls and features on the vanity tops.

In the kitchen, the marble is teamed with light oak veneer cabinetry and an oak laminate floor laid in a herringbone pattern – this was chosen for its durability.

Ireland added a round table top to the end of the island, created a bar area, where people can mingle. It is opposite a wine refrigerator at one end of the kitchen.

The kitchen is in the old part of the house – the renovation kept much the same footprint, going up and down, rather than out.

Ireland introduced another touch of modernity, with steel windows opening up to the outdoors. There are also internal steel windows that open to a study with fireplace.

The owners opted for high-spec kitchen appliances from Sub-Zero and Wolf.

To cater to summer living, Ireland added a built-in concrete outdoor kitchen, that is essentially an extension of the indoor one on the other side of the steel windows.

This provides a barbecue area, beer fridge in a beautiful, newly landscaped courtyard.

Overhead louvres ensure it is an outdoor living area for all seasons.

Kitchens don’t get any better than this – these are the 2021 TIDA New Zealand Kitchens of the Year.