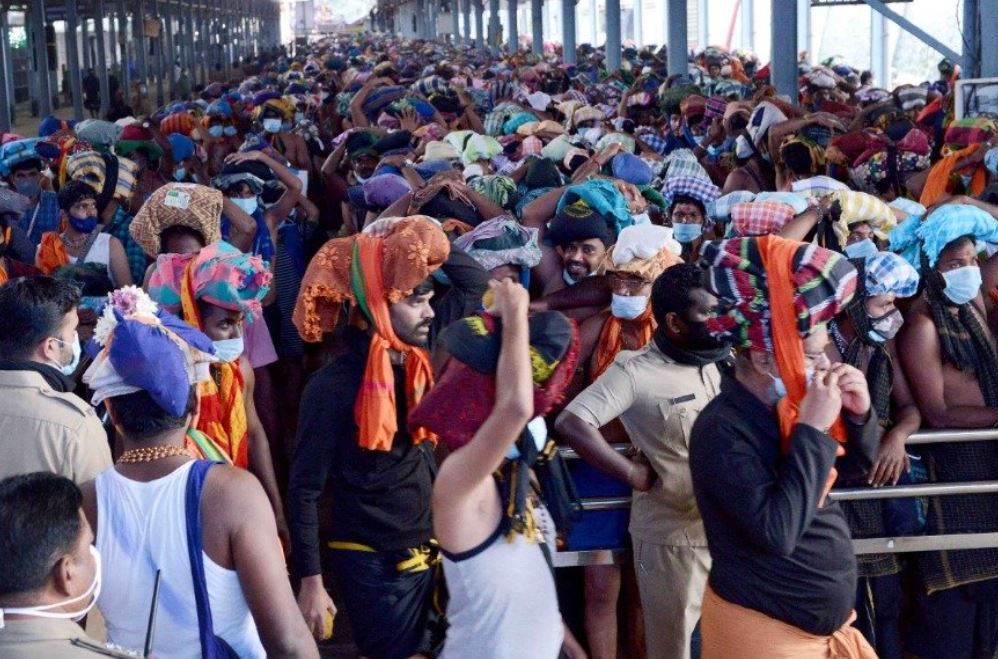 Kochi: Amid the two-month-long annual pilgrimage season and Mandalam-Makaravilakku festival, the Lord Ayyappa temple in Kerala’s Sabarimalahas witnessed a heavy rush of pilgrims in the last few days. Earlier on Saturday, over 42,354 people booked virtually to pay obeisance at the temple. And, as per the Kerala government, as many as 27840 pilgrims visited the temple on Friday and 42,354 people had booked to take ‘darshan’ on Saturday.Also Read – Centre Warns 5 States, 1 UT Amid Rising Covid Cases; Tells Them to Curb Infection, Fatality | Check List Here

“Police allow pilgrims to enter the shrine after sanitization and give masks to those who require,” the government said. The virtual queue booking for the hill shrine of Sabarimala is almost complete from December 9 until the end of the Mandala-Makaravilakku (Makar Sankranti) festival. As per the state government, about 45,000 people a day, including 40,000 via virtual queue system and 5,000 through spot booking, will get the opportunity for darshan. Also Read – CPI (M) Leader PB Sandeep Kumar Stabbed to Death in Kerala’s Thiruvalla,

Lord Ayyappa temple Sabarimala has been opened for Mandala-Makaravilakku, which will last for two months. The temple will remain open till December 26 for Mandalapooja. The temple will again be opened on December 30 and darshan will be allowed till January 20 for Makaravilakku festival. Also Read – Mandatory RT-PCR Test, 14-Day Quarantine: How Airports Across Country Gearing up to Tackle Omicron Variant | Key Points

The Devaswom Board has set up special counters to collect ghee for anointing from the pilgrims as a direct anointing facility is not allowed.
“The devotees can collect anointed ghee from the counter near Sannidhanam police station using the receipt received from the counter, and prasadam from the prasadam the counters,” the organisers said. In addition to the virtual queue booking system, spot booking is also possible. A maximum of 5,000 people a day are allowed to visit through spot booking.