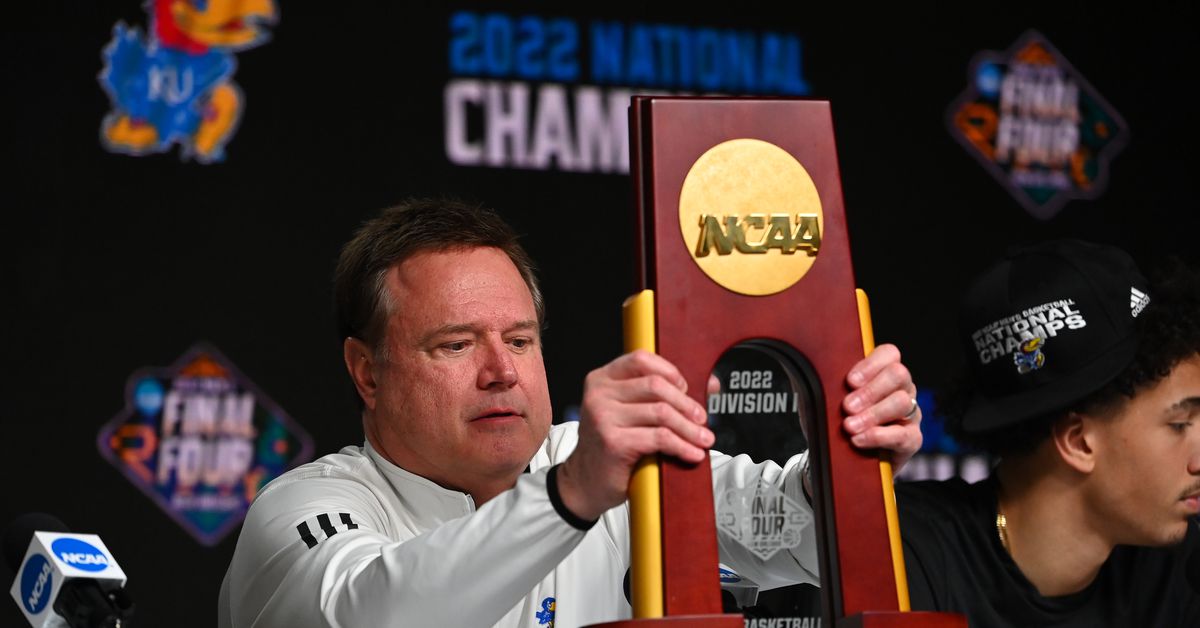 For Jayhawk fans, this not-so-simple fact is all that matters at the present moment and all that will matter in the immediate days and weeks ahead. That’s good. That’s the way it should be.

For KU head coach Bill Self, things are also pretty great right now. They might be about to get a little complicated in the not so far away future.

With the win inside the Superdome, Self became just the third active coach in college basketball with multiple national championships, joining Jay Wright and Rick Pitino. He also became the first coach in the long and storied history of Kansas basketball to bring more than one national title back to Lawrence.

Self’s two championships will be remembered as a pair of historic comebacks.

Against John Calipari and Memphis in 2008, Kansas trailed by nine points with just 2:12 to play. Some missed free-throws by the Tigers and a Mario Chalmers three right before the regulation buzzer sent the game to overtime, where the Jayhawks prevailed, 75-68.

On Monday night against North Carolina, Kansas pulled off the largest come-from-behind victory in national championship game history, coming from 16 down to knock off the Tar Heels, 72-69. The Jayhawks also became the first team to trail by 15 or more at halftime of the national title game and come back to win.

Self is now staring down, potentially, a third monster career comeback that might wind up being his most important.

You wouldn’t have known it by listening to either of Kansas’ Final Four broadcasts on TBS, but the Jayhawks are facing allegations from the NCAA of five Level I violations. Self is named directly in three of the Level I violations, which are the most serious the NCAA doles out.

There is good news for Kansas, though. In its only ruling thus far, the Independent Accountability Resolution Process, which KU is using for its case, let NC State off with what most would consider a slap on the wrist. The biggest reason why?

“We didn’t want to hurt or punish the student-athletes who were currently competing,” IARP member Dana Welch said.

In the weeks that have followed, NCAA president Mark Emmert has echoed this sentiment.

Mark Emmert says the process to adjudicate the cases stemming from the FBI investigation has “taken way too long.” Said he thinks the process needs to be “fair, swift and not punish the innocent — those who were not involved in the activities.”

While NC State was dealing with two Level I violations compared to Kansas’ five, the quotes from Welch and Emmert still feel important. After all, there is no player on KU’s current roster who was involved in any of the alleged wrongdoing that took place 4-6 years ago.

Of course, there is one key figure featured prominently in the NCAA’s Notice of Allegations who was with the Kansas basketball program at the time of the alleged violations and who remains the face of the Jayhawk basketball program.

While coaches like Rick Pitino (Louisville), Mark Gottfried (NC State … and Cal State Northridge), Sean Miller (Arizona) and Will Wade (LSU) have all lost jobs at least in part due to the FBI’s corruption scandal, Self has not only remained at Kansas, he’s thrived. The Jayhawks went to the Final Four in 2018, were a 4-seed in 2019, were set to be the pre-tournament favorites in 2020, were a 3-seed in 2021, and are now currently sitting on top of the college basketball world.

Mike Krzyzewski just called it a career at age 75. Roy Williams did the same thing last year at 71. Self doesn’t even turn 60 until Dec. 27 of this year. There are some who will tell you he is the best active coach in college basketball right now, and with the current landscape of the sport, it’s not difficult to predict that some of his best years could still be in front of him.

This is where the sinister but that has been looming on the periphery of this story finally jumps in and takes center stage.

Trying to predict exactly what the NCAA is going to do is an errand as foolish as filling out a bracket in early March, but Self not being on the sidelines the next time Kansas plays a real game feels about as safe as picking a 2-seed to take care of a 15. Sure, we might have a Saint Peter’s situation on our hands where Self inexplicably skates completely, but a Villanova-Delaware scenario is still the much safer bet.

After 19 years of top-level success, Self has nothing left to prove, even with all of this suspension speculation swirling around him. So what’s next?

The obvious and most likely answer is that he swallows whatever shit sandwich the NCAA gives him and then goes back to expanding the empire he’s already built in Lawrence. But is there another challenge out there that might entice him? The NBA? A different top 10 job in the sport? Taking some time away from the sport entirely? West Coast mini-concert tour with Snoop?

Again, the more likely scenario is that in a couple of years we’re back to business as usual for Self and Kansas, and the Jayhawks are right back to doing what we expect them to do: Win Big 12 titles and chase national championships. For the well-being of a sport that has lost two of its most legendary head coaches in the last two years and is on the precipice of losing a few more in the years immediately ahead, that’s probably for the best.

But, there is an awkward and unpleasant journey that needs to be taken and completed before any of that can transpire. For now, Kansas fans should pretend this chapter doesn’t exist.

Soon, though, Self will have no choice but to turn that next page.