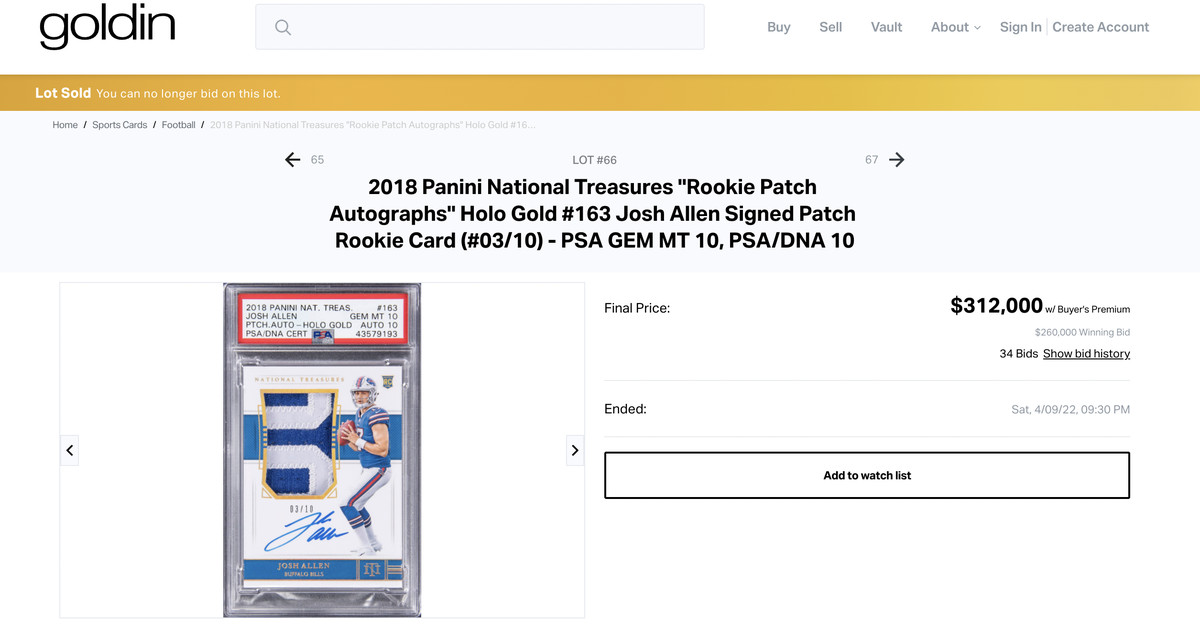 This weekend a Josh Allen rookie card from 2018 sold at auction for an astonishing $312K, the highest price paid for any card by the Bills’ QB. Once thought to be a pandemic-fueled bubble, the world of sports cards has now shown it’s here for the long haul in the world of big-money collectibles, and it’s not slowing down.

The value of this card is attributable to a lot of reasons. Firstly, you have the obvious, which is speculation that Allen will end up being an all-time great player. Then, you have a signed rookie card from 2018, before the bubble really blew up, at an of-10 rarity — meaning only 10 cards were made that includes a piece of Allen’s jersey, as well as his autograph. Next you have a patch, meaning it contains part of the name or number from a jersey. Finally you have a PSA grade of a gem mint 10, the highest a card could possibly receive.

That final element, the grade, is where a lot of cards can falter. Often cards can get dinged on grade by no fault of the person who opened the pack. If the centering isn’t perfect when the card was cut my the manufacturer, or there’s a small printing blemish in its creation, then a card will not earn a 10 rating. So, when it comes to Josh Allen cards this is really the Holy Grail … at least for now.

While the idea of spending as much on a football card as you could buy a house might cause you to roll your eyes, for collectors it’s about future investment. An 8.5 graded Tom Brady rookie card sold at auction for $1.88 million a year ago. Still, cards like Allen’s or Brady’s don’t come remotely close to the current record for a football card. Now, and for the foreseeable future, nothing will top the 1-of-1 (meaning only one was made) 2017 Patrick Mahomes rookie auto card that fetched an inconceivable $4.3M in 2021.

Despite only grading to an 8.5, this card is so rare, and banks on Mahomes cementing a place in the Hall of Fame. Time will tell whether card investments like this end up paying off, or how much higher the market can go.