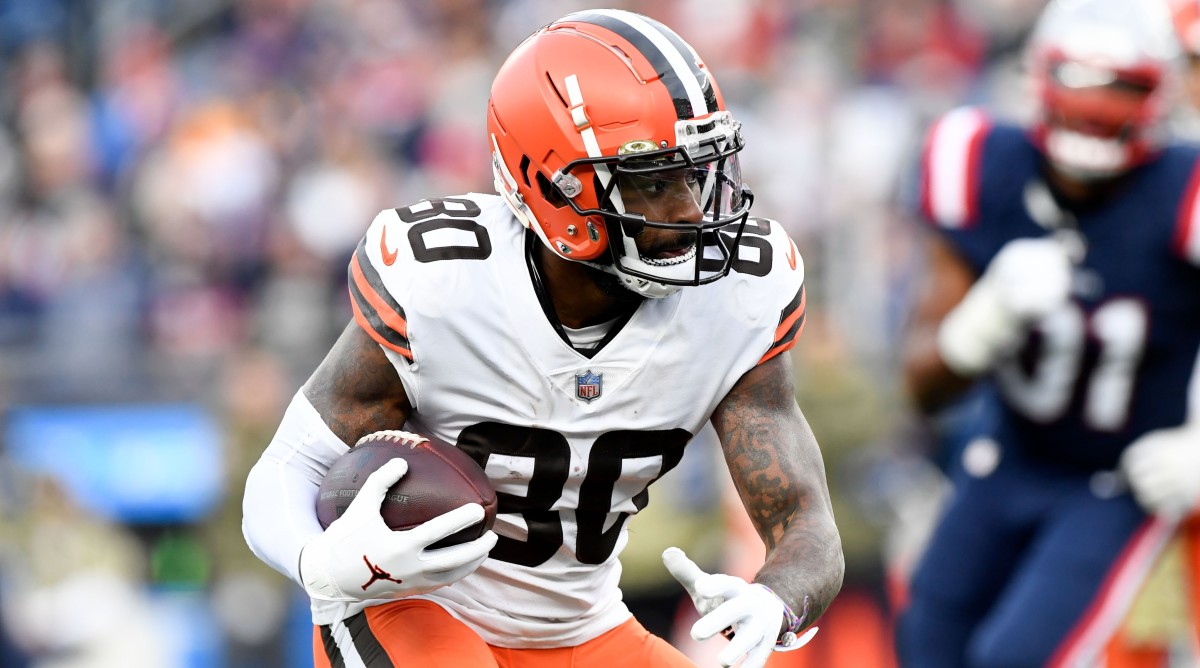 Editor’s note: This story contains accounts of sexual assault. If you or someone you know is a survivor of sexual assault, contact the National Sexual Assault Hotline at 1-800-656-4673 or at https://www.rainn.org.

Two week after his release, wide receiver Jarvis Landry and the Browns have “mutual interest” in a reunion in Cleveland, Landry’s new agent Roosevelt Barnes told Mary Kay Cabot of Cleveland.com on Monday.

“That’s his home and he loves it there,’’ Barnes said to Cabot. “There’s mutual interest in him being back back there, but Jarvis also has interest from some other teams as well.”

According to Cabot, the Chiefs are among the other teams interested in Landry after the AFC West franchise traded All-Pro receiver Tyreek Hill to the Dolphins. The 29-year-old Landry has reportedly visited with several teams but has expressed a desire to sign sooner rather than later.

One of the reasons for Landry’s renewed interest in a return to Cleveland is the team’s recent addition of quarterback Deshaun Watson. The former Texans signal-caller landed on the Browns through a trade on March 18, exactly a week after a grand jury in Brazoria County, Texas decided not to indict Watson on nine criminal complaints against him.

“When you’re a receiver, you always want to play with a great quarterback like Deshaun,’’ Barnes said, per Cabot. “Jarvis has always had a special place in his heart for Cleveland, but Deshaun being there makes it more intriguing.”

Watson, 26, still faces 22 active civil lawsuits that detail graphic accounts of sexual harassment and sexual assault that occurred during massage therapy sessions. These accounts range from Watson refusing to cover his genitals to “touching [a plaintiff] with his penis and trying to force her to perform oral sex on him.” According to Jenny Vrentas of The New York Times, the criminal complaints he previously faced involved similar descriptions, including Watson’s ejaculating on them and either other forms of sexual assault or attempted sexual assault.

The newly acquired Cleveland quarterback said during a Friday press conference that he planned to fight to clear his name in court, rather than settle.

Landry, 29, was released by the Browns ahead of free agency earlier this month just two days after the team executed a trade for former Cowboys wideout Amari Cooper. He was due to earn $14 million in 2022 prior to his release.

During a difficult 2021 campaign in Cleveland, Landry finished the season with a career-low 570 receiving yards after appearing in just 12 games. He hauled in 52 total receptions and two touchdowns as the Browns limped along to an 8–9 regular season record.