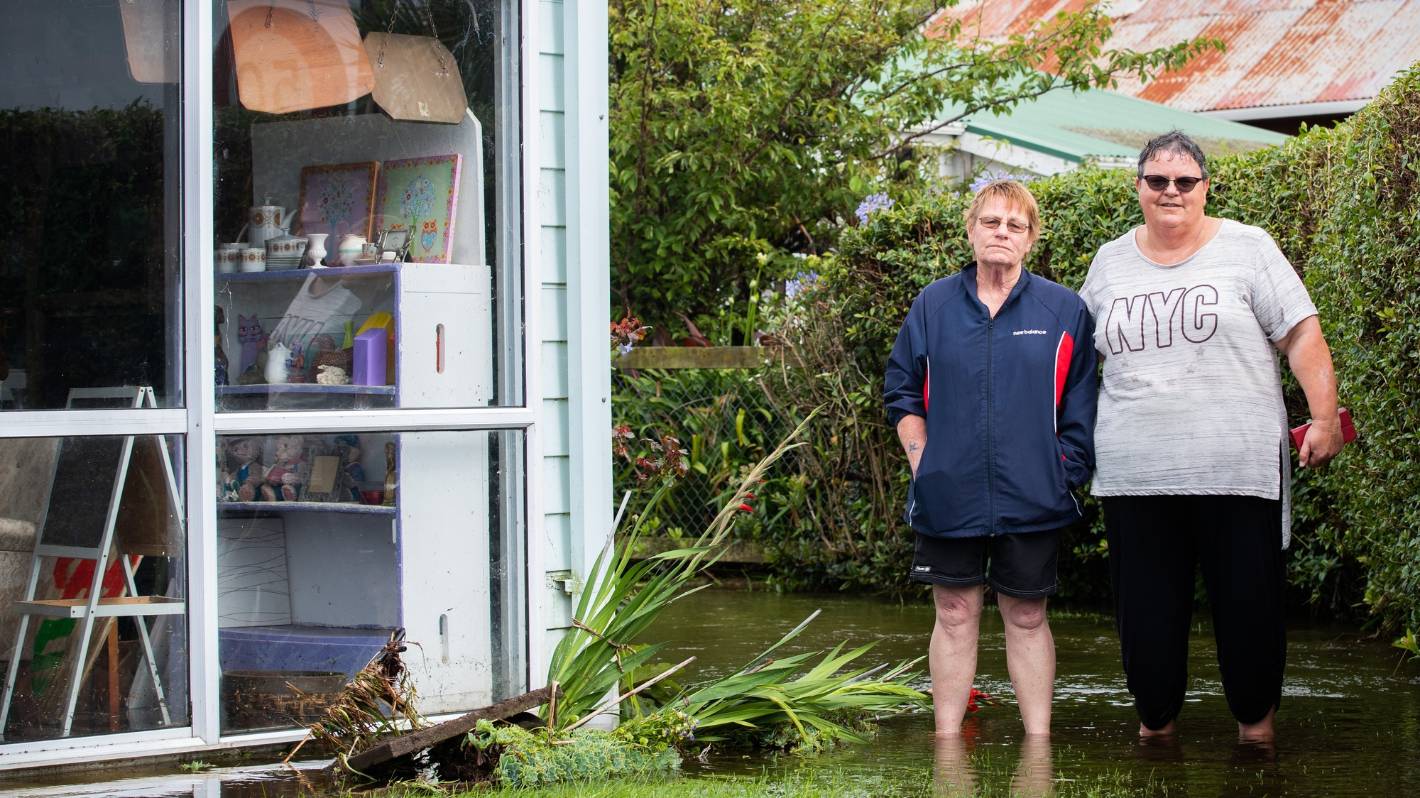 Less than 24 hours after finding out their mother had terminal cancer, sisters Angela Kearvell and Francis Smith were preparing to evacuate their coastal Taranaki home as floodwaters threatened.

Taranaki Regional Council rainfall data from Cape Egmont, less than 10 kilometres away, showed 76.4 millimetres of rain came down on Wednesday – the most the area had seen in a 24-hour period this year.

The region has had a month’s worth of rain in four days, with downfalls hammering much of the country in recent days.

Kearvell, who was visiting her from Waikato, woke about 5am on Thursday, but couldn’t see anything outside.

READ MORE:
* Taranaki is not immune to flooding – are you prepared for the worst?
* Heavy rain warning for Taranaki Maunga, watch for North Taranaki
* Heavy rain causes flooding in Feilding, residents told to be ready to leave

A coastal Taranaki town is in clean-up mode after floodwaters rushed through it on Thursday morning.

When she got up again and looked out to State Highway 45, she got a shock.

“I thought hell, there should be a road out there.

“I opened the shed door, and it was dry. Five minutes later it was halfway inside the shed. It was up to my knees.”

She woke her sister and went to their mother Bev Burkitt to “get her up and get her dressed”, out of fear the floodwaters would get worse and they would have to evacuate.

“We could hear the water lapping underneath the house.”

At its peak, the water was about six inches deep, and completely flooded the shed.

The family know everything in there can not be saved, as they say Rāhotu is on a sewerage system and didn’t know what was in the water that flowed through their property.

That was also the story with Smith’s vegetable garden, and her mum’s flowers, which were destroyed.

It was another blow for the family, as on Wednesday they discovered their mother’s cancer was terminal.

Megan Dymond, of the Opunake Emergency Management Group, was manning traffic control outside the family’s home, warning cars to slow down to avoid pushing more water into the property.

The self-employed lawn mowing contractor had a friend contact her saying they couldn’t drive through Rāhotu on Thursday morning, and knew she had to crack into gear.

“It was gushing like a river. We just wanted to make sure everyone’s OK.”

Up the road at Camp Egmont Hall, firefighters were working to clear the wooden floors of water.

Rāhotu firefighter Kelvin Jordan was on the mop, and had been working since the siren went off around 6am.

He said there had been a number of callouts and while there was a lot of water about, they didn’t have to rescue anyone from their homes.

The camp’s chief caretaker Elva Symons was working alongside Jordan – with a smile on her face.

Symons, who has been living in Rāhotu for 43 years, woke to her own house flooding.

“It’s alright, it’ll dry out. It was only a couple of inches in the laundry.”

Instead of tending to her own home, Symons made her way to the hall and called on the local brigade.

It is the third time Symons has seen such flooding.

She said the trick was drying things out “slowly”.

“You just can’t worry about it.”

Meanwhile, days of heavy rain have caused a number of sewage overflows around the New Plymouth District, including at the city’s iconic Pukekura Park.

A discharge of untreated sewage occurred at the park early on Thursday.

The district council was working to clear the discharge and stated it would be contacting iwi, hapū, the Taranaki Regional Council and Taranaki District Health Board.

Signs have also been put up along the coast at sites in New Plymouth Huatoki Stream, Te Henui Stream and Waiwhakaiho River warning against swimming and collecting kai.

Wastewater was also being discharged out to sea at the Te Henui pump station’s Eliot St outfall, more than 100m offshore.

At midday on Thursday the council said the Te Henui station’s pumps were operating at 100 per cent but the volume of wastewater and rainfall was greater than the station could handle.