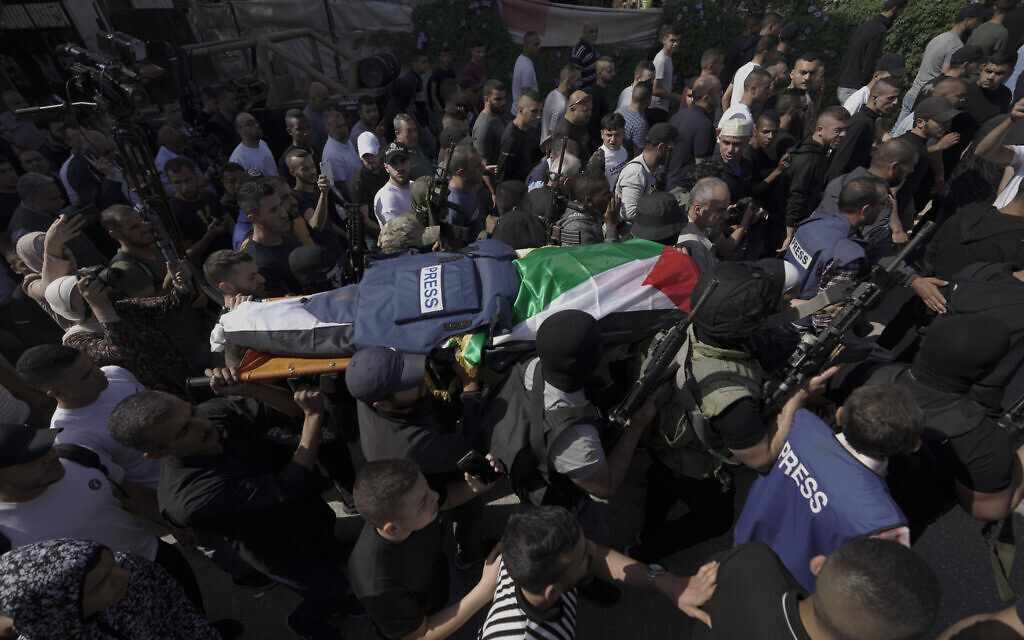 Israeli and Palestinian officials are holding talks about cooperating on an investigation into the death of Al Jazeera journalist Shireen Abu Akleh, Wednesday reports said.

A ballistics probe is needed to determine whether she was killed by Israeli or Palestinian gunfire, and officials on both sides are in contact about the process, Channels 12 and 13 reported.

Abu Akleh, 51, was shot in the head while covering an Israeli army operation in the West Bank city of Jenin. The Palestinians blamed Israel for her death, while Israeli officials said Palestinian gunmen may have fired the fatal shot.

The Ynet news site said Israeli officials have requested the bullet that killed Abu Akleh be transferred to Israel for a ballistics probe, and had offered for an international authority to get involved, possibly from the US.

The White House has asked the Palestinian Authority and Israel to open a joint investigation into Abu Akleh’s death, the Walla news site reported, citing two sources familiar with the matter.

Israel told the US it was ready to cooperate on an investigation, and the Palestinians have not yet responded, the report said.

Channel 12 reported that the bullet in question is a 5.56×45mm NATO round, which is used by both Israeli troops and Palestinian terrorists for weapons including M16 and M4 assault rifles.

Shireen Abu Aqleh, 51, a veteran Al-Jazeera journalist who was shot and killed during an Israeli raid in Jenin on Wednesday, May 11, 2022 (courtesy)

An initial autopsy of Abu Akleh’s body by Palestinian coroners said that she died after being struck in the head by a bullet fired from “over a meter away.”

“The bullet that entered her body is in our possession and has been taken to the lab for further analysis,” said the head coroner, Dr. Ryan al-Ali of the Pathological Institute at the a-Najah University in Nablus.

Al-Ali emphasized that the findings were only preliminary and that it could not be definitively determined from how far away the bullet was shot.

He also said that Abu Akleh died from the bullet wound itself, and not from loss of blood or any other injury.

Abu Akleh was set to be laid to rest in Jerusalem on Thursday.

IDF Chief of Staff Aviv Kochavi speaks during a ceremony on the second night of Hanukkah, at the Nativ program on the Kiryat Moriah campus in Jerusalem, on November 29, 2021. (Olivier Fitoussi/Flash90)

“In the course of the [IDF] activity overnight, the Palestinians carried out widespread gunfire at our forces — wild, indiscriminate fire in all directions,” said Kohavi. “The journalist who was killed was present inside the area of the fighting.

“At this stage, it is not possible to determine whose gunfire she was hit by and we are sorry for her death,” Kohavi added, apparently slightly backtracking from earlier statements from Israeli officials that said Abu Akleh was “likely” hit by Palestinian bullets.

“In order to get to the truth, we have set up a special team that will clarify the facts and present them in full and as soon as possible,” Kohavi went on. The investigation team will be headed by Col. Meni Liberati, the head of the IDF’s Commando Brigade.

“The soldiers operated under fire, and showed courage and determination to protect the citizens of the country, and we will continue to do so wherever we are required,” Kohavi said.

Calls for an investigation have also been voiced by the international community.

US State Department spokesperson Ned Price said the US demanded an “immediate and thorough” investigation into the killing of Abu Akleh.

Born in Jerusalem, Abu Akleh spent time in the United States as a child and held US citizenship along with her Jerusalem residency card.

“We are heartbroken by and strongly condemn the killing,” Price said.“Those responsible must be held accountable,” he said.

“Her death is an affront to media freedom everywhere,” he said.

United Nations Middle East envoy Tor Wennesland similarly called for an “immediate and thorough investigation,” without specifying who was responsible.

“I strongly condemn the killing of Al Jazeera’s reporter, Shireen Abu Akleh, who was shot with live fire this morning while covering an Israeli security forces’ operation in #Jenin, in occupied West Bank,” Wennesland said.

The European Union called for “a swift and independent investigation to bring the perpetrators to justice.”

Tensions have soared in the West Bank in recent weeks. Palestinian terrorists, many from the Jenin area, have crossed the fence into Israel to commit terror attacks, part of a bloody wave of violence that has left 19 people dead in Israel and the West Bank since late March.

Israeli forces have responded by cracking down in Jenin, stepping up raids and arrests in an attempt to restore order, and by stepping up patrols along the West Bank border. The security operations have often led to armed clashes with Palestinians.

According to the Palestinian Authority health ministry, 30 Palestinians have been killed by Israeli troops since late March. Some committed violent terror attacks, while others participated in clashes with soldiers, and some appeared to have been unarmed bystanders.