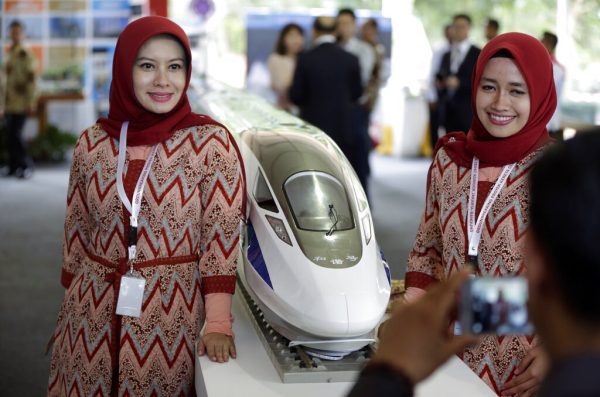 The Chinese-Indonesian consortium building the Jakarta-Bandung High-Speed Rail line says that projected demand has fallen by nearly half.

Indonesian Muslim women pose for a photo near the model of the high-speed train which will connect the capital city of Jakarta to the country’s fourth largest city, Bandung, during the groundbreaking ceremony for the construction of its railway in Cikalong Wetan, West Java, Indonesia, Jan. 21, 2016.

Indonesia’s plan to shift its capital from Jakarta to a remote location on the island of Borneo is set to inflict a further setback on a Chinese government-backed high-speed rail project that has already experienced repeated delays.

According to the head of Kereta Cepat Indonesia China (KCIC), the consortium of Chinese and Indonesian state-owned enterprises that is coordinating the Jakarta-Bandung High-Speed Rail project, it could be 40 years before the rail line begins to turn a profit, around twice the current estimate.

The 142-kilometer rail line is set to link Jakarta to the city of Bandung in West Java, greatly easing congestion along one of the busiest travel corridors in densely-populated Java. But President Joko  “Jokowi” Widodo’s official announcement that he will shift the capital to a purpose built city called Nusantara (“archipelago” in Javanese) in East Kalimantan in 2024, another attempt to ease Java’s world-beating congestion, has weakened the business case for the high-speed rail link.

According to the Jakarta Post, Dwiyana Slamet Riyadi, the president director of KCIC, told a parliamentary hearing on Monday that the projected demand for the railway, based on a recent third-party review, had fallen to just 31,215 passenger trips per day, just over half of the 61,157 estimated in a 2017 feasibility study.

“Looking at the investment value, number of passengers and ticket prices, it’s very difficult to follow the earlier feasibility study where the assumption of a return on investment will occur within 20 years,” Riyadi said, noting that the time taken to reach the break-even point for the project was now projected to take around twice as long.

Riyadi also confirmed earlier reports by the state-owned railway operator Kereta Api Indonesia (KAI), which is part of the KCIC consortium, that the project faces a serious cost overrun, with its total price tag likely to come to $7.9 billion, more than $2 billion more than the $5.5 billion expected  when the project was first agreed in 2015.

Delays and cost overruns have plagued the Jakarta-Bandung High-Speed Rail project since Jokowi awarded the contract to a consortium of Chinese state firms in 2015, over a competing Japanese bid. In October, the Indonesian government announced that it would use the state budget to cover the ballooning costs on the project, prompting calls for the government to renegotiate the project with Chinese leader Xi Jinping. Most of the price changes are due to the rising prices of materials and machinery, COVID-19-induced labor shortages, and delays caused by the complex process of land acquisition along the railway line.

According to KCIC, the control of which is split 60-40 between Indonesian and Chinese state-owned enterprises, the project was nearly 80 percent complete as of the beginning of this year. Reuters reports that KCIC plans to commence a trial run on part of the line by the end of this year and to complete the project by June 2023 – just in time for the tenth anniversary of the BRI.