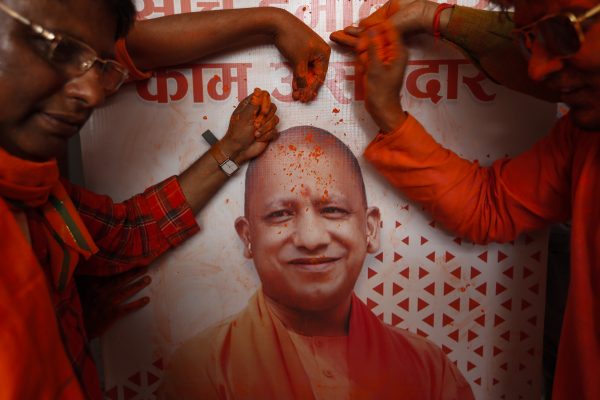 India’s ruling Bharatiya Janata Party (BJP) has successfully overcome anti-incumbency to storm to power in four of five states that voted in state assembly elections recently. The party won an overwhelming majority in India’s most populous state of Uttar Pradesh, where it won 255 out of 403 seats; its Hindutva (Hindu nationalism) appeal swept away burning issues like farmers’ protests, grave mismanagement of the COVID-19 pandemic, unemployment, atrocities against Dalits, and inflation. The BJP also convincingly won the elections in Goa, Uttarakhand, and Manipur.

These state elections also witnessed a major upset in the northern state of Punjab, where a rank outsider, the Aam Aadmi Party (AAP), blew away political heavyweights of both the incumbent Congress and the Akali Dal, a former ally of the BJP.

Having secured such a massive popular mandate in four of five states and especially in the electorally crucial Uttar Pradesh, the Narendra Modi-led BJP has signaled that it is favorably positioned to win the 2024 general elections.

The BJP victory in Uttar Pradesh is being described as “historic,” with the saffron-robed Chief Minister Yogi Adityanath becoming the first chief minister in 36 years to win a second consecutive term.

In his campaign, Adityanath repeatedly warned voters of the “lawlessness” of the challenger, Akhilesh Yadav’s Samjawadi Party (SP), and said that it was only his strong governance that was keeping criminals at bay.

Adityanath had bulldozed the properties of alleged goons in the state; incidentally, the bulldozer became the most visible mascot of the BJP in these elections in Uttar Pradesh. The BJP’s sweeping win in the state has cemented Adityanath’s position in the top ranks of the BJP and decisively silenced his critics.

For the Arvind Kejriwal-led AAP, the victory in Punjab is historic, too. This is the first full-fledged state it will rule; hitherto, the party has been in power only in Delhi. (Law and order in the Indian capital is under the BJP-led central government). The party campaigned on ushering in parivartan (change) from the entrenched corrupt politics of the Congress and the Akalis.

Hailing its victory, Kejriwal said that the people of Punjab had voted for AAP’s Delhi model of “good governance” that prioritizes schools, healthcare, and public welfare. This victory has catapulted the AAP onto the national stage, making it a credible face of opposition politics even as the pan-Indian appeal of the Congress continues to wilt.

Interestingly both landslide victories for AAP – in Delhi earlier and now in Punjab – came after decimating the Congress.

The BJP cruised to victory comfortably in Goa winning 20 out of the 40 seats to attain a simple majority on its own strength. New entrants in Goa like the Trinamool Congress, which is in power in West Bengal under Mamata Banerjee, attempted to increase its nationwide footprint but failed to make its mark or come anywhere close to providing “an alternative to the BJP.”

In his first speech after the BJP’s landslide victories in the assembly elections, Prime Minister Narendra Modi said that it was “nari shakti” (women power) which had delivered the BJP success. “Wherever the women turnout was higher, BJP got a ‘bumper win’,” he said.

Political analysts have highlighted the surprising role played by the “silent women voters” for whom the BJP’s provision of free food rations was the deciding factor. The woman voter, it appears, also bought into the BJP’s narrative that voting in favor of the BJP would keep SP supporters (mainly unruly Yadavs) in check.

Ironically, the state has witnessed a rise in violence, including rapes, against Dalits (former “untouchables”) by powerful Thakur men belonging to the same caste as Adityanath.

Congress’ leader, Priyanka Gandhi, made women’s empowerment the crux of the party’s election campaign and highlighted the horrific gang rapes in Hathras and Unnao, which had caused massive outrage against the Yogi administration’s highhandedness. However, the party managed to secure only two seats, plunging India’s grand old party into existential crisis in the state and raising questions over the Gandhi family’s leadership.

This election has also rung the death knell of the Bahujan Samaj Party (BSP), which had carved its identity as the representative of Dalits. The party’s vote share has shrunk by 9 percent since the last assembly election in 2017. Non-Jatav Dalit votes went to the BJP this time around. Political insiders believe that BSP chief Mayawati, already the target of investigations by central agencies, had worked towards helping to secure a BJP victory. Significantly, the crucial caste factor, which decides the politics of Uttar Pradesh, worked at multiple levels to align caste identity with the BJP’s Hindu nationalism.

What these elections define is that even in the 21st century, when the majority of the people in a state like Uttar Pradesh are impoverished and poor, anger against the atrocities of the ruling government takes a backseat if it doles out free rations to the hungry.

While the BJP did have the edge in Uttar Pradesh, as I previously argued in the The Diplomat, the SP secured 32 percent of the votes, bagging 111 seats to become the principal opposition party in the state. Incidentally, in the 2012 elections the SP swept to power, although it had secured only 30 percent of the vote share then.

Akhilesh Yadav, a former chief minister, put up a spirited and energetic fight against the ruling BJP, even scaring the BJP with his social engineering of castes, rendering the high stakes battle as a “bipolar contest.” The SP began campaigning late and had the party chief got his act together earlier, the final tally might have been different.

Adityanath’s blatant attempts at communal polarization, exhorting Hindus with his 80 versus 20 percent spiel, drove Muslims – they comprise 19 percent of Uttar Pradesh’s population – to supporting the SP.

The March 10 results show that Muslims and Yadavs have indeed propelled the boost in the Samajwadi Party’s tally from 47 seats five years ago to 111 now. However, that alone was not enough to upset the BJP’s apple cart.

The results of the elections in five states has realigned the opposition ranks in the run up to the 2024 general election. AAP has now emerged a strong contender to Banerjee’s claims to lead the opposition in the fight against the BJP, displacing the Congress.

The strong verdict in the BJP’s favor has not only strengthened Modi and his brand of strong leadership, with a win for the party in 2024 being described as a “done deal for the BJP,” but also it has dashed the hopes of India’s fractured opposition being able to rally together to challenge Modi.

Commenting on the election results, academic-turned-political activist Yogendra Yadav, who was an integral part of the farmers’ protests, tweeted, “Election results are disappointing but not surprising. It is a setback for the struggle to save the soul of India. The road to 2024 was always tough, it got tougher today. India will put up a fight. We shall reclaim our republic.”