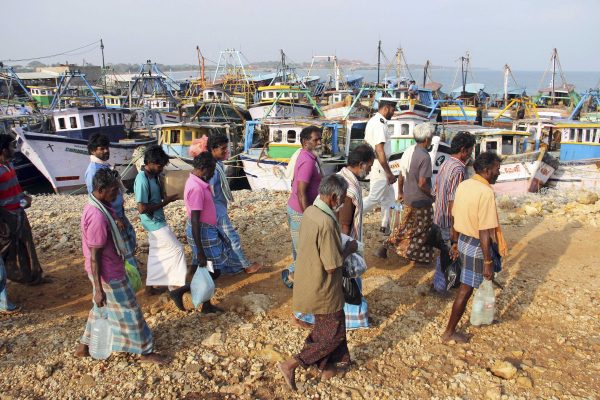 April 2, 2011, is a day etched in the memories of millions of Indians. Under a clear sky, at the Wankhede Stadium in Mumbai, more than 30,000 people screamed Mahendra Singh Dhoni’s name as he hit the winning six, lifting India’s second Cricket World Cup in the process.

As the country erupted in celebration, nearly 1,600 kilometers away, Cinna Thambi’s world came crashing down.

“A bunch of fishers came to me that day, and told me that the Sri Lankan Navy had arrested my younger brother, Victus,” Thambi, who is the Coordinator of the National Traditional Fishermen Federation, told The Diplomat. “Eight days later, on April 10, 2011, his body washed up on the Sri Lankan shores. Following a post-mortem, a doctor confessed to me that my brother had been tortured and murdered.”

Indian and Sri Lankan fishers have historically fished alongside each other in the Palk Strait, a narrow body of water between India and Sri Lanka. While the maritime boundary between the two nations was disputed, an attempt to demarcate it was made between 1974-76, with the signing of four Maritime Boundary Agreements, based on which fishers from both nations could “enjoy in each other’s waters such rights as they have traditionally enjoyed therein.” However, India’s ceding of Kachchateevu Island in the Palk Strait to Sri Lanka complicated this agreement, since the agreement also stipulated that “[e]ach country shall have sovereignty and exclusive jurisdiction and control over the waters, the islands, the continental shelf and the subsoil thereof, falling on its own side of the aforementioned boundary.”

“The decision to give Kachchatheevu to Sri Lanka is viewed as a historical blunder by the fisher community since it reflects a lack of understanding on part of Delhi-based bureaucrats regarding the religious and cultural importance that the island holds in our lives,” Jones Spartegus, a doctoral research scholar from Thoothukudi, said.

Indian fishers, however, had greater access to Sri Lankan waters while the Civil War was raging in Sri Lanka. When the war broke out in the 1980s, the Sri Lankan military banned fishers from venturing out into the sea in the country’s northern provinces, citing security concerns. As a result, many Indian fishers accessed Sri Lankan waters, and this also led to an increase in Indian vessels in the region. When the war ended in 2009, Sri Lankan fishers began demanding their rights to fish in Sri Lanka’s waters. The Sri Lankan Navy also strengthened patrolling off the country’s north coast, fearing a return of militancy. This led to increased confrontations between Sri Lanka’s maritime forces and Indian fishers.

“While patrolling has increased, the Sri Lankan Navy has not been able to prevent Indian fishers from accessing our waters,” explained M.M. Alam, the vice chair of the Northern Province Fisher People’s Union, based in Jaffna, Sri Lanka. “Furthermore, fishers in the North are still reeling from the effects of the Civil War. Prior to the War breaking out, fishers in northern Sri Lanka contributed nearly 40 percent of the country’s catch, but that declined drastically due to the conflict,” Alam added. Sri Lankan fishers have also lamented that they do not have adequate boats, nets, and technology to be able to compete with Indian fishers.

With Sri Lanka’s economy suffering on account of large levels of foreign debt, taking care of daily expenses has become a difficult task for fishers in northern Sri Lanka, many of whom come from the marginalized Tamil community, which was also targeted during the Civil War.

“The government has taken up the construction of fishing harbors in north Sri Lanka, but one can see a number of bottom trawlers in these harbors. Fishers in the north do not have the money to afford trawlers, which shows that the government is encouraging fishers from the south to fish in the north,” Herman Kumara, national convener of the National Fisheries Solidarity Movement, said. “Such discriminatory tactics are further impacting northern fishers economically.”

The economic condition of fishers in India is not much better. Rising fuel prices have pushed up the cost of fishing tremendously, while an increase in sea water temperatures has also adversely impacted fish populations near the coast.

“Ten years ago, the cost of fuel was less and the boats were small, too, since we never needed to venture so far out into the sea. We could easily get a decent catch near the shore. But with the warming of the sea water, the fish have stopped breeding near the shore, which has forced us to venture further out to the sea,” said Dhana Lakshmi, a fisher and member of the Karaikal District Women Federation.

Since fishers need to travel greater distances, they also need to invest in bigger boats. “Earlier, the cost of constructing a boat, along with the nets was 6 million rupees. Now, it is anywhere between 15-18 million rupees,” Lakshmi said. She also explained that with an increase in commercialization of the fishing sector, the nets that fishers use can’t be repaired if they tear. “We could easily repair our old nets earlier, but now we need to buy new ones, which are expensive and further push up costs.”

As fishers in India grapple with increasing expenses, they struggle to break even and earn a livelihood. This is what forces them to take greater risks. “Thomas Jefferson said that with great risks come great rewards. But these days, fishers take such great risks that they end up paying with their lives. All so that they can put food on their tables,” Cinna Thambi said.

Indian fishers have also argued that that government of India has promoted the use of bottom trawlers in order to catch prawns since 1976 and, because of this, traditional fishers cannot be blamed for using the trawlers. Catching prawns is extremely profitable and since most of the catch is exported to countries abroad, it is also an important source of foreign exchange for India.

“The Union Government is keen on ensuring that more and more prawns are fished from the sea, since that yields greater revenue,” Spartegus explained. “Trawlers are expensive, so how can traditional fishers buy a trawler? These are provided by the government through subsidies. On one hand they provide us with the tools and on the other they say we are affecting the marine ecosystem.”

Spartegus further stressed the need for a change in the way the fishers’ crisis in the Palk Strait is viewed. Rather than looking at the issue from a strategic and geopolitical perspective, it is important to look at it from an economic perspective. “Time and again, we hear representatives of both nations say that the rights of their respective countries are being trampled upon. What is happening here is that both countries have rich historical ties, which Tamil fishers on both sides of the border have shared for millennia,” he explained.