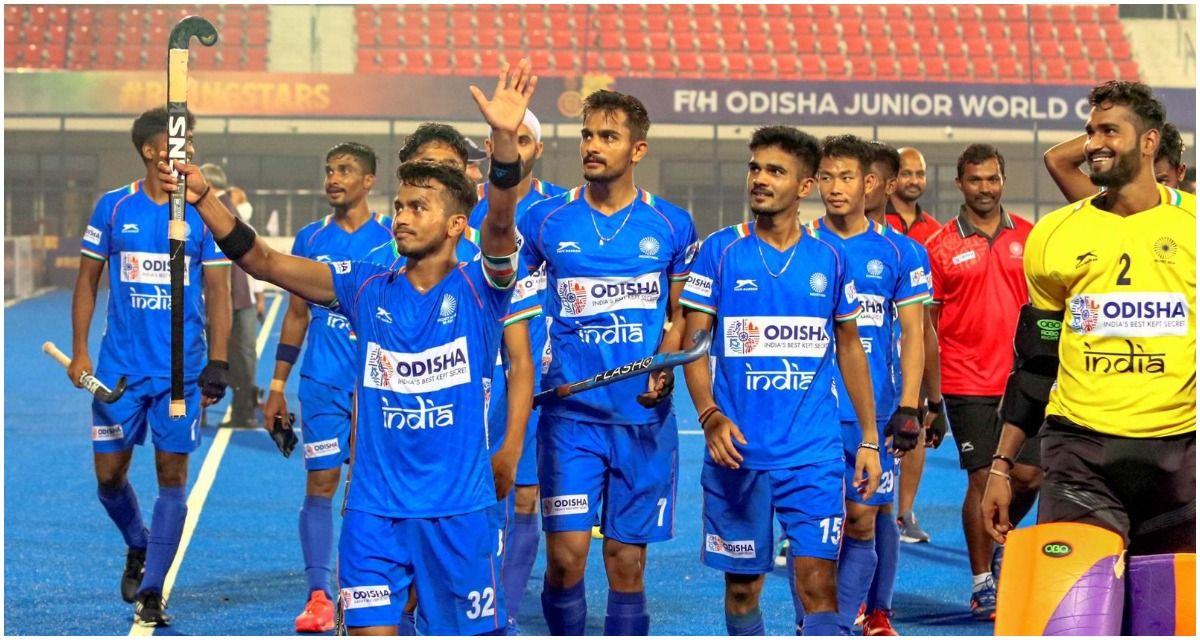 Bhubaneswar, Nov 27: India put up a brilliant performance in the FIH Odisha Hockey Men’s Junior World Cup as the young guns defeated Poland by a massive margin of 8-2 and qualify for the quarter-finals of the Junior World Cup on Saturday.Also Read – PM Kisan Samman Nidhi Yojana: Farmers Must Link Their Account With Aadhaar to Get 10th Installment | Here’s How to do it

With this win, India now face Belgium in the business round of the competition. Also Read – CAT 2021 Today: From Dress Code to Valid Documents, Exam Day Guidelines to Keep in Mind

France, who defeated Canada 11-1 earlier in the day, topped Pool B with an all-win record and will thus take on Malaysia in the other quarter-final. Also Read – Govt Tells Indians Not to Sign Up For Elon Musk’s Starlink Internet. Here’s Why

India and Poland were tied on three points from two matches before the start of the match, both having lost to France. Though India had an edge over Poland because of their superior goal difference, Graham Reid’s boys came up with a fine performance in the first half that did not give Poland many chances. They suffered a few anxious minutes in the fourth quarter but closed the match strongly with two more goals to seal a big win.

Vice-captain Sanjay, forward Araijeet Singh Hundal, and Sudeep Chirmako scored a brace of goals each while forward Uttam Singh and defender Sharda Nand Tiwari contributed a goal each to the score as India wrapped up their preliminary league proceedings with a comfortable win.

Wojciech Rutkowski and Robert Pawlak scored a goal apiece to reduce the margin for Poland, who now take on Chile in the classification matches for ninth to 12th places.

The defeat against France on the opening night of the tournament might come back to haunt India as they face a tougher match against Belgium while France landed themselves an easier path to the semi-finals as they take on Malaysia in the last-eight stage.

Needing only a draw to clinch their place in the quarter-finals, India started well with forward Hundal and Sanjay being thwarted by Poland goalkeeper Maciej Wieczorek. But they could not be denied for long as Sanjay converted a penalty corner in the fourth minute. Hundal was next to get his name on the scoresheet nine minutes later as he converted another penalty corner.

Sundeep Chirmako made it 3-0 when he capitalised on a good run by skipper Vivek Sagar Prasad to tap in a goal from near the six-yard spot in the 24th minute as India went into halftime leading 3-0. They scored three more goals in a productive third quarter with Sudeep, Tiwari, and Uttam Singh scoring to make it 6-0 going into the final quarter.

The Indians went off the boil a bit early in the fourth quarter, happy with the big lead and that allowed Poland to score two goals in quick succession — in the 50th and 54th minute — to make it 6-2.

Just when it looked like the Poles would ride the momentum to cause more damage to the Indian reputation, Sanjay and Hundal scored a field goal each to wrap up the proceedings.

Though it was a big win for India, their performance was as perfect as they would have liked. The Indians were undisciplined on the turf, getting as many as five cards — two green and three yellow which broke their rhythm, and the two cards in quick succession for skipper Vivek Sagar Prasad (46th) and Manjeet (53rd) allowing Poland to score both their goals.

Though they were sharp in attack with 33 circle penetrations, India also allowed Poland a lot of chances and the defense will have to pull up their socks in the quarter-finals against Belgium.