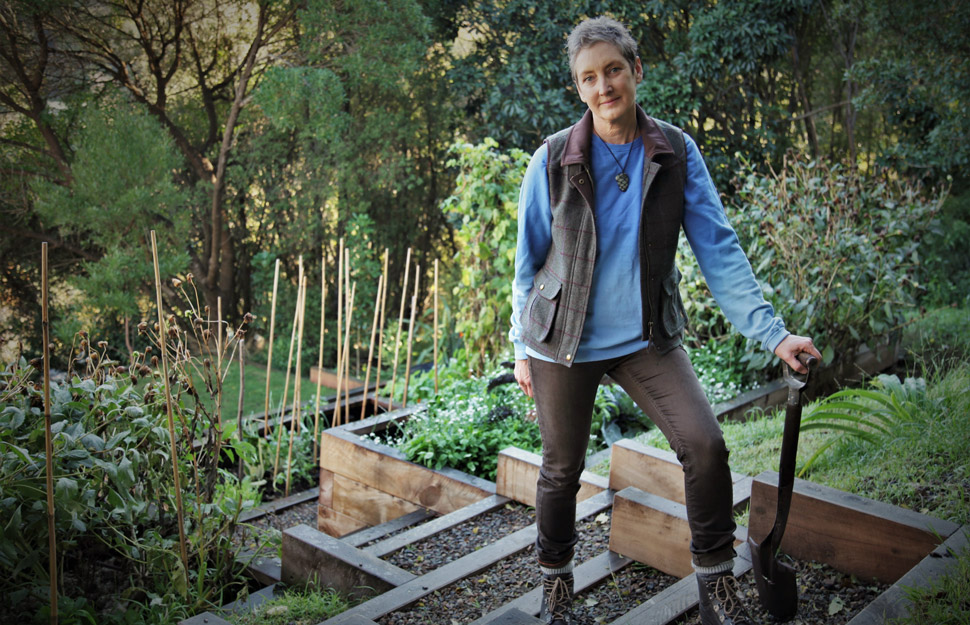 Jane Mahoney in her .4 hectare garden in Corsair Bay.

Realising that gardening can be isolating for some, Jane Mahoney created an Airbnb-inspired platform to connect curious gardeners around New Zealand.

Jane Mahoney has long been happiest with her hands deep in soil, or her nose planted in the head of a flower. “I have vivid childhood memories of exploring gardens, taking in all the smells and watching bugs at grass level. It would usually be while visiting relatives of my mother — there would be five minutes of polite conversation, then I could race out to the garden to play.”

The magic of a garden multiplied as she grew old enough to create her own. Her one-acre (.4 hectare) garden in Corsair Bay, a 10 minute’s drive from Lyttelton, was so overgrown when she arrived seven years ago you could barely see from one end to the other. Now its weeds and sloped hills are tamed, and a permaculture approach (with a mix of natives and exotics) draws in eager kererū and bell birds.

“It was a big undertaking, but hugely satisfying. I’d been thinking for a while it would be great to share my garden and some accumulated knowledge as there’s an aspect to gardening that can be quite isolating,” she says.

For some gardening clears the mind and allows for quiet, however, Jane experiences the opposite. Her head is often flooding with ideas as she plants and prunes. “One morning, while gardening of course, this concept for a business popped into my mind, fully formed. It was time for a new sort of gardening club, something a bit different to the traditional model. Not everyone wants to sit in a hall on a week night and I could see there was a modern way to do it.”

Swapping her trowel for her laptop she typed up a website outline for what’s become Secret Gardens, her full-time business.

Jane was a fan of peering over fences while out strolling to admire others’ gardens, wondering what the property might look like in its entirety. “On my walks around Lyttelton I’d see a house from the road and wish I could have a wander around its garden. I thought if I’m that curious, other people probably are too.”

To test the theory, Jane asked her daughter Sophie to post a survey on their local Canterbury Facebook gardening page. “We asked if people would be interested in a website that allowed you to book to explore other people’s gardens with its creator, in a format similar to Airbnb. There were more than 100 enthusiastic responses in one day, people just really got it.”

Traditional garden tours can be limiting, says Jane. Often they are one-off events, showcase only the most well-groomed gardens in specific seasons at their peak and require bookings well in advance. “You’re usually handed a map and the gardener’s not there, so you can’t pick their brain and ask them what that plant is, or what their secret is to growing it. That conversation is so valuable but can be missing.”

The failures of a garden are as helpful to hear about as much as its triumphs — Jane will be the first to admit her own 16-plant rose garden was devoured by possums. “A garden is such an embodiment of someone’s creativity. It’s the fruit of physical labour, research and a vision – it’s like going to someone’s art exhibition.”

She knew the success of the idea rested on connecting with passionate gardeners. “I did initially sit down and write a list of people I thought I’d contact (a lot I found through flicking through my old copies of NZ Life & Leisure) but amazingly all our gardening hosts we’ve selected have come through Instagram.”

Gardeners caught wind of the project quickly once Jane’s daughter created an Instagram account for her. Her inbox quickly filled up with introductions and photos of gardens across the country. “I’m a complete social media novice, so it has been great having Sophie’s input in the project,” she says.

This small-scale productive garden in suburban Auckland — Ngā Kaupeka — was a blank canvas when owners Phoebe and Dave purchased the property in 2010.

The 750sqm property now has chickens, a beehive and mini orchard.

Organising multiple people came naturally to Jane, who founded Christchurch’s first independent casting agency (Castaway Casting) in 1989, working alongside local and international producers. She also ran a film production company for a decade, producing more than 100 television commercials and photo campaigns in Australasia and Asia. The sporadic nature of the film industry was another catalyst that prompted Jane to create Secret Gardens.

“The Christchurch film industry has seen some real momentum, and I think if it hadn’t have been for the pandemic we would have started to see some results by now. What I’m doing now I could have never predicted, but it feels like a culmination of the skills I’ve acquired along the way,” she says.

The two-hectare garden at Crosshill, near Lake Hāwea, is undergoing a transformation under the guardianship of its new owners Ali and Nic.

Spray has been banned, and the original orchard is being transformed into a five layer permaculture food forest.

Jane’s biggest challenge was believing in her vision for over a year before the website launched (in November 2021). “For any new start-up it’s a risk and it’s nerve-wracking, but you just have to believe in your vision, and your own ability. You also realise all the work you need to do upfront before you can launch something.”

Large-scale formal gardens, compact inner-city sanctuaries and productive kitchen gardens all feature on the site. Hosts range from passionate composters and permaculture enthusiasts, to beekeepers and florists. “It’s been quite interesting to see how many women are at the forefront of these gardens too. I always remember it being my grandfather who ran the veggie garden, and the diagrams in gardening books being men pruning, but the majority of our hosts at the moment are women,” she says.

Hakea, an off-grid, permaculture garden in rural Raglan, is designed to nourish the mind, body and soul of those that live and work there.

The site has been most popular with the 30-45 age group. Jane says this could be attributed to a resurgence in gardening, which has helped people feel connected to the land and each other in a time where the world feels unstable. “We’re finding the hosts too are getting a lot out of it, plenty have been surprised by how much they’ve learnt from their visitors.”

It’s backyard tourism, and the format couldn’t get much more local or authentic, she says. “An hour of connection with a passionate gardener feels like such a treat, and quite reassuring, when the world’s gone a bit crazy. It brings you back to earth.”

From shed to Garden House: This Tasman couple grew an idyllic lifestyle (and their garden-fresh ventures) from ground up

Why growing a food forest can be trickier than you think