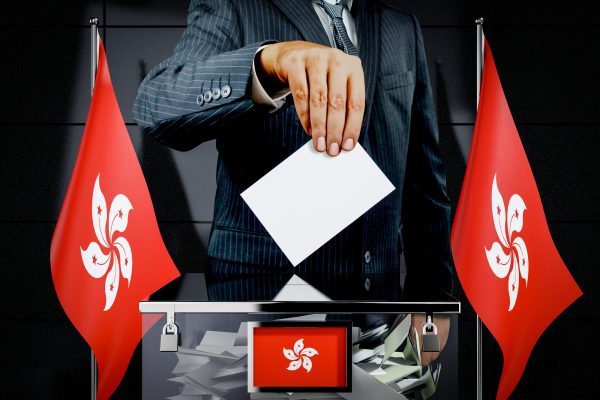 Sunday’s Legislative Council polls are a test of the resistance of pro-democracy Hong Kongers.

Hong Kong is set to have the Legislative Council election this Sunday after a year delay. Compared to the fierce exchanges among voters in previous elections, voters remain largely indifferent toward this one. While public service announcements appealing to people to cast their ballots are found all across the city, public sentiment toward the election is cold as stone.

Earlier this year, the city’s legislature, which is controlled by Beijing-allied lawmakers, passed an electoral reform package imposed by the National People’s Congress (NPC). The package stripped Hong Kongers of their ability to nominate their preferred candidates to stand for Geographical Constituency seats in Legislative Council (LegCo) elections. Candidates are now required to get at least two nominations from the Hong Kong representatives of the NPC or the Chinese People’s Political Consultative Conference (CPPCC), plus be approved by the Eligibility Review Committee chaired by the chief secretary of the government, before running for LegCo seats. Before the reform, a person intending to run for election was only required to get nominations from 100 voters in the same constituency.

Both Beijing and Hong Kong authorities branded such reform as an “improved system,” ensuring the policy of “patriots ruling Hong Kong” can be implemented. Nonetheless, most pro-democracy Hong Kongers see it as a continuous encroachment of the city’s freedoms. Chief Executive Carrie Lam and her cabinet cannot convince Hong Kongers that taking away their right to nominate LegCo candidates is an “improvement.”

With several hundred pro-democracy politicians who played significant roles in the protests in 2019 currently behind the bars or living in exile, there are far fewer candidates who dared to run. Still, several candidates who identify themselves as pro-democracy politicians have passed the government vetting. However, none of them has convinced voters that they remain genuine in their democratic values, and made no deals with NPC or CPPCC members who have nominated them. More broadly, pro-democracy voters also question if gaining seats in the legislature remains a strategic way to advance democracy in Hong Kong. The voice of dissent is predicted to be significantly weaker in the chamber under the new electoral system, and pro-democracy lawmakers will only be considered as a showcase or a “vase,” without actual political influence.

On the other hand, pro-Beijing candidates will enjoy a boost at the ballot box as the government made arrangements to encourage pro-Beijing voters to cast their votes. Polling stations will be set up at the border control points with mainland China for the first time, meaning voters residing in the mainland can vote without being subject to COVID-related inbound travel quarantine. Such an arrangement, which will not allow any independent observers, raised concerns from the public. Candidates with blessings from Beijing can benefit from the mass mobilization of voters in the mainland, which will be unchecked.

The government went even further by amending laws that criminalize advocating for a boycott of the election or encouraging people to cast blank votes. The city’s anti-corruption agency issued arrest warrants for former lawmakers and local councillors living in exile who called for boycotts online. Several Hong Kongers were also arrested for sharing posts produced by these politicians on social media. After rounds of arrests. Hong Kongers have no idea whether expressing their personal wish to return a blank ballot or not vote at all will subject them to jail time or fines. Even the head of the anti-corruption agency could not deliver an accurate interpretation of the new law.

Despite the threat of legal action, the appetite of Hong Kongers to vote in the so-called “improved election” is expectedly low. Over one-third of Hong Kongers have decided not to vote, while another quarter remain undecided. Lam’s cabinet made a last-minute effort to encourage citizens to polling stations on election day, but the harder they push, the more people perceive this election to be rigged in essence.

As casting a ballot would mean endorsing the rigged system, pro-democracy Hong Kongers are encouraging each other to do something else on election day. For instance, netizens are talking about taking advantage of territory-wide free public transportation offers on the same day to go for a staycation, or to vote for their favorite Cantonese song, singer and group in annual awards hosted by a local radio station. Many pro-democracy Hong Kongers are ready to stay away from polling stations as a form of protest.

Although both Beijing and Hong Kong authorities are pushing for higher turnouts in an attempt to demonstrate that it’s business as usual in the city, they cannot admit that their master plan of reprisals against pro-democracy forces have created the embarrassing circumstances of expected low turnouts. The more tricks they take to encourage people to vote, the stronger belief among Hong Kongers that the election is a manipulated one.

This election has become another test of Hong Kongers’ resistance. At a time when most of the pro-democracy political parties, media, and civil society organizations have been forced to disband, the turnout rate and the number of protest votes would be an indicator of the sentiment of Hong Kongers in the leaderless era. We will see if their will to uphold free and democratic values remains as strong as in 2019