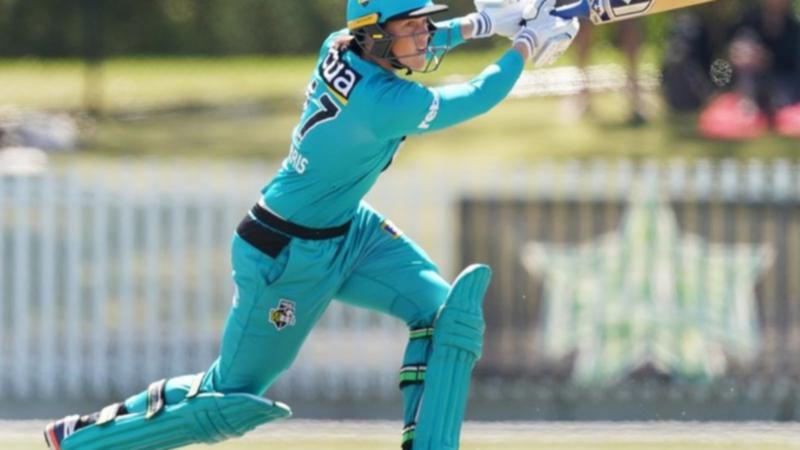 Brisbane Heat moved back above Melbourne Renegades at the summit of the WBBL ladder, after surviving a spirited Hobart Hurricanes run chase to score a 14-run win in the final game of a four-match program.

Renegades had gone top earlier on Saturday after a third straight win, beating the slumping Sydney Sixers by 12 runs at Lilac Hill.

Perth Scorchers’ captain Sophie Devine smashed successive sixes off the first two balls of a WBBL Super over to power her team to victory over Adelaide Strikers at Lilac Hill.

Defending champions Sydney Thunder finally secured their first win of the season after four losses, beating the Melbourne Stars by 19 runs in Launceston.

However, Hobart collapsed, losing 6-16 once Du Preez feathered a ball down the legside to wicketkeeper Redmayne.

Jessica Jonassen (3-25) and Nicola Hancock (3-33) did most of the damage to help Heat to a fourth win, while Hobart suffered a fourth loss.

In Perth, Renegades equalled their highest score of the season, making 7-142, with Jess Duffin hitting a personal-best season high 41 not out off 32 balls and Indian star Harmanpreet Kaur striking 43 off 32.

The Sixers, who have lost three straight, hurt themselves with four run outs and some poor shot selections, finishing on 9-130.

In the late game in Perth, the Scorchers scored 5-121 and Adelaide equalled that total for the loss of eight wickets, after recovering from 7-88 with 23 balls left.

Perth’s South African seamer Marianne Kapp held Adelaide to nine in their Super over and didn’t give up a boundary, while Devine blasted consecutive balls from Megan Schutt over long off and deep midwicket to settle the contest.

It was Perth’s second Super over win of the season and their third overall, while the Strikers have lost successive matches after victories in their first two matches.

In Launceston, Thunder’s biggest partnership of the season, a second wicket stand of 81 between Phoebe Litchfield (49 off 42) and Tahlia Wilson (53 off 53), helped them to 5-133, their equal highest score of the campaign.

Another full round of four games will be played on Sunday, with two matches in Perth and two in Launceston.