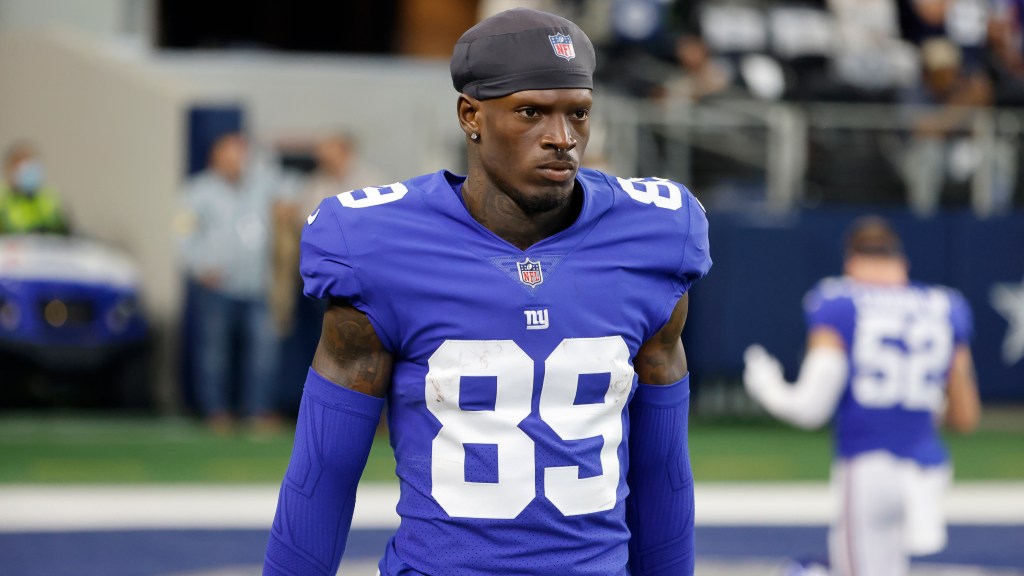 It’s not unusual for rookies to need some time while they acclimate to the faster and more challenging level of play in the NFL.

But just a few weeks into his debut season, New York Giants wide receiver Kadarius Toney already appears to be making a leap. No NFL player has formed more missed tackles (eight) in the past two weeks than Toney, and last week he set a Giants rookie record with 189 receiving yards against the Dallas Cowboys. That eclipsed the previous record of 185, set by none other than Odell Beckham Jr.

Toney, the former Florida Gators star who was drafted No. 20 overall by the Giants this year, is an above-average performer with the ball in his hands. He can juke guys out of their cleats with twitchy lateral cuts and the ability to get upfield extremely quickly.

In the season’s first three weeks, Toney was only on the field for an average of 34% of the Giants’ offensive snaps. But as his playing time increased, he began to impress. Now, injuries to Kenny Golladay and Saquon Barkley will give Toney the chance to play a primary role in Sunday’s game against the Los Angeles Rams — although he will face a difficult assignment playing opposite standout cornerback Jalen Ramsey.

Let’s take a look at the film to examine why Toney is special:

There are three things about this play above that stand out. First, Toney slows down during his break to ensure that quarterback Daniel Jones can see him at the top of his route. Second is the body adjustment at the catch. Third is how he used the momentum from the ball being thrown behind him, then quickly turned toward the defender and juked him.

In Week 4 against the New Orleans Saints, Toney started to put opponents on notice, pulling in six catches for 78 yards. On the play below, he jukes no fewer than six defenders.

Let’s not overlook Toney’s crisp release at the line of scrimmage, either. The press coverage of Saints rookie cornerback Paulson Adebo is no match for him.

Right now, short and intermediate routes seem to be where Toney excels the most, with only has a few defenders remaining in the secondary to beat.

Early in the season, Toney was mostly running jet sweeps, but his usage has been expanded downfield in recent weeks.

Then came last week’s breakout performance against the Cowboys, when he recorded 10 receptions. Not only did Toney make opponents miss in man-to-man defense, but he showed excellent post-catch awareness against the zone. (See below.)

One area of concern for Toney coming into the NFL was his route-running ability and whether he can he clean up his steps against elite corners. However, the clip below shows him beating NFL interceptions leader Trevon Diggs one on one.

Toney’s route running is smooth yet sudden. He shows an ability to get separation at the top of routes and body adjustment at the catch. Importantly, he gets north and south quickly with top-end downhill speed.

“It shows up in terms of the extended runs and breaking tackles, but he has great instincts,” Judge told the media earlier this week. “He has really good vision on the field of seeing where there’s an open space, no matter how small it is. He’s got a very good short-area change of direction and burst coming out of that first step to stop and go very quickly.

“He’s also got that long speed to stretch the field and really separate over space, so he’s obviously a unique player with a very good skill set. Maybe the biggest thing that really helps him, more so than the physical attributes, is how intelligent he is on the field.”

Toney is dangerous no matter where he lines up. In addition to being a threat out wide, Toney can be effective in the backfield receiving the snap as well. Toney was a high school quarterback who attended the Manning Passing Academy, so he has both the ability to throw the ball or tuck it and gain a few extra yards.

Last week, Toney even took a snap and ran a read-option. If his success in multiple areas continues, he could become a candidate for Offensive Rookie of the Year. Sunday’s game against the Rams and his matchup against Ramsey will be a good measuring stick for his progress.