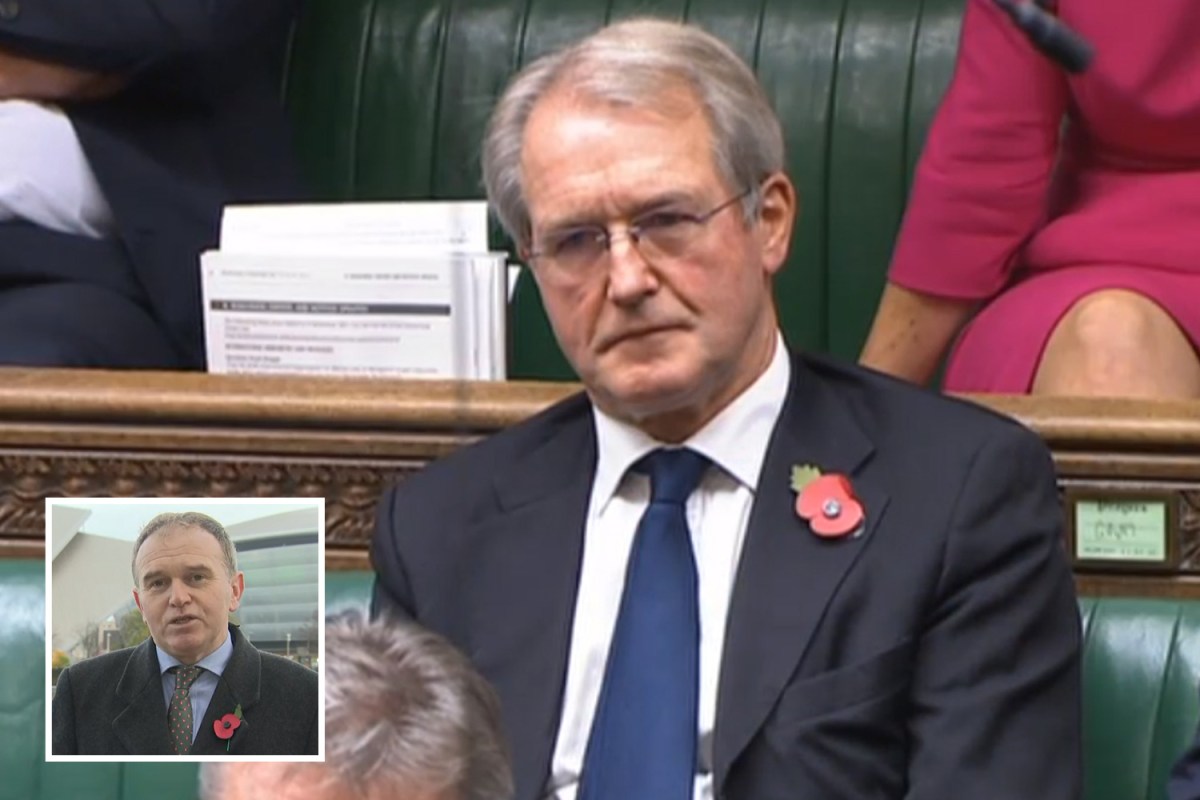 GEORGE Eustice has brushed off the Owen Paterson sleaze scandal as just a “storm in a teacup” after Boris Johnson performed a screeching U-turn.

The Environment Secretary acknowledged that the Government had “made a mistake” when trying to get sleaze-mired Paterson’s breach of lobbying rules re-examined by a new Tory-majority committee.

But, when asked whether he accepted that the Government was in trouble over “sleaze” claims, Mr Eustice told Trevor Phillips on Sky News: “I don’t agree.”

He added: “What we’ve seen is a sort of storm in a teacup if I may say so. Yes we made a mistake in bringing that forward in the way that we did, so we withdrew it.

“But the overall principle, that you should have due process and a right of appeal in these types of situations, I don’t think anybody doubts.”

This week saw despairing Tories left raging at 24 hours of flip-flopping as Mr Johnson’s humiliating bid to save Mr Paterson exploded in his face.

A tidal wave of fury forced the Prime Minister into junking plans to tear up anti-corruption rules to save his pal’s political career.

It meant the former Environment Secretary faced a Commons ban for lobbying ministers and officials for two firms that paid him more than £100,000 a year.

Within hours of the shock announcement on Thursday, Mr Paterson dramatically quit as a Tory MP — claiming that he could not get a fair hearing.

His shock resignation means a byelection will now be fought in the safe Conservative seat of North Shropshire.

He said in a fiery parting shot that the past few days have been “intolerable” for him and his family — and so he had decided to walk.

In a statement he said: “I have today, after consultation with my family, and with much sadness decided to resign as the MP for North Shropshire.

“The last two years have been an indescribable nightmare for my family and me.

“My integrity, which I hold very dear, has been repeatedly and publicly questioned.

“I maintain that I am totally innocent of what I have been accused of and I acted at all times in the interests of public health and safety.”

The chaos infuriated his own party with one MP branding the saga a “total s*** show” that left the Conservatives “looking like idiots”.

They added: “We look like pigs with our snouts in the trough.”

And a senior minister fumed: “All of this pushes the sleaze button. We have been getting a ton of angry emails. It all just looks like we’re back to the 1990s — MPs getting together to support their friends.”

The astonishing goings-on had seen Boris on Wednesday wield his huge majority to ditch Parliament’s anti-sleaze rules and secure a temporary reprieve for Mr Paterson.

The Tory MP for North Shropshire had faced being kicked out of Parliament for 30 sitting days and having to fight a by-election after being found guilty of lobbying ministers.

Boris had tried to ram through plans to throw out the rules and create an appeals panel dominated by Tories.

But the hugely controversial move, which overturned the findings of anti-corruption tsar Kathryn Stone, sparked a massive backlash — spooking the PM.

Amid a flood of accusations that the Tories were “wallowing in sleaze”, Business Secretary Kwasi Kwarteng pulled the short straw and was sent to defend the plan.

He said Mr Paterson had been the “victim” and suggested Ms Stone should quit as politicians were “overturning” the process.

But while he was defending the move, Mr Johnson was already thrashing out plans for his U-turn.

The PM was shocked at the sheer scale of the backlash and furious at Mr Paterson’s lack of contrition.

Just after 10.30am, Cabinet Minister Jacob Rees-Mogg told MPs in the Commons that the Government would drop its proposal.

He admitted the attempt to rip up the regulations would flop after Labour and the SNP had promised to boycott the new body.

Instead, he said No 10 would seek cross-party talks while Mr Paterson’s case and punishment would go back to the Commons for another vote.