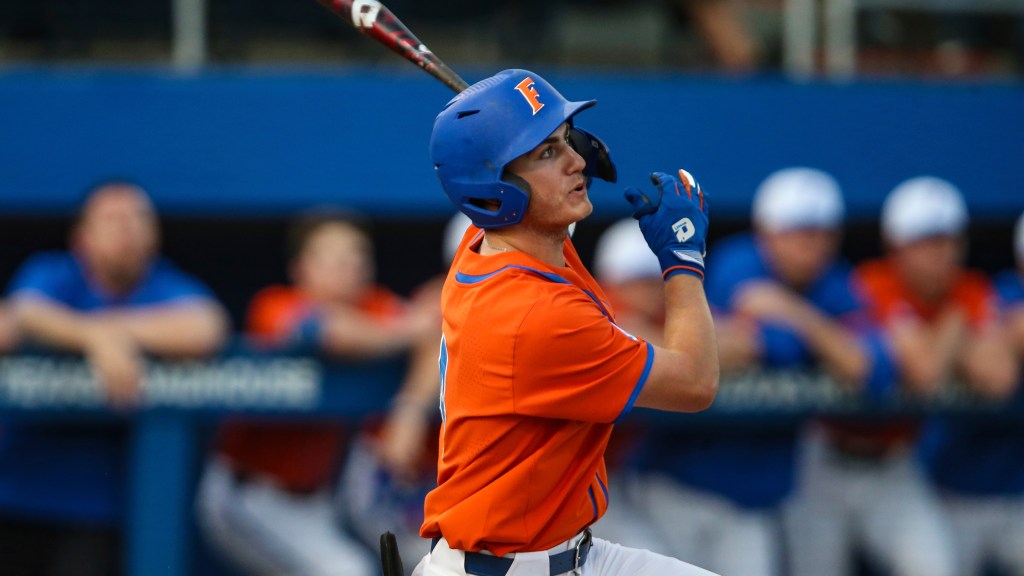 It has been a disappointing season for Florida baseball as the schedule winds down into the final weeks, with the Gators severely underperforming their projections due to a dearth of reliable pitching and some untimely cold streaks by the bats. With just 12 games remaining until the start of the Southeastern Conference Tournament, UF is in dire need of a jumpstart if the Orange and Blue has any hopes of making the postseason.

On Tuesday night, Florida got that jolt of power from its bats against the South Florida Bulls in an 18-3 victory at Condron Family Ballpark to avenge a shocking loss in the opening round of the regionals last year. Nick Pogue got the start on the bump and looked strong despite a few blemishes, tossing four innings of two-run ball while the bats caught fire.

The Bulls struck in the top of the first with a solitary run but the Gators began to show their fury in the bottom half of the frame, with Jud Fabian launching a two-run home run to make it a 2-1 score. After a scoreless top of the second, Florida unleashed the beast with a trio of home runs — a solo shot by Mac Guscette, then a grand slam for Fabian immediately followed by a back-to-back knock by BT Riopelle to push the lead to 8-1.

USF plated a run thanks to a throwing error attempting to gun down the leadoff hitter, who made it across on a sac fly to add to the 8-2 score. But the Gators were not complacent with a six-run lead and pushed across a pair of runs on a Wyatt Langford double and a Sterlin Thompson sac fly to make it a 10-2 game.

Pogue clicked on cruise control for the next couple of innings while the Gators added a six-spot on a Guscette fielder’s choice, followed by a bases-loaded bloop single by Thompson with two outs, and then Fabian’s third dinger of the day immediately following in the fourth that launched the score to a 16-2 blowout. His three homers and eight RBI were already career highs for the elder Fabian before the game was even halfway over.

Tyler Nesbitt took over in the fifth along with a few other fielding adjustments and shut down USF in order, and the Gators did the same in the bottom half of the frame. Florida tacked on another in the bottom of the sixth on a sac fly that followed Kris Armstrong’s triple and nearly padded the lead even more but failed to capitalize further for a 17-2 tally.

Karl Hartman took over in the seventh, and after striking out the first batter on a full count, hit the next one followed by a base-on-balls but escaped damage thanks to a strikeout and a fielder’s choice to close out the inning. The Gators made some noise in the bottom half but failed to score. Anthony Ursitti came in for the eighth and gave up a run after surrendering a leadoff single along with a walk followed by another single and a fielder’s choice to make it a 17-3 game.

Florida scored its 18th run — more than any other game this season — on a Ty Evans solo home run and threatened to score more before going down in the bottom of the eighth. Ursitti came back out to close things out, retiring the first two batters he face before an error by Josh Rivera unmercifully prolonged the inevitable. A wild pitch and a walk strung things along further before a strikeout finally clinched the game.

The Gators hit the road this weekend for a weekend series against the Mississippi State Bulldogs starting on Friday at 8 p.m. EDT. The game will be broadcast on the SEC Network and can be heard on ESPN 98.1FM/850AM WRUF.