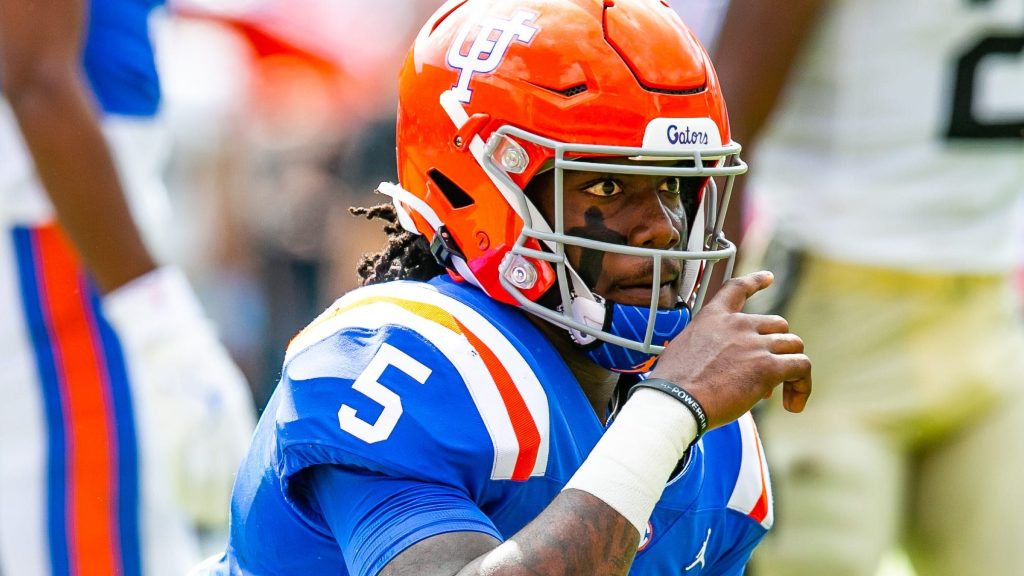 Wednesday was one heck of a day for the Florida Gators’ football team. On the first day of the early signing period, the team managed to land three priority recruits in the 11th hour — safeties Kamari Wilson and Devin Moore and linebacker Shemar James. In the commotion, a piece of news was dropped that would have been the banner story of any other day.

Quarterback Emory Jones, who started the majority of Florida’s game during the 2021 season, announced his intention to enter the transfer portal.

Jones was a high-end recruit who committed to the Gators as part of Dan Mullen’s first recruiting class. In an unexpected twist, Kyle Trask leapfrogged in front of him and took firm hold of the starting job, unseating Feleipe Franks and landing in Tampa Bay after a triumphant college career. Nonetheless, Jones stuck it out and waited for his turn as the next man up.

By the time Jones finally got his chance, it was as a part of a doomed team that played so poorly it got Mullen fired and landed the Gators near the bottom of the SEC. He was often thoroughly outplayed by his backup, Anthony Richardson, and the only reason he was able to reclaim the starting job was because of Richardson’s nagging leg injuries.

It’s hard to place too much blame on Jones for how the Gators’ season unfolded. The coaching situation and scheming he was surrounded with were beyond abysmal by season’s end. He finished the season with 2,563 passing yards, averaging 8.3 yards and completing 67.3% of his attempts. However, he often failed to live up to his promise as a top-100 recruit and will enter the portal as a far less valuable asset than one would have imagined in 2018 when he was recruited.

Jones plans to play in Florida’s bowl game vs UCF on the 23rd. He’s willing to go anywhere in the country and is looking for “a place that develops me and prepares me for the next level.”

With the departure of Jones, the Gators’ offense is squarely in the hands of redshirt sophomore Anthony Richardson for the 2022 season. Richardson demonstrated explosive playmaking and rare athletic ability during his limited exposure in 2021, but he clearly needed more experience to be a consistent weapon in the SEC. He recently underwent surgery to take care of his persistent leg injury, but if he isn’t able to stay healthy in 2022, it could be a problem in light of Florida’s scant depth at the position.

Due to Billy Napier’s ascendancy to the head coaching position and Richardson’s likely claim to the starting quarterback job, it’s not too surprising that Jones would turn to the transfer portal. Tons of schools have open quarterbacking jobs thanks to the immediate transfer rule that has brought the portal buzzing to life.

Jones has a good chance to settle into a comfortable starting job somewhere with less chaotic circumstances than what he faced at Florida. He has two years of eligibility remaining and still has plenty of time to revitalize his career.

Speculatively, one destination that makes sense for Jones is Virginia Tech. The Hokies made an effort to be a player in his recruitment, but didn’t stand much of a chance against the SEC heavy-hitters who were also vying for his attention. They managed a 6-6 record in 2021 despite a terrible season from quarterback Braxton Burmeister and could likely perform much better with a more talented passer under center.

Virginia Tech still employs quarterbacks coach Brad Cornelson, the recruiter who led the Hokies’ recruitment effort of Jones years ago. It’s easy to envision them making another effort to bring Jones to the ACC now that he is available again.

It’s easy to feel that Jones’ departure is a hard-hitting reminder of the deeply unsatisfying way Dan Mullen’s reign over the Florida football team ended. Being a priority recruit at a flashy position who was labeled ‘the future’ for years on end, Jones’ Gators career was inevitably linked to Mullen’s.

Maybe I’m a bit softhearted, but in a way, I can’t help but feel a little bit bad for him. This is surely not what he had in mind when he signed on to play in The Swamp.

No matter what the future holds for Jones, we here at Gators Wire wish him only the best going forward.