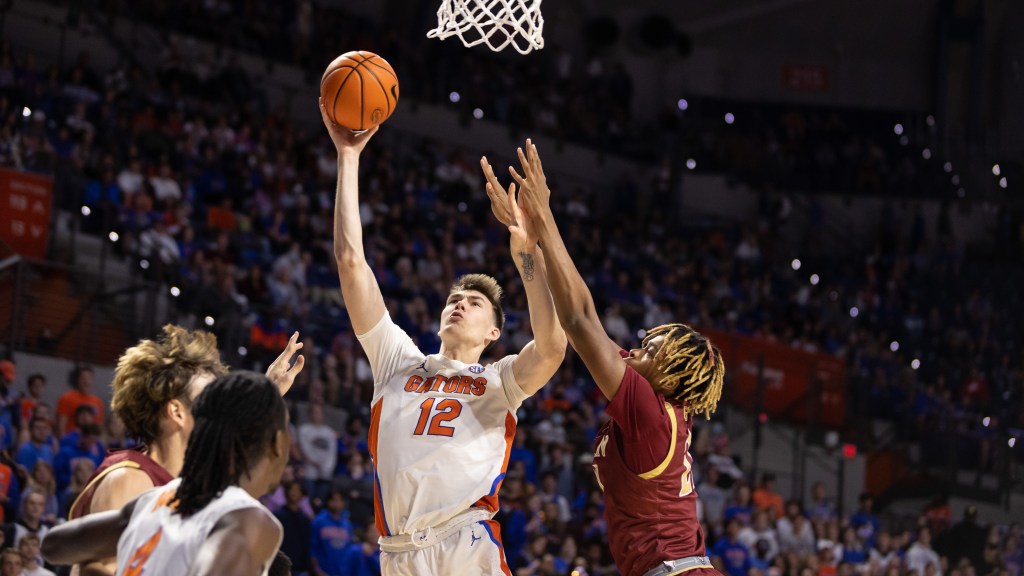 Florida opened its 2021-22 men’s basketball season with a 74-61 win over Towson. Though that score may look a bit close, the Gators controlled the game throughout and led by as much as 28 in the second half. The defense looked as good as advertised, and big offensive games from Colin Castleton and Myreon Jones, who each notched 18 points, should be encouraging.

The Gators face their first real test on Sunday when No. 19 (Coaches Poll) Florida State comes to town, and UF will look to earn its first win in that series under coach Mike White (the last win came in 2013).

As we saw on Tuesday night, this is a team comprised of a lot of newcomers, and while White had a talented haul in the transfer portal, it may take some time for those pieces to gel together. Likely for that reason, Florida enters the year with considerably less hype than in prior seasons.

In the preseason bracket projection for the NCAA Tournament from Sports Illustrated’s Kevin Sweeney, the Gators sit as a No. 10 seed in the South Region drawing seven-seeded Texas Tech in the first round. A victory in that game would set up a likely matchup with two-seeded Purdue, and the top seed in the region is Texas.

Other SEC teams predicted to make the field are three-seeded Kentucky, four-seeded Alabama, five-seeded Arkansas, five-seeded Tennessee, seven-seeded Auburn, 11-seeded LSU and 12-seeded Mississippi State, who is projected among the Last Four In and would take on Oklahoma in a play-in game, per the projection.

It’s going to be a tough year in the SEC, and making the tournament won’t be a breeze for this team. But the Gators have talent, and that is why they’re predicted to make it to the postseason, albeit as a fringe team at the moment.