France has given a chilling warning that the “worst is yet to come” for Ukraine, following talks between Russian President Vladimir Putin and his French counterpart Emmanuel Macron.

Following a 90-minute phone call on Thursday between Mr Putin and Mr Macron, an Elysee source told reporters that Mr Putin had said he intended to continue his military operation.

“Without making a prediction, we should expect the worst is yet to come. The (French) President said so yesterday as well. There is nothing in what Putin said today that should reassure us,” the source said.

Mr Putin told Mr Macron he was available for negotiations but emphasised that discussion must take place on the grounds of neutralisation and disarmament of Ukraine, the source said.

The French president said he will continue the dialogue to prevent “more human tragedy”.

“We must prevent the worst from happening.

“Dialogue has to continue to “protect the (civilian) population, to obtain good will gestures … to put an end to this war,” Macron said.

The Russian leader also said that if Kyiv wanted to talk, it must act now – and if Ukrainians don’t accept these conditions, he will obtain the same result by the military path, the source said. Mr Putin denied having bombarded Kyiv and warned that the situation would worsen, but that it was the fault of Ukraine, the source said.

France estimates that Russia’s military ambition is to take all of Ukraine, the source added.

Mr Putin claimed the war in Ukraine is “going according to plan”, with residents of the key city of Mariupol facing a deteriorating humanitarian situation, as the city remains under siege by Russian forces determined to tighten their grip on Ukraine’s south.

“The special military operation in Ukraine is going according to plan, in strict accordance with the schedule,” Mr Putin said in his Security Council broadcast on state television, using the euphemism the Kremlin uses to describe the invasion of Ukraine. “All tasks are being successfully being carried out.”

His remarks came as civilians in Mariupol were trapped without power, heating or water. 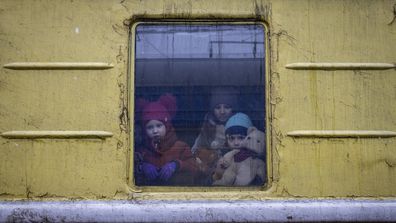 We may be witnessing ‘the biggest refugee crisis this century’

Mariupol authorities warned of a “critical” situation for residents amid heavy shelling. It’s not clear how many of Mariupol’s roughly 400,000 inhabitants have been able to evacuate the strategically important port city or how many have been killed or injured.