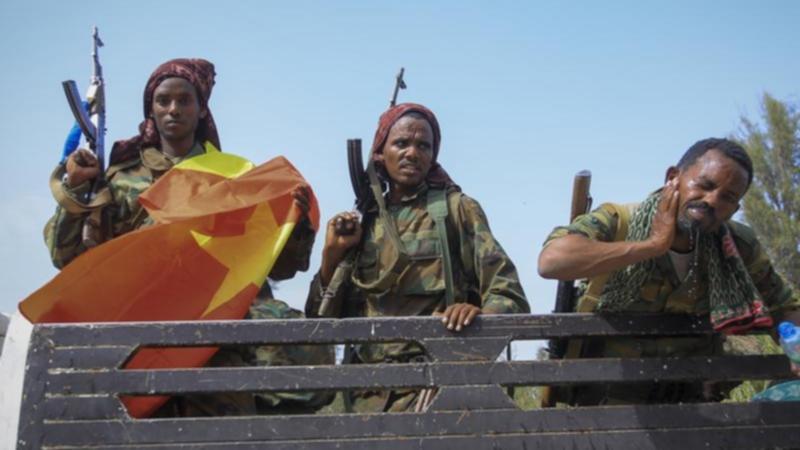 Two different groups fighting Ethiopia’s central government say they have seized control of towns as the prime minister appeals for citizens to take up arms.

The spreading conflict threatens to further destabilise Africa’s second most populous nation, once considered a stable Western ally in a volatile region.

Prime Minister Abiy Ahmed urged citizens to join the fight against the Tigray People’s Liberation Front (TPLF), the party in control of the rebellious northern region of Tigray, after Tigrayan forces said they took another town on a highway linking the capital of the landlocked nation to the port of Djibouti.

“Our people should march … with any weapon and resources they have to defend, repulse and bury the terrorist TPLF,” Abiy said in a Facebook post on Sunday night.

TPLF spokesperson Getachew Reda said Tigrayan forces have seized the town of Kombolcha and its airport in the Amhara region.

On Sunday night, insurgents from Oromiya, Ethiopia’s most populous region, said they had seized the town of Kemise, about 50 kilometres south of Kombolcha on the same highway to the capital, Addis Ababa.

Odaa Tarbii, a spokesperson for the Oromo Liberation Army (OLA), said the group had taken Kemise, about 300km from Addis Ababa, and were engaging government forces.

The OLA is an outlawed splinter group of the Oromo Liberation Front, a formerly banned opposition group that returned from exile after Abiy took office in 2018.

The Oromo are Ethiopia’s largest ethnic group; many of their political leaders have been imprisoned under Abiy’s government.

In August the OLA and the TPLF announced a military alliance, heaping pressure on the central government.

War broke nearly a year ago between federal troops and the TPLF, which dominated Ethiopian politics for nearly three decades before Prime Minister Abiy Ahmed was appointed in 2018.

The conflict has killed thousands of civilians and forced more than two million people to flee their homes.

Tigrayan forces were initially beaten back but recaptured most of Tigray in July. They then pushed into the neighbouring Amhara and Afar regions.

Tigrayan forces say they will keep fighting until Amhara forces leave the heavily fortified area of Western Tigray, and until the government permits the free movement of aid into the rest of Tigray.