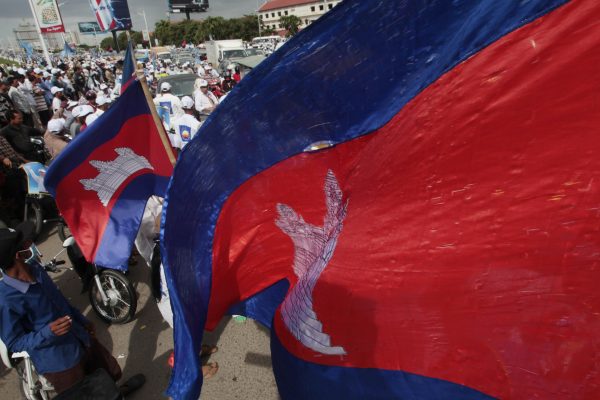 Cambodian National flags flutter over supporters of the opposition Cambodia National Rescue Party (CNRP) during the last day of campaigning ahead of communal elections, in Phnom Penh, Cambodia, Friday, June 2, 2017.

Cambodia faces new local and national elections in June 2022 and July 2023 as a single-party state.

These elections will be an empty gesture, as in the national elections of 2018, unless leaders of the only real opposition party, the Cambodia National Rescue Party (CNRP), are allowed to return to the country.

I challenge Prime Minister Hun Sen to lift his official ban on airlines transporting me to Cambodia, and withdraw his request to Thailand to prevent my entry there. If he is willing to allow me to enter Cambodia and to let opposition supporters greet me as they did when I ended my previous exile on July 19, 2013, then I am willing to come and be arrested, and face jail.

Some journalists have incorrectly reported that I am in “self-imposed exile.” The term means simply choosing not to live in one’s country of origin. This is plainly not my case.

My last attempt to return to Cambodia on November 9, 2019, was blocked because the Hun Sen government banned any airline from carrying me. I couldn’t enter Cambodia by land from Thailand either because Thai Prime Minister Prayut Chan-o-cha publicly declared – probably on Hun Sen’s request – that he would not allow me to do so. Supporters who openly planned to greet my arrival in Cambodia were arrested or intimidated and forced to go into hiding. Thousands of policemen and soldiers were mobilized to “strengthen security” around Phnom Penh Airport and to prevent any unwanted entry at border checkpoints. Hun Sen told soldiers along the border to dig “trenches” and position “machine guns” to repel any unwanted visitor.

My exile is the choice of the Cambodian government and no one else.

The fact that Hun Sen wants to prevent my return at all costs shows a paranoia that leads to perplexing contradictions. He has had me convicted by a politically subservient court to serve long prison sentences and has issued numerous warrants to arrest me. But when I get ready to come back to face arrest, he does everything he can to prevent my return.

I was forced out of the country in the first place. I had returned to Cambodia in July 2013 ahead of national elections in which the Cambodia National Rescue Party scored 45 percent of the vote. This was despite the fact that the National Election Committee (NEC) remained clearly under the control of the ruling party, and independent election observers raised questions as to the validity of the result.

On November 16, 2015, I was on a long-planned trip to South Korea when my mandate as a deputy was revoked and an arrest warrant issued against me, in breach of the constitution. This was clearly designed to prevent me from re-entering Cambodia. Exiling me was part of the government’s unsuccessful strategy to divide the CNRP, which it has pursued virtually since the day the party was established by a merger between the old Sam Rainsy Party and the Human Rights Party led by Kem Sokha. While I am prevented from coming back to Cambodia, Kem Sokha is prevented from leaving the country, besides being banned from politics.

Other CNRP leaders, such as party vice-president Mu Sochua, have also been forced into exile. Mu Sochua also tried but was prevented from returning to Cambodia in November 2019.

I am ready to return if the government ends my forced exile at any time.

Kem Sokha took over as leader of the CNRP when I stood down in 2017 in an unsuccessful attempt to prevent the party from being dissolved by order of the government-controlled Supreme Court. Since then, Kem Sokha has been imprisoned, then held under house arrest, and is now subject to a trial which has been indefinitely postponed on the spurious charge of treason. Kem Sokha’s trial has been constantly postponed under the pretext of COVID-19. But the pandemic has done nothing to stop many other trials against dissenting voices from going ahead, leading to convictions with severe punishments.

No evidence in support of the charge against Kem Sokha has ever been produced. The charge has failed in its main political purpose of dividing the CNRP leadership. Its only use now is to provide a legal fig-leaf for maintaining the CNRP’s dissolution.

Banning the party was part of a much wider crackdown on the free press, which no longer exists in Cambodia, as well as civil society and defenders of human rights and the environment. In October, Hun Sen ordered the arrest of an exile in Thailand for writing a poem that criticized the regime. This month, the autistic teenage son of a detained CNRP activist was convicted and jailed simply for criticizing the regime online.

There is deep irony in the fact that Cambodia has now taken over the chairmanship of the Association of Southeast Asian Nations (ASEAN). This places Hun Sen in a position of responsibility in the organization’s dealings with the military junta in Myanmar. In a welcome sign of progress, ASEAN excluded junta chief Min Aung Hlaing from a summit in October.

Hun Sen, however, is likely to try to use the atrocities in Myanmar to deflect attention from his own appalling human rights record. The fact is that the junta has followed Hu Sen’s playbook by disregarding the will of the people, putting Aung San Suu Kyi on trial without evidence, and planning a bogus election without real opposition. The only real difference is that Cambodia has seen a constitutional coup while Myanmar has had a military coup.

Empty words and gestures on Myanmar from Hun Sen must not be allowed to deflect attention from the ongoing repression in Cambodia. Allowing him to deal with Myanmar is like putting a poacher in charge of guarding the farm animals. It might work in the case of a poacher who has changed his ways. So far, there is no sign that Hun Sen has.