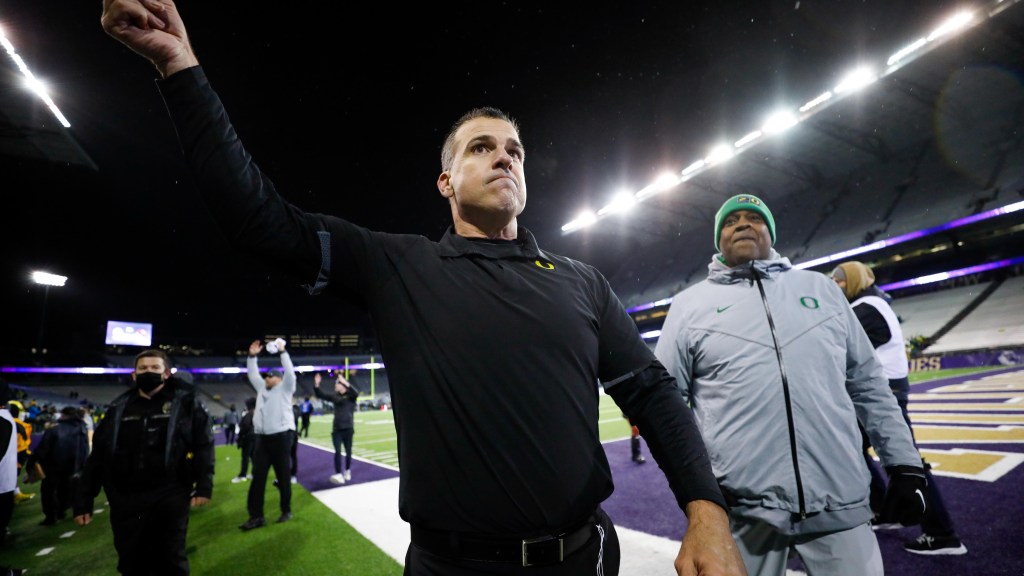 On Sunday, Florida officially made the decision to do what many fans have been hoping to see for the last few weeks as it chose to fire fourth-year coach Dan Mullen after a one-point overtime loss against the Missouri Tigers.

It was a shockingly rapid fall from grace. Before the three-game losing streak to end the 2020 season, Mullen was 29-6 at Florida and considered one of the fastest-rising names in the sport. But the sour conclusion to last year’s campaign signaled a decline that would continue this season.

Mullen made the decision to keep defensive coordinator Todd Grantham, which frustrated many fans, and recruiting issues that had been manageable up until this season started to manifest as noticeable talent deficiencies this season.

The Gators are now on their fourth coaching search in the last 10 years, and it’s crucial that they get this one right. At his press conference on Sunday, athletic director Scott Stricklin said that the school is looking for a coach who can sustain consistent competitiveness. That translates to elite recruiting, which is necessary to keep up with Georgia and Alabama in the conference.

Here are some of the potential candidates Florida could target to replace Mullen. Some are more realistic than others, but all are names that will likely be connected with this job, to varying degrees.

If Florida wants to make a splash hire, Cristobal is the one it has to be. The 51-year-old was promoted from his role as Oregon’s co-offensive coordinator to head coach after Willie Taggart left for Florida State following the 2017 season, and he’s quickly built what is the best program in the Pac-12 at the moment.

A Miami native who also previously served as an assistant and recruiting coordinator under Nick Saban, Cristobal is an elite recruiter and he knows the area. He has a 34-12 record at Oregon, and he may be happy where he is. But there are built-in disadvantages to coaching in the Pac-12, such as the lack of distribution for its television network, and the league’s philosophy doesn’t always jibe with the Ducks’ blue-blood aspirations.

Oregon’s already seen one coach leave for a Power Five program in Florida. The Gators should at least make the call to see if Cristobal is pleased with his current situation.

Prepare to hear Napier’s name a lot in the coming weeks. There’s a lot to like about the 41-year-old coach, who has built Louisiana into a Group of Five power. He’s 38-12 and has won at least 10 games in each of the last three seasons. A former assistant under Nick Saban and Dabo Swinney, he’s had the opportunity to learn from two of the greats.

Napier seems to understand what it takes to win in the SEC, as he’s tried to model his program in Lafayette after Saban’s. He has one of the largest staffs in the Sun Belt, and he’s signed the top class in the league the last two seasons (and is about to sign his third).

He has been connected with openings at Ole Miss, Arkansas, Tennessee, Mississippi State, Auburn and South Carolina, but he’s been waiting for the right opportunity that can provide him with the resources he needs to succeed. It’s unlikely he says no to Florida if the job is offered, and the search could very quickly center around Napier, especially if none of the top names are interested.

Kiffin is certainly a polarizing coach, but it’s undeniable that the man can coach offense. He’s developed Ole Miss very rapidly into one of the best offensive teams in the nation, and he would certainly bring a lot of excitement to the program.

There are also rumors that Kiffin is interested in leaving Oxford, and his name has been connected to the openings at Florida and LSU, as well as the Miami job, which is not open at this moment.

There are concerns with Kiffin, though. Despite having a team that currently ranks in the top 10, his 2022 recruiting class is currently on the sixth-best in the SEC and doesn’t crack the top 15 nationally. Does Florida take a chance on that recruiting ability for another offensive schemer from a Mississippi school?

Many people questioned Aranda’s acumen as a head coach after going 2-7 in his first season in Waco in 2020. But after a 9-2 start in 2021 that featured an upset win over Oklahoma, Aranda is quickly earning a reputation as an intensely smart football coach.

He’s crossed the entire nation during his coaching career, and he’s proven he can win regardless of locale. He was successful in the midwest as the defensive coordinator at Wisconsin, in the south, where he won a national title in the same role at LSU, and now in Texas at arguably the toughest Power Five job in the state.

Aranda is likely among the top targets for the openings at USC and LSU, but he will probably be on Florida’s shortlist, as well.

There’s no denying Fickell’s body of work. He’s 46-14 at Cincinnati, and since a 4-8 finish in Year 1 back in 2017, the Bearcats have won 11 games in each year except for a shortened 2020 season in which they still went 9-1. There’s a reason he’s been considered one of the hottest commodities this coaching cycle.

But there are also concerns when it comes to Fickell. He’s never coached outside the state of Ohio, and even if he decided to leave his home state now, coaching for the athletic director who initially hired him at Cincinnati, Mike Bohn (who now holds the same role at USC) may be a more attractive option.

And that’s if he even wants to leave. His current team may be on pace to make the College Football Playoff, and while Cincy is currently relegated to the Group of Five, that is set to change as the team will join the Big 12 at some undisclosed point in the near future.

Franklin has an impressive resume as a head coach. Though his 67-32 record at Penn State isn’t overly impressive, his tenure in State College has featured three 11 win seasons and a Big Ten title in 2016. Before that, He won nine games at Vanderbilt back-to-back years in 2012 and 2013. But he’s only 11-9 in his last 20 games, his recruiting has just been alright, and he, like Mullen, has a bit of an eccentric personality. Also, there are rumblings Franklin is about to receive an extension at PSU. And by “rumblings” I mean he may have literally accidentally announced it at a speaking engagement. I expect Florida to go in a different direction.

Entering the season, Campbell was considered one of the coaches most likely to take a better job. However, as Iowa State sits at 6-5 on the season, he’s likely lost a bit of his luster as a candidate. Still, Campbell’s name garners a lot of respect in coaching circles, and he’s won consistently at what is probably the toughest Big 12 job outside of Lawrence, Kansas. But, like Fickell, his entire coaching tenure has been within the midwest, and it’s fair to question whether he could succeed in SEC country.

If you’ve ever looked at Florida’s mesh option and thought, “This would be better if it were slower,” then do I have the coach for you. In all seriousness, Clawson’s success at one of the hardest jobs in the Power Five has been one of the most impressive coaching jobs in college football in recent years. His 2021 campaign, in which the Demon Deacons sit at 9-2, has been his best. He’s an innovative offensive mind, but would he have interest in leaving a job with almost non-existent expectations for a position as stressful as being the head coach at Florida?

Photo by Bryan Terry, The Oklahoman

Let’s get weird. Yeah, I get it. Stoops has been out of the game since 2016, aside from a brief stint in charge of the XFL’s Dallas Renegades before the league folded in 2020. Could that foray back into coaching indicate that the 61-year-old still has something left in the tank? If Florida wants to make a home-run, proven hire, it may need to call Stoops just to gauge his interest.

He won a national title at Oklahoma way back in his second season in 2000, but he was very consistent after that and finished with a 190-48 record. A former defensive coordinator at Florida for the national title team in 1996, Stoops would have the chance to reunite with his longtime friend in Steve Spurrier.

If the elder Stoops isn’t interested, why not look at his younger brother? Mark Stoops has already solidified himself as perhaps the best coach in Kentucky history, and he engineered the school’s first two wins against Florida since 1986. But Stoops would be similar to the Dan Mullen hire in the sense that you would be banking on the fact that he could land top talent at a more premier SEC job (his 2022 class currently ranks 12th in the SEC). The question for Stoops is the same one that surrounds Clawson: Would he leave what is one of the most stable situations in college football for a job with the pressures of Florida?

Nationally, Quinn is best known for his stint as the head coach of the Atlanta Falcons, where he lost Super Bowl LI in the “28-3” game. But before that, he led the best defense in the NFL with the Seahawks in 2013 and 2014, winning a championship in his first season, and he got that job after a very successful stint as Florida’s defensive coordinator under Will Muschamp.

Things dropped off for Quinn in Atlanta after going to the Super Bowl in Year 2, and he was fired last season after an 0-5 start. He’s done a great job coaching the Cowboys defense this season and has turned it around completely. Quinn is likely waiting for another NFL head coaching job, but a return to Gainesville wouldn’t be entirely out of the question if the opportunity arose.

O’Brien is perhaps most remembered for the way his tenure as the head coach of the Houston Texans ended. He was appointed the team’s general manager in 2020, a move that was widely regarded as a failure after he was fired from both roles after an 0-4 start last season.

Still, it’s hard to call O’Brien’s time in Houston — where he won division titles in four of seven seasons — a failure. And before that, he engineered one of the most impressive coaching jobs in college football over the last decade turning around a Penn State program that had been ravaged by sanctions after the child sex scandal.

He’s done a good job with Alabama’s offense this year, but his inability to handle roster management duties raises questions about his efficacy at a job like Florida.

Jimbo Fisher made a big splash when he got Elko, the defensive coordinator at Notre Dame, to follow him to College Station in 2018. Elko, 44, is considered one of the up-and-coming coaches in college football, and given the fact that he is leading his best defense, which ranks in the top 10, expect his name to come up quite a bit during the coaching carousel this offseason.

Elko is a good coach and could be a candidate for jobs like TCU, but given the importance of this hire for UF, it seems unlikely it chooses to go with a first-time head coach.

The many faces of Florida’s former head coach Dan Mullen