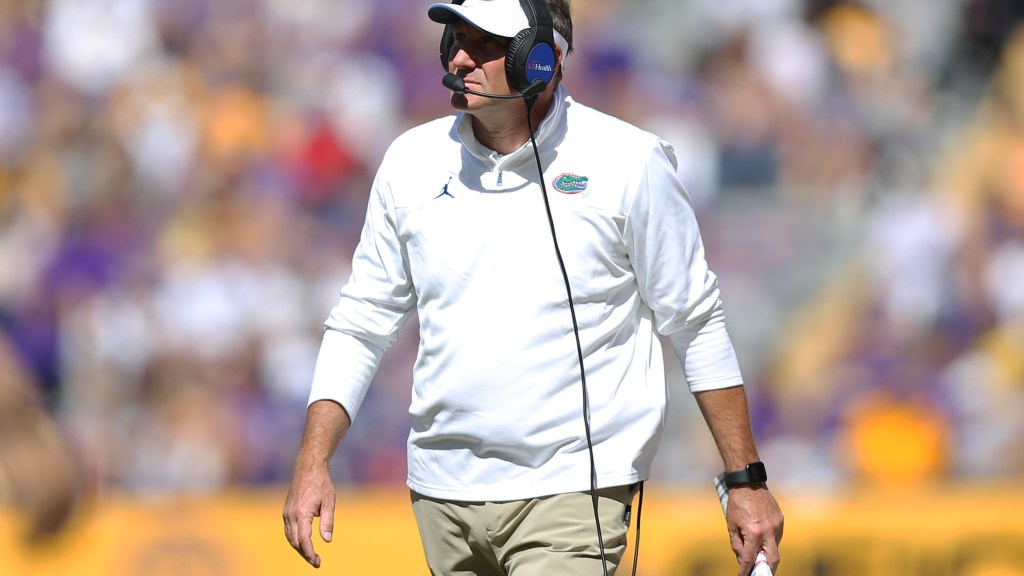 Since LSU lost its season-opener at UCLA, coach Ed Orgeron’s tenure drawing to a close there has felt like a foregone conclusion. Even after beating the Gators on Saturday, athletic director Scott Woodward still pulled the plug on a coach who had won a national title 21 months prior.

It was certainly quite a statement from LSU. It made it clear that the program isn’t willing to accept stagnation, even from a coach that was the architect of one of the greatest teams in college football history.

That certainly puts a good deal of pressure on coach Dan Mullen, whose loss on Saturday dropped his team just 4-3 in Year 4 of his tenure. CBS Sports’ Tom Fornelli wrote that, after Orgeron’s firing, Mullen assumes the mantle of the coach in the SEC on the hottest seat.

The problem Mullen faces is that Saturday was not an isolated incident. On the contrary, it marks the second straight season the Gators have lost to an LSU team in flux, and it drops them 4-3 on the season and 2-3 in the SEC. The team’s hopes of winning a division title are nonexistent no matter what happens against Georgia — I think we all know what’s likely to happen — and it fell out of the AP Top 25 for the first time since September 2018, Mullen’s first season in Gainesville.

Mullen is 33-12 at Florida, including 21-10 in the SEC. It’s a better record than Jim McElwain when he got canned, but Mullen wasn’t brought back to Gainesville to simply improve on McElwain. He’s there to compete for national titles like the Gators did when he was offensive coordinator under Urban Meyer, and right now, this team feels like it’s far away from that goal.

That’s pretty harsh criticism, and it’s hard to believe how quickly public opinion on Mullen has shifted. However, Fornelli isn’t calling for Mullen to meet Orgeron’s fate. At least, not yet.

To be clear, I’m not saying I think Mullen should be fired. In fact, It would be foolish of Florida to do so right now and he deserves at least one more season before it’s seriously considered.

But this is the SEC. You don’t need to ask Orgeron twice what that means, and now, Mullen is next in line for the meat grinder.

Firing Mullen, who has undeniably improved this program on the field, now would certainly be a risky move, and it’s unlikely something the administration is legitimately considering right now.

But it’s clear that changes need to be made. A replacement at defensive coordinator is probably a foregone conclusion, and Mullen may enter the 2022 season with more to prove than anyone else in the land.