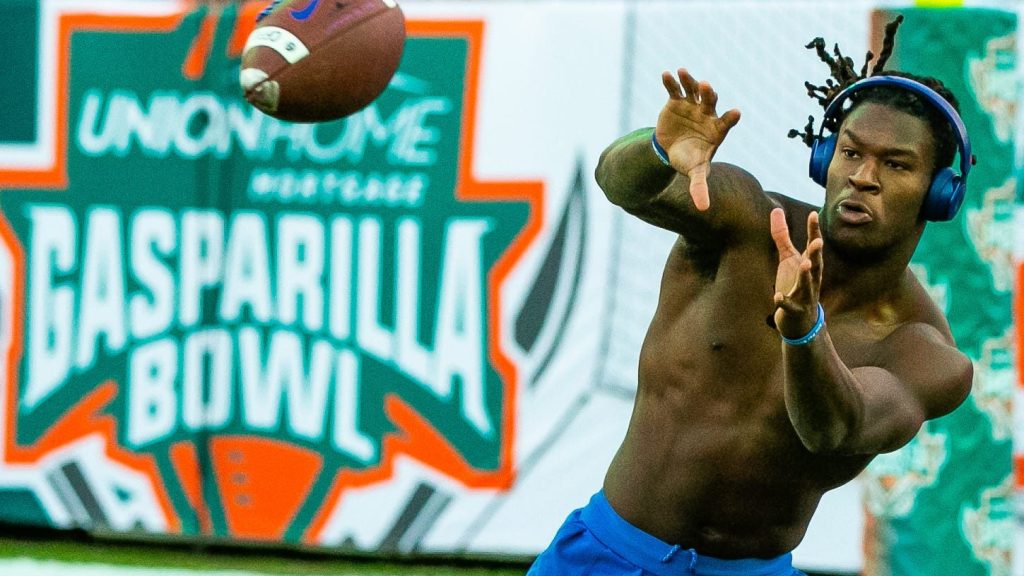 Burke, a redshirt freshman who was recruited as a four-star, is what you’d expect from a high-end Billy Gonzales signee. He’s fast and has long limbs, making him a downfield threat who can erase quarterback mistakes with a broad catch radius. South Carolina learned about his burners the hard way when he made a 61-yard play against the Gamecocks last season. Whether he can make that happen with regularity remains to be seen, as he was on a very short leash under Dan Mullen.

Fraziars came to Florida with an excellent prospect pedigree, packing the physical tools to be a downfield burner and a catch-point terror. Refinement, or, more correctly, a lack thereof, is what prevented him from being a household name during the 2020 recruiting cycle. Entering his third season, Fraziars hasn’t gotten much playing time in his Gators career. The previous staff mainly utilized him as a blocker or red zone threat.

Henderson was a very similar recruit to Fraziars in the 2020 class. He was given more of an opportunity to prove his worth last season than Fraziars, but was largely miscast as the primary kickoff returner and struggled in that role. He’ll almost certainly be overturned from that position and start back at square one as a wide receiver in the new scheme.

Pouncey has functioned more or less as dependable depth since transferring from Texas. As a 2017(!) recruit, he’s a graduate who will be entering the 2022 season with a wealth of experience across two coaching staffs. He plays on special teams as well, recording more tackles than receptions in 2021. He had harsh words for McElwain’s staff as a recruit and probably never expected to spend half his seasons of eligibility in Gainesville. Funny how life works like that, huh?

Reynolds was pegged by 247Sports as a probable freshman contributor after enrolling early last season, but that didn’t happen when fall came around. His route-running and physicality make him different than many of the wide receivers on this roster and he may get his shot to contribute as a redshirt freshman. The Gators don’t have many reliable options in the slot and he could potentially fill that role.

Shorter was the most productive of the players in this position group last season, featured as the Gators’ second option on the outside. The former five-star is a big body who is unafraid to play with physicality. He transferred to Florida after a rocky first season at Penn State and Coach Franklin’s comments about him afterward weren’t all too kind. He’s found his niche in the Swamp and will thrive there in 2022.

Weston wasn’t a high-profile recruit but he was well-liked by the former coaching staff. His reputation is that of a supremely hardworking and coachable kid, which will appeal to the new staff as they assemble the depth chart. With three years of experience to leverage and a power vacuum in the Swamp, Weston’s nature as a playbook junkie will serve him well as he adapts to the new scheme in spring camp.

Whittemore was utilized largely as a possession receiver last season, functioning in practice as a security blanket for Emory Jones as he struggled all season to read his progressions. His inside-outside versatility and big frame allow Whittemore to fill just about any role he’s asked to take on and a healthy season will be big for his development.

Napier promised that he’d carry a large walk-on roster into the season, and this group of players accounts for several of those non-scholarship players. Cross, Curtis, Jackson, Sawyer, and Spierto are all walk-ons with little or no game experience in the Swamp. They’ll get a fair shake in spring camp — the coaching staff has been open to finding talent from any source — but don’t expect any of them to make a major in-season contribution.