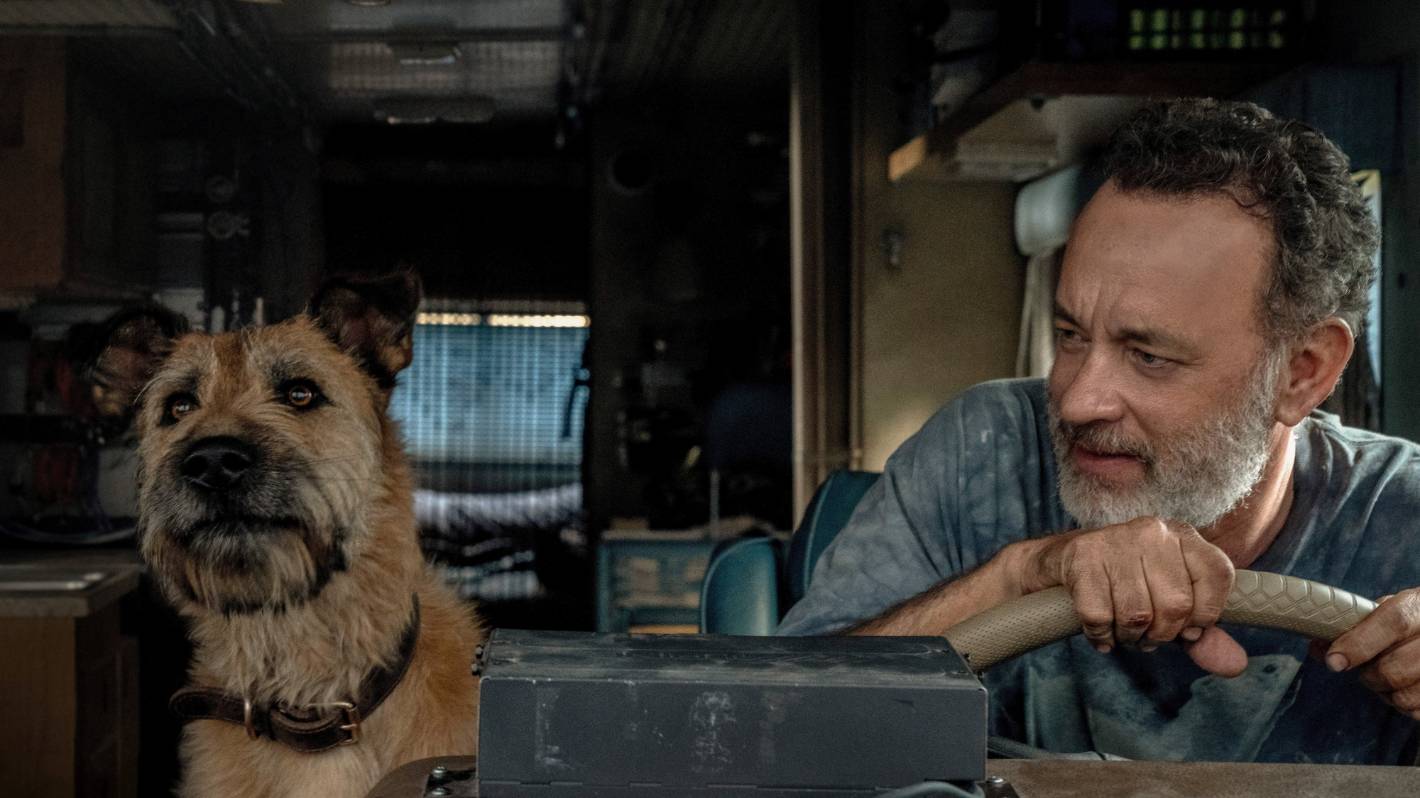 Two decades after starring opposite a volleyball named Wilson, Tom Hanks is back doing his solo schtick.

Only this time, rather than being stuck on a desert island, the now 65-year-old is on his tod in post-apocalyptic St Louis.

All Finch Weinberg has for company is a dog named Goodyear and a robot named Dewey. Using the skills learned over a lifetime of working for Tae Technologies and recent years digesting and digitising the library of books he has at his disposal, he’s also nearly finished a sentient android who he will task with a fourth directive in addition to the usual “Asimov-trio” – ensuring Goodyear’s health and wellbeing in his absence.

It’s now 15 years since a solar flare took out the Earth’s ozone layer and the electromagnetic pulse caused by its shockwave destroyed virtually all the planet’s electronics. With soil temperatures regularly reaching around 65 degrees centigrade each day, all crops and vegetation have disappeared, sand has engulfed many cities and humanity has all but died out, as food supplies have dried up.

Unstable weather still causes plenty of havoc, tornados and sandstorms the main culprits. But when Finch’s forecasting equipment detects a superstorm of 15 weather events converging on his location, he knows it’s finally time to pack up the 1984 Fleetwood Softwind and find a safer base.

That means heading west, in the belief that San Francisco offers the best chance of a more stable environment (clearly forgetting its proximity to a major fault line). However, the 1800-mile journey is fraught with danger, not only from the potential threat of anyone they may encounter, but also Finch’s ailing health and the newly born Jeff’s somewhat misplaced confidence in his own abilities.

Originally announced as Bios and set to star Samira Wiley, Laura Harrier and Skeet Ulrich (all now nowhere to be seen), Finch is a slight, but emotionally satisfying buddy dramedy that’s kind of a Cast Away-meets-Chappie by way of A.I.

It seems like an odd directorial project for Miguel Sapochnik, the helmer of two of Game of Thrones’ most breathless, impactful episodes (Battle of the Bastards and The Long Night), but, as well as ensuring the few action-sequences are suitably adrenalised, he also excels in the quieter moments, as Hanks berates and teaches his young charge the ways of the world.

“I don’t need companionship. I don’t need a friend, I need you to do your job,” he explains at one point to the chastened android. “I know you were born yesterday, but you need to grow up.”

Like George Clooney in last year’s The Midnight Sky, this provides the veteran actor with a chance to really stretch his legs and demonstrate he still has plenty to offer Hollywood as a leading man, while delivering a performance that has nuance and depth.

Credit too Caleb Landry Jones (who deservedly took home the award for best actor at this year’s Cannes Film Festival for his role in Aussie gunman drama Nitram) and the movie’s motion-capture team, who bring “Jeff” to life in all his slapstick and initially child-like glory.

Not everything is an unqualified triumph, film industry veterans Craig Luck and Ivor Powell’s first screenplay is guilty of some flaky, sappy and schmaltzy science, while the tale’s rather inevitable end comes somewhat abruptly.

However, there’s a lot to like and admire about this post-nuclear family road movie, and, if you’re a fan of Hanks, this is two hours definitely well spent.

Finch is now available to stream on Apple TV+.