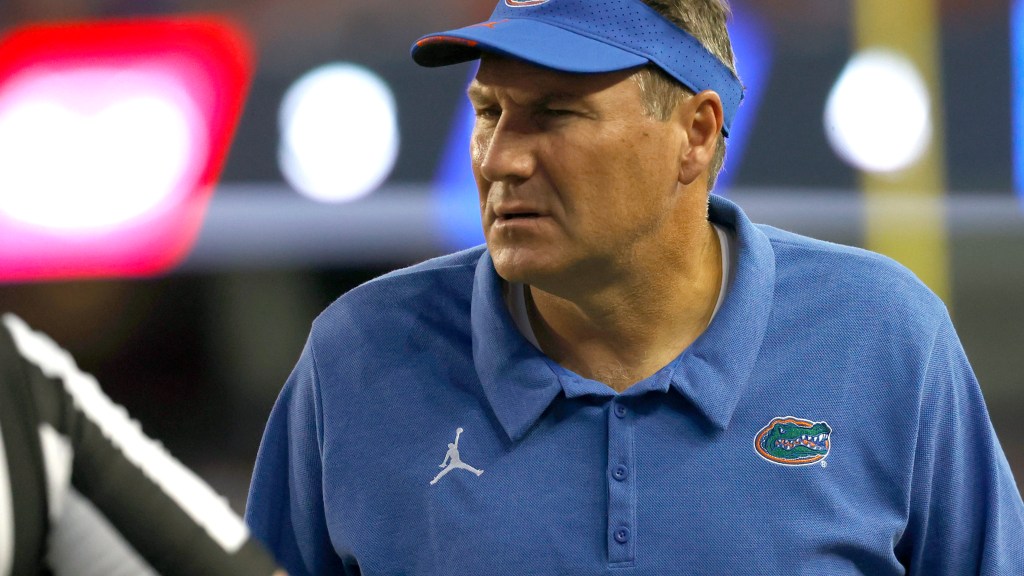 It’s no secret that there’s a lot of pressure in Gainesville to get things turned around. This year’s Florida team sits at 4-5 on the season, and though it will be favored in each of its three remaining games, it won’t be a cakewalk to bowl eligibility.

Saturday’s 40-17 loss at South Carolina demonstrated that. It was arguably the worst loss of head coach Dan Mullen‘s tenure at UF, and in the wake of it, he opted to fire two of his longtime assistants in defensive coordinator Todd Grantham and offensive line coach/running game coordinator John Hevesy. The latter has coached under Mullen in some capacity every year since 2001.

Those changes may take the pressure off the embattled head coach for now, but ESPN’s Mark Schlabach still thinks this story ends with Mullen being let go. It’s just a question of when.

The biggest indictment against Mullen is that the Gators just aren’t playing hard and aren’t disciplined. They’ve lost back-to-back games by 20 or more points for the first time in his tenure. They’ve dropped eight of their past 10 games against Power 5 opponents, with the only wins against Tennessee and Vanderbilt.

Florida’s biggest problem is recruiting. The Gators’ current class for 2022 is ranked seventh in the SEC and 23rd in the country by ESPN. Missouri, Georgia Tech, Indiana, South Carolina and West Virginia have classes that are currently ranked higher. That’s not good enough for the flagship university of one of the most fertile recruiting states in the country.

Sure, Mullen’s comments last week about not wanting to talk about recruiting until after the season might have been taken out of context and blown out of proportion. But it’s no secret that recruiting isn’t his specialty and that he doesn’t particularly like it.

With games left against FCS opponent Samford, Missouri and Florida State, Mullen’s job seems safe for now. Losing any of those games might change that, however.

Schlabach may think Mullen’s seat isn’t particularly hot at the moment, but he even grants that another loss could change things for him. In his segment about Mullen, he points out how quickly this team has collapsed.

On Sept. 18, Florida nearly upset the No. 1 Crimson Tide again in a 31-29 loss. That was the highlight of the 2021 season. Since then, the Gators fell at Kentucky for the first time since 1986, lost to an LSU team that had already fired its coach (and would announce it the next day), looked thoroughly overmatched in a 27-point loss to Georgia, then suffered its worst loss in school history against South Carolina, a rebuilding Gamecocks team no less.

It was clear a change at defensive coordinator needed to be made, at the very least. UF has allowed 123 points in the last three games, which, per Schlabach, is the second-most points the program has allowed in a three-game stretch over the last 100 years.

It seems athletic director Scott Stricklin is giving Mullen a chance to fix things, but considering how fast things have dropped off, one has to imagine the leash is getting shorter and shorter by the week.