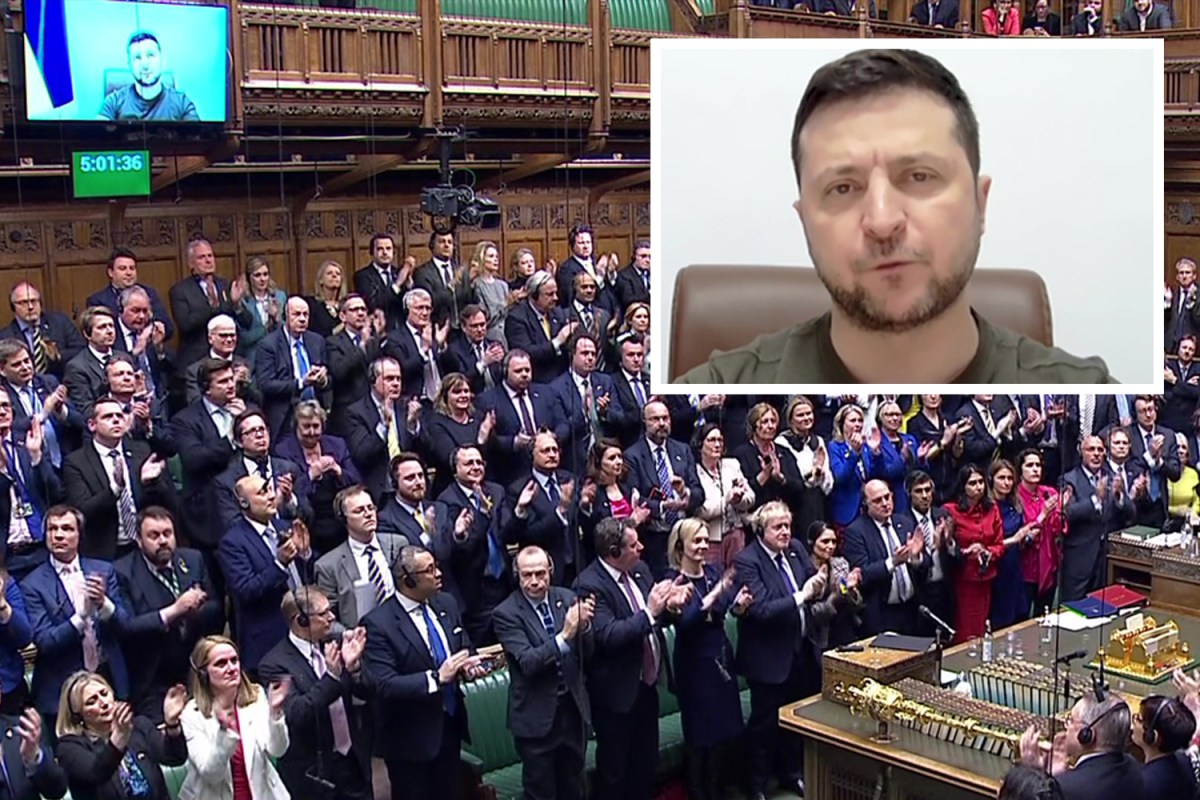 “Mr Speaker, all the Members of Parliament, ladies and gentlemen, I am addressing all the people of the United Kingdom and all the people from the country with a big history.

“I am addressing you as a citizen, as a president, of also a big country, with a dream and big effort.

“I would like to tell you about the 13 days of war, the war that we didn’t start and we didn’t want. However we have to conduct this war, we do not want to lose what we have, what is ours, our country Ukraine.

“Thirteen days of this struggle, on day one at four o’ clock in the morning we were attacked by cruise missiles. Everybody woke up and people with children, the entire Ukraine and since that we have not been sleeping.

“We have all been fighting for our country, with our army.

“On day two we have been fighting air strikes and our heroic military servicemen on the islands have been trying to fight – when Russian forces demanded that we lay down arms, however, we did continue fighting and we did feel the force of our people that opposed the occupants until the end.

“The next day the artillery started fighting us. Our army showed us who we are.”

He added: “On day four we started getting people captive, we have not been torturing them, we remain humane even on day four of this terrible war.

“On day five the terror against us was going on against children, against cities and constant shelling has been taking place around the country, including hospitals, and that didn’t break us, and that gave us feeling of big truth.

“On day six, the Russian rockets fell on Babi Yar – that is the place where the Nazis killed thousands of people during the Second World War – and 80 years after the Russians hit at them for the second time, and even churches are getting destroyed by shelling.

“On day eight, we have seen Russian tanks hitting the atomic power station and everybody got to understand that this is the terror against everyone.

“On day nine, there was a meeting of Nato congress without the result we were looking for. Yes, we did feel that unfortunately that the alliances don’t work properly always and the no-fly zone cannot be enforced.

“On day 10, the Ukrainians started protesting and stopping the armoured vehicles with their own hands.

“On day 11, the children and cities were being hit and hospitals as well with the rockets and constant shelling, and on that day we realised that Ukrainians became heroes, entire cities, children, adults.

“On day 12, the losses of Russian army exceeded 10,000 people killed, and also including the general, and that gave us hope that there will be some kind of responsibility for those people in front of the court.

“On day 13, in the city of Mariupol that was attacked by the Russian force a child was killed. They do not allow any food, any water and people started panicking.

“I think everybody can hear that people do not have water over 13 days of this situation, over 50 children have been killed. These are the children that could have lived but these people have taken them away from us.

“Ukraine were not looking to have this war. The Ukraine have not been looking to become big but they have become big over the days of this war. We are the country that are saving people despite having to fight one of the biggest armies in the world. We have to fight the helicopters, rockets.

“The question for us now is to be or not to be. Oh no, this Shakespearean question. For 13 days this question could have been asked but now I can give you a definitive answer. It’s definitely yes, to be.

“And I would like to remind you the words that the United Kingdom have already heard, which are important again. We will not give up and we will not lose.

“We will fight until the end, at sea, in the air. We will continue fighting for our land, whatever the cost.

“We will fight in the forests, in the fields, on the shores, in the streets.

“I’d like to add that we will fight on the banks of different rivers and we’re looking for your help, for the help of the civilised countries.

“We’re thankful for this help and I’m very grateful to you Boris, please increase the pressure of sanctions against this country (Russia), please recognise this country as a terrorist state and please make sure our Ukrainian skies are safe.

“Please make sure you do what needs to be done and what is stipulated by the greatness of your country.

“Glory to Ukraine and glory to the United Kingdom.”