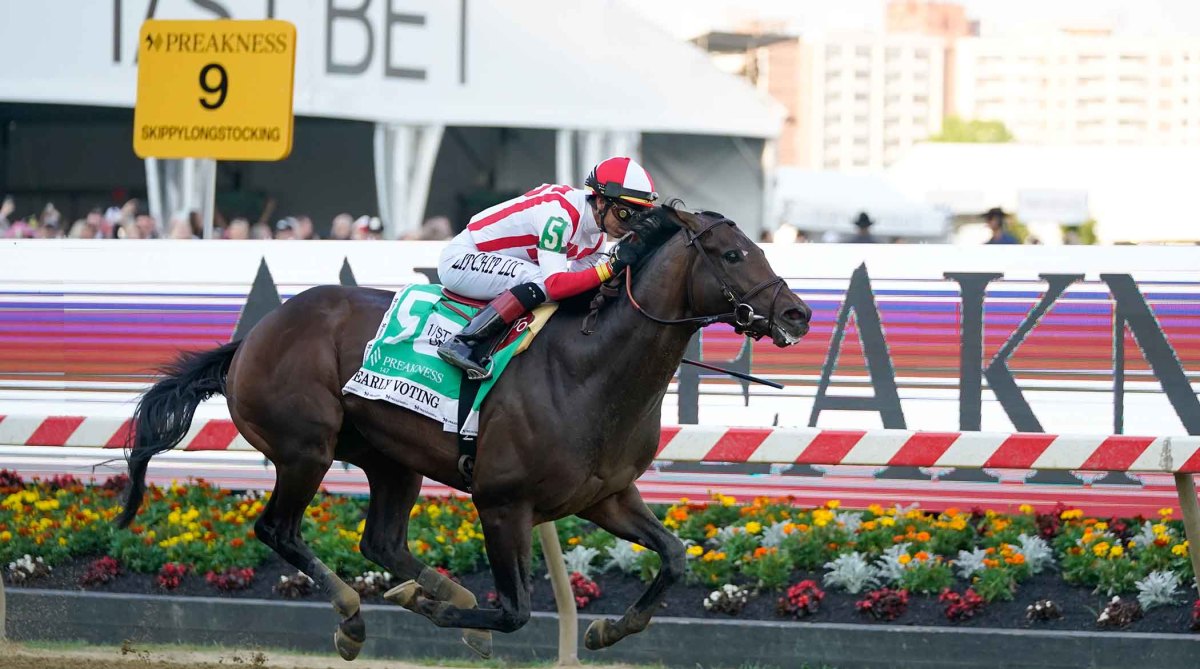 Chad Brown’s Early Voting broke away from the pack on Saturday and captured first in the 147th edition of the Preakness Stakes.

The racehorse, ridden by Jose Ortiz, finished just ahead of Epicenter, the Preakness runner up at Pimlico Race Course in Baltimore. Creative Minister and Secret Oath finished third and fourth respectively.

Epicenter, Secret Oath, Early Voting, Fenwick and Simplification, who finished fourth in the Kentucky Derby two weeks ago, were the top five horses with the best odds to win the Preakness Stakes. Early Voting’s 5-1 odds were the third best ahead of Saturday’s race.

Early Voting, who earned the fourth win of his career, entered Saturday coming off a second-place finish to Mo Denegal in the Wood Memorial on April 9.

Seth Klarman, owner of the Early Voting, grew up threw three blocks away from Pimlico. Not only did Ortiz give the perfect ride in leading Early Voting to victory, the win comes on Klarman’s 65th birthday.

“Winning once was like a dream of a lifetime,” Klarman told the NBC broadcast after the race. “Winning twice is an extraordinary experience…. Ortiz did a masterful ride.”

Klarman’s Cloud Computing won the 2017 Preakness Stakes, which was held a day before his 60th birthday. After the exhilarating win on Saturday, Klarman took a moment to soak in another victory on a major milestone of his own life.

“Cloud Computing was a once-in-a-lifetime,” Klarman said after the race, “and now I have a second-in-a-lifetime.”

Early Voting did not participate in this year’s Kentucky Derby as Klarman and others thought the horse “needed a little more seasoning” and rest. “We are so glad we waited,” Klarman said.

The Preakness Stakes did not include this year’s Kentucky Derby’s winning horse, Rich Strike. Richard Dawson, owner of Red TR-Racing, made the decision to skip racing in the Preakness to train and prepare the horse for the Belmont Stakes on June 11.

As a result, the number of horses to win the three races of the Triple Crown will stand at 13. They include Sir Barton, Gallant Fox, Omaha, War Admiral, Whirlaway, Count Fleet, Assault, Citation, Secretariat, Seattle Slew, Affirmed, American Pharoah and Justify.

It also signaled that horse racing will not have a Triple Crown champion in 2022 and marked the fourth time in 26 years the Derby winner didn’t make the trip to Maryland.

More than a week ago, in a statement, Dawson said it had always been the team’s plan to determine Rich Strike’s Triple Crown schedule based on the outcome of the Kentucky Derby. If the horse was able to run in the Derby, they expected to “give him more recovery time” and rest for the Belmont.

“With our tremendous effort and win in the Derby, it’s very, very tempting to alter our course and run in the Preakness at Pimlico, which would be a great honor for all our group,” the statement read. “…We are going to stay with our plan of what’s best for Ritchie [Rich Strike] and what’s best for our group, and pass on running in the Preakness, and point toward the Belmont in approximately five weeks.”