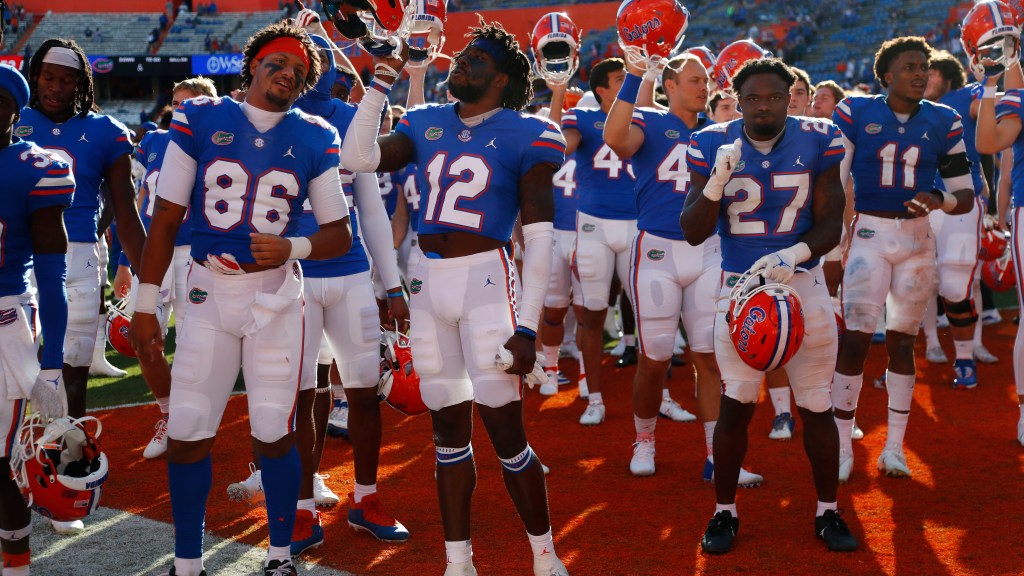 Florida’s victory over Samford last week wasn’t the bounceback blowout victory many predicted. The Athletic’s staff’s composite prediction was 49-13, but Florida needed 70 points after giving up 52 to an FCS school. As a result, the group is far less confident in a Gators win this week over Missouri.

The Tigers were considered a potential late-season spoiler for the Gators before the season started. Although playoff hopes have long since faded for Florida, both teams are in need of one more win to become bowl eligible. Dan Mullen also needs a win to avoid being the first Gators coach since 1986 to finish the season with just two conference wins.

The writers at the Athletic seem to think Florida prevails in this one, but Florida is 0-3 on the road against SEC teams this year.

Florida beat writer G. Allan Taylor has the most to say about the game this week as the one who covers the Gators the most. A three-point margin of victory for Florida is anything but optimistic, but his point about feelings carrying over from last year’s brawl is a good one. Zachary Carter is still looking to boost his draft stock and this could be a big game for him.

In September this looked like a battle for SEC East runner-up. Instead, we encounter two 5-5 teams jostling to become Birmingham Bowl runner-up. Considering how both head coaches fired assistants midseason, perhaps they can swap resumes during pregame warmups, or grapple at midfield in honor of last season’s brawl. Despite being fined $25,000 for that outbreak, Dan Mullen said he hasn’t thought about it and there won’t be any carryover. Well, three of the five players suspended are still active, as is Trajan Jeffcoat, whose dubious hit on Kyle Trask sparked the flare-up. So maybe there will be some chippiness paid forward, and let’s be blunt: The Gators could use some fire after going through the motions against South Carolina and Samford. Against Mizzou’s 129th-ranked rushing defense, Florida should get a combined 40 carries from Dameon Pierce, Emory Jones and Anthony Richardson. Florida 33-30

Kendall reminds us that feelings are likely to carry over for both teams, but he goes with Florida by a touchdown with the Gators’ backs against a wall.

“The Dan Mullen Watch” continues in Missouri. After how testy this game got last year, you know Drinkwitz and the Tigers would love to be the ones to give Mullen his final nudge over the cliff. I’m still in the Mullen survives camp, but if the Gators lose this game all bets are off. Florida 42-35

After predicting a 41-point win last week, Khan has tempered his expectations for Florida and is going with the home team in this one. Florida has struggled on the road at Kentucky, LSU and South Carolina this season, making it surprising that Khan is the only one to pick Mizzou.

Florida went from taking Alabama down to the wire in September to getting routed by South Carolina and needing a strong fight to beat Samford at home in November. That’s a steep fall. It’s hard to trust the Gators at this point. But Missouri has a quarterback dilemma of its own with Eli Drinkwitz deciding between Connor Bazelak and Brady Cook. Not an ideal situation to have in mid-November. Neither team gives me confidence, so I’ll take the home underdog. Missouri 37-34

Suttles expects both defenses to struggle, but he has Florida taking home the victory by three points. This one could come down to who has the ball last.

Your guess is as good as mine. I have no idea what to expect from Florida’s defense. Missouri might score at will. Florida’s likely to score a lot too. But I don’t trust Mullen to cover a spread right now. Florida 34-31

Brodie Miller is the only one to pick Florida by more than one score this week. On paper, the Gators should win easily, but things haven’t gone close to according to plan this season.

It’s really just a matter of separating brain from gut. There’s little tangible way that Florida should lose this game, even with its recent problems, but it comes down to asking ourselves if the problems in Gainesville are so bad they can lose another like this. I have to go with brain here. Florida 38-24

Emerson has Florida winning, but he makes sure to take some shots at Dan Mullen before dropping his prediction.

New proposal for Florida: Let Mullen stay as head coach of offense, then hire someone else to run the defense, recruiting and hold press conferences. Maybe that seems like you should just hire a new coach. Well … yeah. Florida 45-40