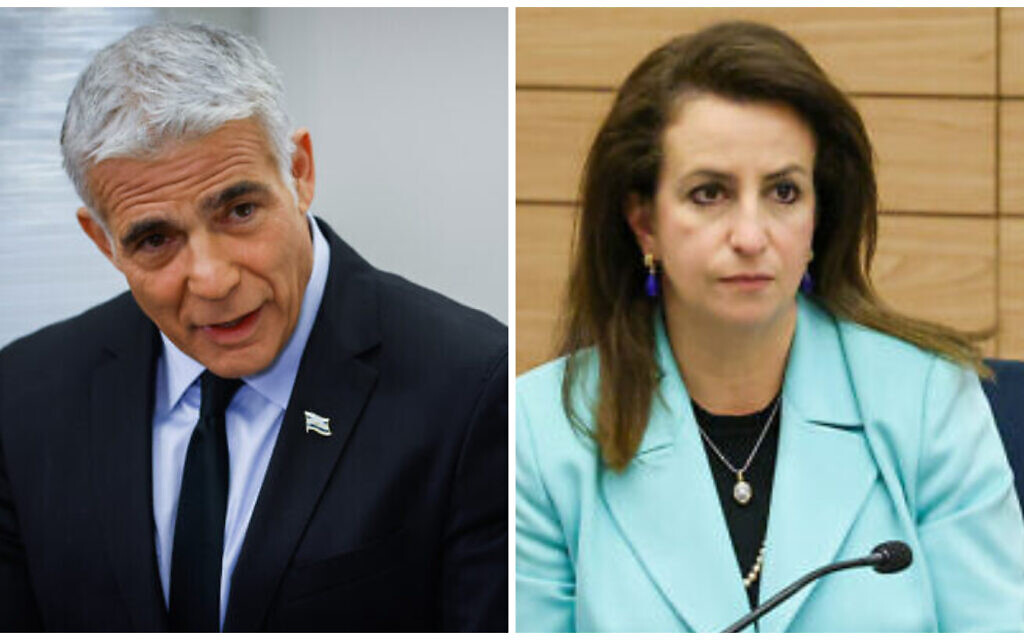 In his first comments since the resignation of Meretz MK Ghaida Rinawie Zoabi from the coalition, Foreign Minister Yair Lapid on Friday reassured that it was too early to eulogize the government.

“We have been eulogized five times already with special broadcasts — and we came back,” he wrote on Facebook. “Now those same people are telling you that it’s all over — it’s not over, we are still here.”

Lapid further said that the government was “the right thing for the state of Israel and the people of Israel,” adding that he will not allow it to collapse.

“We have no intention of surrendering or giving up on it. We have no intention of giving [former Prime Minister Benjamin Netanyahu] “Bibi” and [far-right MK Itamar] Ben-Gvir a chance to destroy the country. We will do what we do every time, sit with whom we need to sit, and fix what needs to be fixed,” he said.

Rinawie Zoabi’s resignation, announced Thursday, sent shockwaves through Israel’s political arena, putting Prime Minister Naftali Bennett’s ruling coalition on the brink of collapse, with the support of only 59 MKs out of 120.

But with the other 61 Knesset members divided between a right-religious bloc, the six-MK Arab-majority Joint List party, and three coalition defectors who could face sanctions if elections are called, speculation remained rampant over whether opposition leader Benjamin Netanyahu could garner the 61 votes needed to dissolve the Knesset, or even replace the coalition with his own government — without resorting to elections — should more right-wing lawmakers jump ship.

However, Rinawie Zoabi on Friday seemed to be less keen on toppling the government, saying that she will continue to support the coalition “in the meantime.”

“I will support the coalition in the meantime,” Rinawie Zoabi said in an interview with Army Radio, “as long as it is attentive to the needs of the Arab society.”

In a separate interview with Arabic-language Nas Radio, the lawmaker stated that she does not rule out the possibility of resigning from the Knesset.

“My goal is to end my tenure with my head held high in the Arab community,” she said.

If Rinawie Zoabi were to resign from Knesset, Meretz would receive her seat back and the next person on the party slate will enter Knesset, putting the coalition back to 60 MKs.

Senior coalition lawmakers were in contact with Rinawie Zoabi on Friday in attempts to resolve the crisis.

A conversation between the lawmaker and Meretz party head Nitzan Horowitz on Friday was said to have been “long and good,” according to Hebrew-language media report, which gave no sourcing or further details on the talks.

Horowitz on Thursday had decried the defection of the lawmaker and the possible death of the unlikely coalition, which last June managed to push Netanyahu out of power for the first time in over a decade.

“We want to understand where we stand,” Abbas told the outlet.

Ra’am leader MK Mansour Abbas delivers a statement to the press at the Knesset, May 11, 2022. (Olivier Fitoussi/Flash90)

When asked by Army Radio Friday how she would vote if Likud submits a bill to dissolve the Knesset next week, Rinawie Zoabi repeated previous statements and cited her resignation letter, saying she has not decided on the matter and will examine everything relevant to it.

Rinawie Zoabi has cited the recent police conduct on the Temple Mount and at the funeral of slain Al Jazeera journalist Shireen Abu Akleh as the reasons for her resignation, with the latter being the “straw that broke the camel’s back.”

On Thursday, Rinawie Zoabi clarified that she “won’t automatically blow up the coalition.” If Interior Minister Ayelet Shaked and Defense Minister Benny Gantz change their behavior, she continued, “I might support the coalition from the outside.”

Shaked has been one of the most vocal right-wing members of the government, advancing the so-called Citizenship Law, which renewed a ban on permits for Palestinians who marry Israelis to live with their spouses in Israel. Gantz’s office advanced plans for almost 4,500 settlement homes earlier this month, many of which are located deep in the West Bank, further complicating prospects for a two-state solution.

Rinawie Zoabi’s refusal to vote with the razor-thin coalition on key bills had proven a headache for colleagues and she had been set to be shuttled off to Shanghai to serve as Israeli consul general. However, she withdrew her nomination for the post when she left the coalition, a spokesperson said.

Some reports suggested that Rinawie Zoabi’s resignation was linked to delays in the nomination process.

While Lapid announced Rinawie Zoabi’s appointment in February, he held off on submitting her nomination to the Civil Service Commission until last month. According to Haaretz, this was due to opposition from members of the panel to the appointment of the left-wing lawmaker.

Knesset officials also notified Rinawie Zoabi that she would have to resign from parliament immediately after the Civil Service Commission’s confirmation, which angered the Meretz MK, who wanted to remain in her current post until just before her term in Shanghai was slated to commence later this year, Haaretz reported.

According to the Kan public broadcaster, Lapid promised Rinawie Zoabi during their Thursday call that he would see to it that she would become consul general in Shanghai if she walked back her resignation.