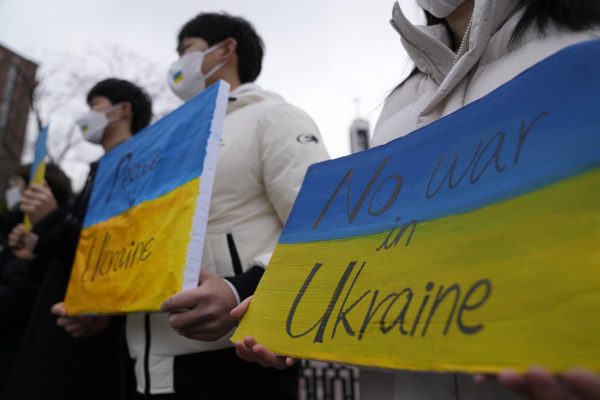 On April 7, the U.N. General Assembly voted on a resolution to suspend Russia from its membership in the U.N. Human Rights Council, which saw support from Asia-Pacific countries drop compared to previous resolutions condemning Russia’s invasion of Ukraine. The vote came amid continued strong U.S. engagement with Asia-Pacific countries. Earlier this week, U.S. Secretary of State Antony Blinken was at a NATO meeting including representatives from Australia, Japan, and South Korea, and this weekend will see the India-U.S. 2+2 convene in Washington, D.C., with Ukraine on the agenda.

U.S. State Department Counselor Derek Chollet, a senior policy advisor to the secretary of state, gave an exclusive interview to The Diplomat’s Shannon Tiezzi to discuss U.S. diplomacy in the Indo-Pacific region on the Russia-Ukraine war.

I wanted to start by getting your reaction to the recent vote on suspending Russia’s membership in the U.N. Human Rights Council. A lot of votes shifted away from supporting that resolution toward abstentions or even noes, compared to previous resolutions. Is there a sense of disappointment at that change in support?

No. I think the bottom line is what matters the most, which is that for only the second time in history a country has been removed from the U.N. Human Rights Council. So we’re very pleased with the outcome. We think it’s an outcome that is entirely warranted and justified given what Russia has been doing in Ukraine. After the images coming out of Bucha, it was quite clear I think that the country that can perpetrate acts like that has no place on the U.N. Human Rights Council. My understanding is that Latvia is now taking their place on the council, which I think is is a fitting resolution to this issue.

So no, we were very pleased with the outcome. I think it’s very significant and it sends a very clear message that Russia’s behavior is completely unacceptable and there needs to be accountability for what it’s doing. Just today we heard there is another report of a horrific attack on a train station that has killed at least, in the latest reports, as many as 50 people. Unfortunately, I think we have to assume that once the tide rolls back and Russia retreats further from Ukraine, we are going to find even more evidence of atrocities and crimes against humanity than we’ve seen thus far.

Southeast Asia had a particularly large shift, with even Singapore which has sanctioned Russia itself, abstaining on the latest vote. Was there a concerted U.S. effort to try and get these countries to support it? Do you have any comment on those abstentions?

I think we want to focus on the outcome here. Different countries gave explanations for their vote in different ways. For example, there is an open inquiry into what’s going on inside Ukraine by the Human Rights Council and so some countries said, “Well, we’re not going to vote for expulsion yet. Let’s wait for the conclusion of the inquiry.” Our view was, there’s abundant evidence that there are gross violations of human rights occurring inside Ukraine, and as I said, this will only get worse over time, so we think it warrants a vote. But nevertheless, we are not going to respond over the top in any way if some countries abstained, because the bottom line remains that Russia’s off the Council.

I was in Southeast Asia last week. I was in Vietnam and the Philippines. We talked a lot about Russia and Ukraine. Clearly, Vietnam, for example, is a country with a long relationship with the Soviet Union and then Russia. Its military is quite close to the Russian military. At the same time, they’re clearly struggling with this. Vietnam can related in many ways to the plight of the Ukrainian people, and the resilience and the bravery of the Ukrainian people, in the face of an onslaught by a much larger neighbor.

One of the things that we talked about, particularly with our Asian friends and our ASEAN friends, is the importance of the fundamental principles at stake, and the idea that if you look at the ASEAN Charter and the core principles expressed in the ASEAN Charter, particularly issues like sovereignty and the peaceful resolution of disputes, all of those are being violated today by Russia against Ukraine. My sense is there’s wide agreement on that within ASEAN, with an asterisk really around Burma, of course.

We’ve been gratified by the level of support and unity we’ve seen thus far, but we’re going to continue the conversation with our ASEAN friends, particularly about ways forward, in terms of their relationship with Russia but also how we can work together to try to address the effects of Russia war against Ukraine.

China switched from an abstention to a no vote, but India did not – it maintained its abstaining vote, as it had in previous resolutions. Do you see a divergence in approaches between India and China? Despite both being reluctant to criticize Russia directly, it seems that they are adopting different positions on the issue.

Secretary Blinken and Secretary Austin will be meeting here in Washington on Sunday and Monday [April 10 and 11] with their Indian counterparts, where we talk about the relationship at large. Obviously they’ll spend a lot of time also talking about the situation with Russia and Ukraine, but more importantly talking about our strategic relationship and all the important issues that the U.S. and India are working on together.

We have been very clear with the PRC leadership. Jake Sullivan, the national security advisor, and Secretary Blinken have both said this directly to Chinese counterparts, as has President Biden to President Xi, that China will pay a price if it sides with Russia in terms of providing it material support, if it helps Russia evade sanctions. And I think the Chinese are themselves struggling with this.

There was an EU summit that they were looking forward to that occurred earlier this week [on April 1]. That was a tough summit between the EU and China because the Europeans made clear that they needed to talk about Russia and Ukraine. The Chinese were trying to move on, elide the subject to talk about other things. China clearly has stated as a goal for its own ambitions to have a close relationship with Europe. It’s going to be very hard for them to achieve that if they continue to side with Russia, which they seem to be intent on doing.

Does the U.S. have serious concerns about India helping Russia evade sanctions? There’s been some movement toward increasing purchases of Russian oil and gas.

In U.S. diplomatic interactions with Asia-Pacific countries – your trip to Southeast Asia, the upcoming U.S.-India meetings – is Ukraine a top agenda item as those meetings? Or is it one of many agenda items that the U.S. is focusing on right now.

It’s the latter. It’s clearly an agenda item, because the crisis in Ukraine is a global crisis, it’s affecting every country around the world, whether food prices, fuel prices, countries’ relationship with Russia, countries that are deciding to support Ukraine either in humanitarian support or economic support or in some cases military support, whether it’s lethal or non-lethal.

And I think it’s really important to note, I was just in Brussels yesterday with Secretary Blinken, and he had bilateral meetings with the Koreans, the Japanese, and the Australians, who were all there. For the first time at NATO we had our four Asian partners there, and New Zealand was there virtually, but not in person. For the first time those four Asian allies sat around the table together with all 30 NATO countries to talk about NATO in the Indo-Pacific but also Russia and Ukraine. But we also talked about critical issues in the Indo-Pacific region, whether it’s North Korea or China or the situation in Myanmar.

Our allies and partners in the Indo-Pacific are worried about Russia-Ukraine in terms of what it means for them, but also in terms of what lessons China takes from how the world is handling this situation, whether it’s how the world is coming to the defense of Ukraine, also how they’re punishing Russia with sanctions and the effects of the those sanctions on Russia and Russian decision-making. It’s clear, which I experienced first-hand last week in Manila and Hanoi, that our partners are watching this and seeing what lessons China and others can draw from the Russia-Ukraine conflict for their own concerns, for example the South China Sea or Taiwan.