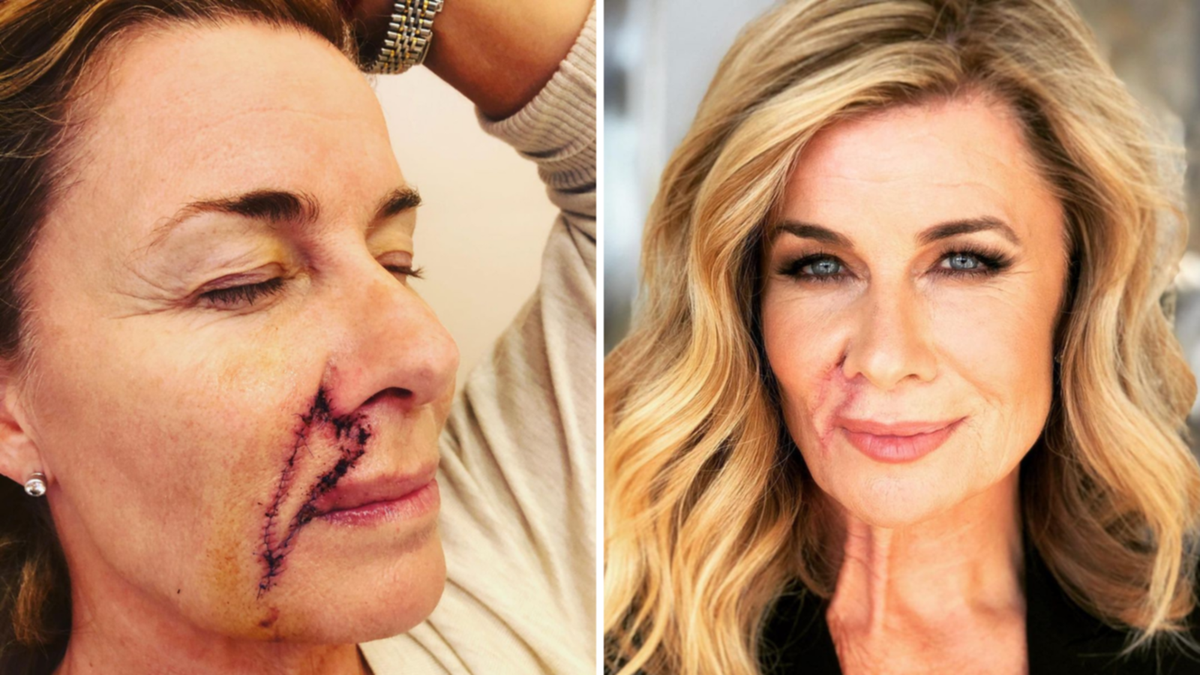 Deborah Hutton has forged a long and highly successful career as a model, magazine editor and television presenter.

But the household name says her latest role – advocating the need for regular skin-chancer checks – is her most important.

WATCH IN THE VIDEO ABOVE: Deborah Hutton shares her skin cancer journey to help other’s

“Out of everything I’ve done or accomplished, this is the most meaningful thing I have ever done with my life,” she says.

Two years ago, Deborah had surgery to remove skin cancer from her face.

Now aged 60, she says her brush with cancer is still far from over.

“It will happen again – I’m not out of the woods,” Deborah tells 7Life.

“That area of the face is a freeway for skin cancer.”

The media personality has spent the past few months travelling around the nation with 7NEWS Spotlight, speaking to experts about the disease that touches two in every three Aussies.

“This is Australia’s disease, we own this,” she says.

The close-up photo showed a triangular shaped wound stretching from her outer right nostril, past the corner of her lips to her chin and back up to her nose.

The lengthy scar was the result of two basal cell carcinomas (BBC), a type of skin cancer, being delicately removed by the star’s trusted surgeon.

Deborah reveals a wave of gratitude washed over her when she woke, relieved her surgeon had successfully removed all the cancer.

“I was a bit sore and felt sorry for myself but I know skin heals,” she says.

“I’ve got a crooked smile now but at least I am still smiling.”

It’s not the first time she’s had skin cancer, having had near-identical surgery nine years earlier.

But this operation frightened Deborah so much she now has her skin checked every three to four months.

“My paranoia is high,” she says.

“I know my future is going to be under a surgeon’s knife, cutting something or burning something.”

The former model is no stranger to having her face promoted across the nation, through decades of exposure on magazine covers and TV.

But it was a different face that stared out after Deborah shared her post-surgery photo on her Instagram two years ago.

“It’s ironic because my face has been my career for decades, yet this would have been different if the cancer was on my shin,” Deborah says.

The real and raw post was difficult for her to upload but she knew her message needed to be heard.

For years, Martina was told not to worry about the ‘scratch’ on her skin. Then came a shock discovery

I have ummed and aahed about posting this,” she captioned the post.

“But after having the stitches out from another major surgery to remove two skin cancers, and being extremely grateful they’ve got it all, I feel it’s only right to remind you to get your SKIN CHECKED!

“Please. Early detection is everything!! Don’t delay. To look at the area around my nose prior to surgery, nothing was visible to the naked eye.

“Only my dermatologist flagged it months earlier. So don’t stuff around with your health.”

Soon after posting the image, Deborah was inundated with messages and support from friends and strangers alike.

The messages haven’t stopped – she continues to receive comments from people thanking her for encouraging them to have their skin checked.

“This is the most meaningful thing I have done with my life.“

And she responds to each one.

“It amazes me the impact it has had on them,” Deborah says.

It’s not just strangers who have confided in her, with Deborah saying fellow media personality Samantha Armytage has also reached out about her brush with skin cancer.

“This is ugly and this is something people should see,” she says of the image.

“I am so thrilled for the momentum.”

With the face, head and neck some of the more susceptible areas for skin cancer, Deborah explains having checks is more important than vanity.

“The fear shouldn’t be the scar that might be left, the fear should be not getting to it (cancer) in time,” she says.

“Your face will heal or you could lose everything – mouth, nose, ear – you need to communicate with.

“I’m lucky to have an incredible surgeon who pieces my face back together.”

With her own skin cancer journey raw and ongoing, Deborah can’t stand the sight of Australians purposely tanning themselves, adding “I wish it were fashionable to be pale”.

Which is one reason why she created a range of UPF50+ hats and her brand Canopy Bay.

“We cannot treat the sun as our mate,” she says.

Her message is clear – find a doctor you trust, have your skin checked regularly and don’t put it off.

“I’ve reached my 60s,” she says, “so I’m in a position where I can try to change people’s perception with their relationship with the sun.”

7NEWS Spotlight: Skin Deep this Sunday 8.45pm after The Voice on Channel 7 and 7plus

Mum whose family has suffered 400 broken bones between them: ‘No point counting’