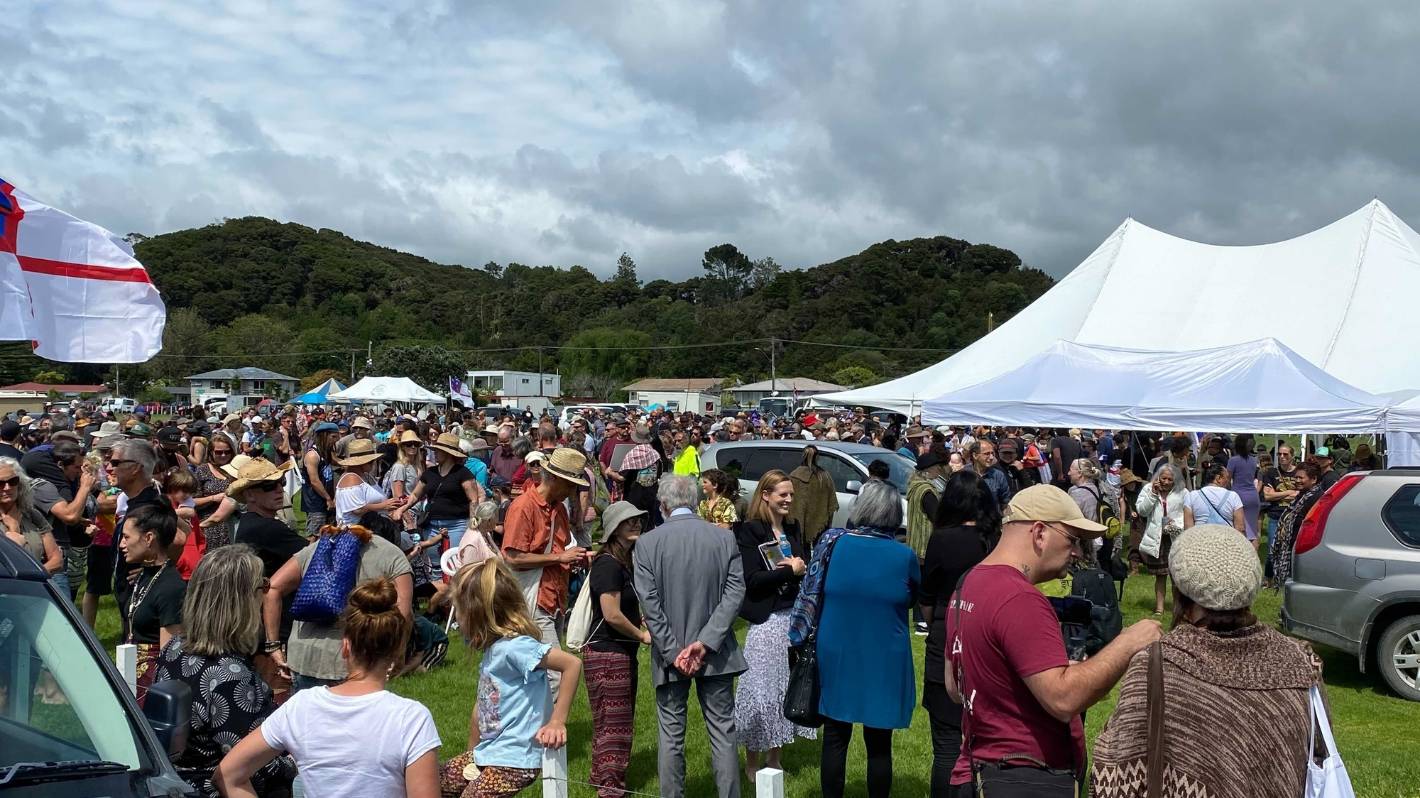 About 2000 people gathered at Waitangi to support an anti-lockdown group’s Northland-bound hīkoi that was blocked by police at Auckland’s southern border.

The march, planned to travel from Rotorua in the Bay of Plenty to Northland, involved those against Covid-19 restrictions and vaccine mandates, but was refused entry to Auckland, prompting marchers to spend Tuesday night camped on the roadside.

Despite police warnings against the hīkoi going ahead, a convoy of about 50 vehicles and about 100 people arrived at Auckland’s southern border checkpoint at Mercer late on Tuesday night, with the intention of heading to Waitangi.

While the group – Sovereign Hīkoi of Truth (SHOT) – remained at a standstill at Mercer, several thousand people and a strong police presence gathered at Waitangi to meet the hīkoi at its planned finishing point.

Families gathered on the grass with picnics, most without masks, before being allowed on to the Te Tii marae.

Tai Tokerau Border Control (TBC) regional co-ordinator Rueben Taipari said the gathering with people unmasked is a very high risk for spreading Covid-19 and said he worried about the risk to elders.

“Any other time of life I would’ve had the most fabulous day seeing everyone together, and the great messages of unity and coming together. But those kaumātua sitting their during the pōwhiri – they’re very important to our culture and Waitangi itself.

“We’ve done so well over the last 20 months to keep our community safe …. Is it really worth putting it all at risk?” he said.

Taipari said the majority of marae leaders did not want the hikoī there, but felt they had to honour their custom to show manaakitanga (hospitality) to manuhiri (visitors).

TBC were invited by marae leaders to help with security as best they could, he said.

Police said while the protest was in breach of 100-person gathering rules under Northland’s alert level 2, their presence was more for general policing.

Police said they deployed additional staff, including iwi liaison officers, to monitor a hīkoi travelling from Whangārei to Waitangi, as well as the gathering at Waitangi.

Mark Nicholls, from Whangārei, said he had never protested anything before but he felt he had to stand up against a “growing wrong”.

Whangārei mother Tania Waitere brought her four children to the event to support freedom of choice.

“My reasoning was to support freedom of choice and for my kids to experience a hīikoi or kaupapa like this – because it’s standing for their future – to have them experience what it’s like to stand as a group and have a voice,” she said.

Earlier at the Mercer checkpoint, police said most protesters complied, however two protest vehicles, including a bus, were parked in the northern lanes of State Highway 1 with their drivers refusing to move them.

Police said the occupants of the bus did not have travel permit and agreed to move the bus off the highway after a lengthy engagement. Police said it is considering possible enforcement in relation to this.

Traffic had to be diverted overnight as a result and police were still trying to get the vehicles off the road, causing delays for vehicles travelling through the checkpoints.

“Police are incredibly disappointed that this group of protesters have chosen to take this action.”

By late Wednesday morning, about 30 protest vehicles had been shifted into a makeshift car park on the side of the road by railway tracks, with a line of police officers blocking them in.

As of about 10pm on Wednesday, 40-50 protestors’ vehicles remained at the Mercer checkpoint and appeared to be staying for another night, according to a police spokeswoman

A spokesman from KiwiRail said it was closely monitoring the situation at Mercer and trains were travelling through the area at a reduced speed as a safety precaution.

About 50 protesters also turned up at Auckland’s northern checkpoints at Te Hana on Wednesday morning, but left without issue, police said.

Police said after midday, a vehicle at Te Hana blocked SH1 northbound and a woman was arrested and warned for obstruction.

A police update at 7.26pm said there are no protestors at the Te Hana checkpoint.

TBC’s Rueben Taipari said they were planning to travel to Te Hana on Wednesday night to encourage those still trying to cross the border to go home.

“We’re trying to persuade our whānau to make the right choice,” he said.

The boundaries in place around Auckland are designed to stop the spread of Covid-19 as the city sits in the centre of the current Delta variant outbreak.

Auckland is in the new-phase alert level 3, which will remain in place until all three of the region’s district health boards reach a 90 per cent vaccination rate, at which point the Government’s new traffic light system can begin.

In a statement on Tuesday, police warned they would have an increased presence at the Auckland boundary and said those deliberately breaching alert level restrictions could expect enforcement action.