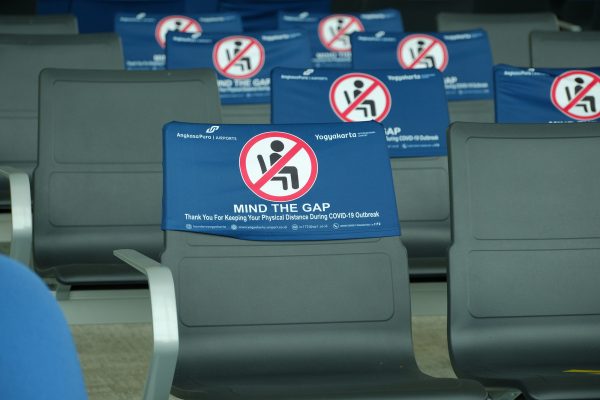 Propelled by the Omicron variant, the country’s daily caseload has increased more than 30-fold in just under a month.

Seats in the waiting room of the international airport in Yogyakarta, Indonesia, on December 19, 2021.

The fast-moving Omicron variant of COVID-19 continues to spread in Indonesia, with daily caseloads reaching six month highs over the weekend, prompting the government to reassess its current levels of public restrictions. On February 4, Indonesia recorded 32,211 COVID-19 cases, the highest in nearly six months, which was followed by 33,729 infections on Saturday and 36,057 yesterday.

This string of alarming caseloads, which brings the country’s total number of confirmed infections to more than 4.5 million, the highest in Southeast Asia, is edging toward the numbers that marked the height of last year’s devastating Delta outbreak. While there are suggestions that the Omicron variant is somewhat milder, and produces a lower hospitalization rate, epidemiologists have warned that the government must tighten restrictions in order to prevent the nation’s hospitals from being overwhelmed, warning that caseloads could increase tenfold by April.

On Thursday, President Joko “Jokowi” Widodo said that the government would immediately “evaluate” the country’s current public mobility restrictions. “I am calling on governors, regents and regional administrations, with assistance from the Indonesian Military and the National Police, to ensure that the health protocols are followed by the people, and to continue to speed up vaccinations,” Jokowi said in Medan on the island of Sumatra. The Indonesian leader urged the people to get COVID-19 vaccines and to “maintain discipline, follow the health protocols, and reduce unnecessary activities.”

While the government claims that it anticipated the spike once the Omicron variant was identified in late November, it would have to be concerned about the ease with which the Omicron variant has spread since the beginning of the year. Indonesia recorded just 1,054 cases on January 15, which spiked up to 10,185 cases on January 31 and then to more than 32,000 cases on February 4, the day that the country opened the island of Bali to all foreign travelers after nearly two years of restricted entry.

This sudden increase prompted Indonesia’s Food and Drug Monitoring Agency last month to announce that it had approved five COVID-19 vaccines – Sinovac, Pfizer, AstraZeneca, Moderna, and Zifivax – as booster shots for those who had already received two doses.

While this was an important step in preventing additional outbreaks in Java and Bali, the epicenters of last year’s COVID-19 surge, a significant portion of the country remains unvaccinated. Indonesian authorities have administered vaccines to more than 186 million people, no minor feat given the logistical challenges posed by the country’s outstretched maritime geography, but this represents only 67 percent of Indonesians. Meanwhile, just 47 percent of the population is fully vaccinated.

While rates in Indonesia’s large urban centers, including the capital Jakarta, are higher than the national average, the opposite is true in outlying regions, where the health system is also less well equipped for a sudden surge. While the Omicron variant is markedly less virulent than Delta, it is far from harmless, and if Indonesia’s current outbreak runs out of control, especially in those regions least well equipped to handle it, it could still exact a serious human toll.