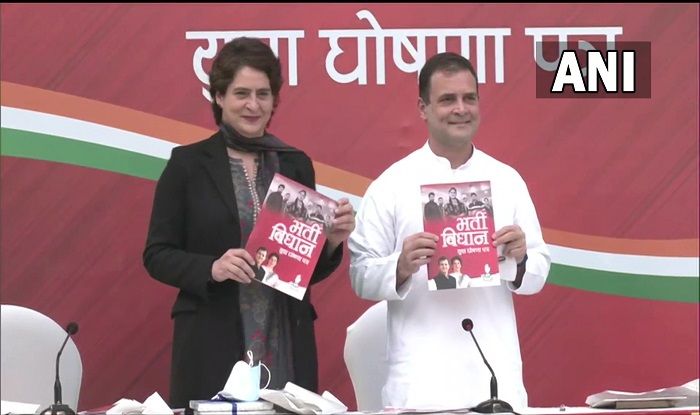 New Delhi: Weeks ahead of Uttar Pradesh Assembly Election 2022, Congress leader Rahul Gandhi and Priyanka Gandhi Vadra on Friday released Youth Manifesto, at the All India Congress Committee (AICC) HQ here. Promising 20 lakh jobs and filling of 1.5 lakh vacant teacher posts, Rahul Gandhi claimed that 880 youths lose jobs every hour in the state. Priyanka, on the other hand, assured that 1.5 lakh teachers will be employed in primary schools if the grand old party is voted to power in UP. Furthermore, she asserted that the education budget will be increased in Congress rule and there will be severe punishments for paper leaks.Also Read – ‘Aapko Koi Aur Chehra Dikh Raha Hai…’, Priyanka Gandhi on Being Congress’ CM Face in Uttar Pradesh

Congress’ manifesto for youth summed up in 5 points:

Earlier last month, the party had released a manifesto for women and promised that all class 12 pass girls in the state will be given a smartphone while all graduate women will get an electronic scooty if the party comes to power. Also Read – Zee News Opinion Poll For Punjab: Charanjit Singh Channi Emerges As Most Preferred CM Candidate

Assembly elections in Uttar Pradesh will be held in seven phases from Feb 10 to elect 403 members of the Legislative Assembly. The term of the existing assembly elected in 2017 will expire on 14 May 2022.