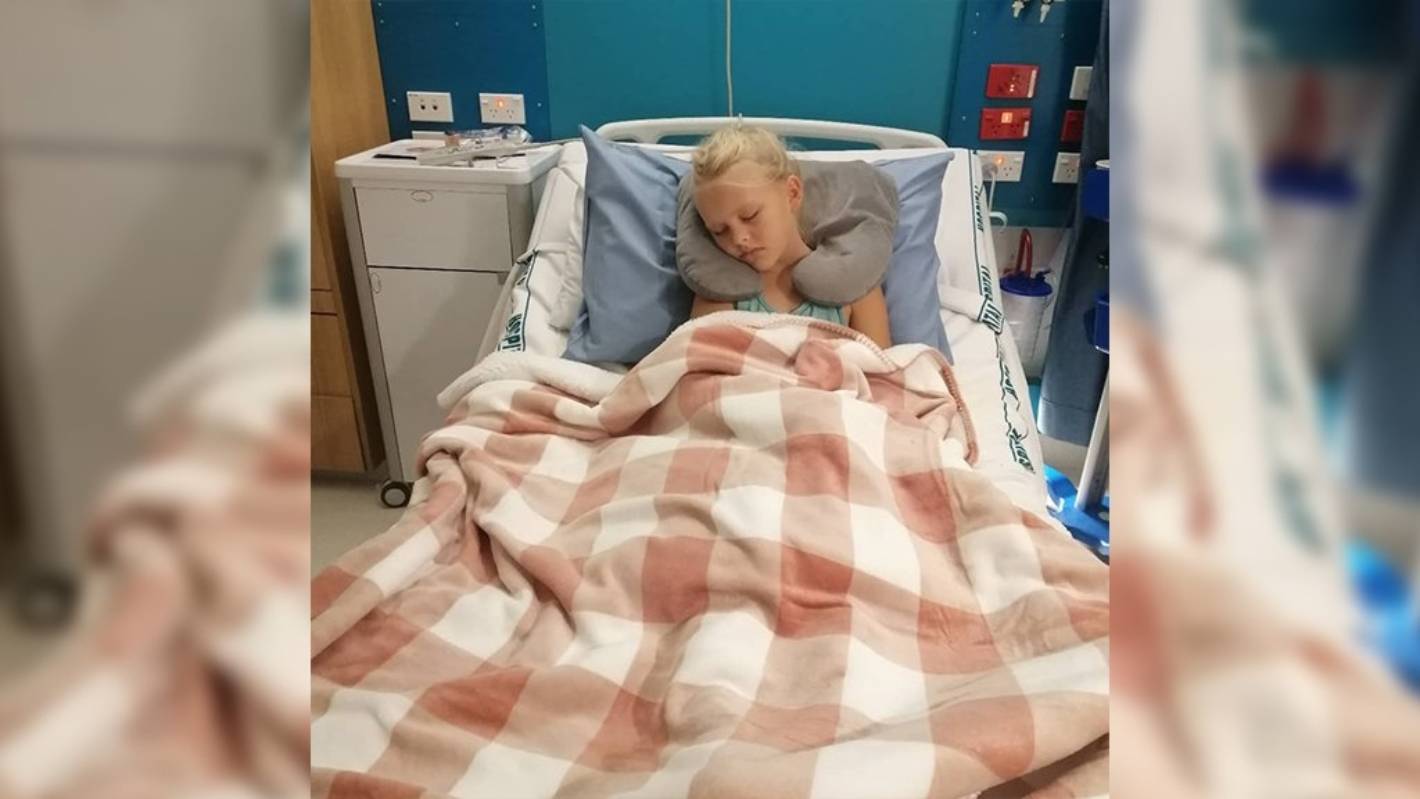 A Kiwi girl stuck in Papua New Guinea with a shattered arm for five days faces more complications after X-rays show some bones have healed incorrectly.

Abigail Peden and her mother Katie arrived at Starship Children’s Hospital on Sunday night after they were granted an emergency exemption, after the 9 year-old suffered serious injuries to her right arm when she fell from a fence on Tuesday.

Transiting through Brisbane, Abigail was expected to land in Auckland at 9.45pm on Sunday night and before being taken to Auckland Starship hospital.

However, Abigail’s mother Katie said in a social media post on Monday morning that they nearly didn’t get onto both flights to get to New Zealand due to a “whole lot of complications”.

“But at the ninth hour we were allowed on both.”

Peden said the drama delayed the flight to Auckland and meant they arrived too late to see the Doctor who had been waiting for them.

After a long night with little sleep and “lots of pain” where Abigail had to be woken regularly for testing, observations and X-rays, Peden said her daughter hadn’t been coping well.

“Please pray for her ability to see though the pain and co-operate with what needs to be done.”

X-rays have confirmed father Dan Peden’s fears that the delay in surgery could cause complications, with the news some bones had already healed incorrectly.

Abigail will now undergo a CT scan on Monday to give the surgeon an accurate picture of what needs to be done before surgery takes place on Tuesday, a week after the injury occurred.

The journey to get Abigail to New Zealand has been a long and difficult one for the missionary family, and left her family fearing the loose bone fragments in her arm might cause irreparable damage.

Their predicament was exacerbated because they had not yet been vaccinated for Covid-19 after Peden, his wife Katie, and their four children, including Abigail, caught the virus last year.

Peden said they had intended to get the vaccination before they returned to New Zealand, but it had not been a priority until now.

Peden and Abigail’s three siblings were not granted an exemption to travel, but there was still some hope that decision may be reversed.

“If us coming over hindered others coming in, I understand, but if we can isolate in one MIQ room it wouldn’t take up more space.”

The saga started when Abigail fell after climbing a fence on Tuesday and was in immediate pain. When Peden inspected her right arm he saw bumps over her elbow, and it looked grossly deformed.

After ringing a doctor at the New Tribes Mission Medical Centre, Peden splinted Abigail’s arm and tried to keep her comfortable overnight until the pair could take the 75-minute flight from Wewak to the centre’s base in Goroka.

However, overnight it became clear that Abigail’s condition was serious, as her arm swelled dramatically.

Originally from Rotorua, the Peden family were in Papua New Guinea as missionaries. Unable to get the surgery Abigail required in the lesser developed Pacific nation, they desperately applied for an emergency managed isolation and quarantine (MIQ) exemption to fly her home to New Zealand.

Waiting for a decision while Abigail has been uncomfortable and in a lot of pain has proved traumatic for her parents.

A doctor’s report seen by Stuff stated Abigail’s young age means her condition was urgent, and she would need a paediatric orthopaedic surgeon in New Zealand to operate.

X-rays confirmed she needed surgery in New Zealand as soon as possible to ensure she retained full function of her arm.

Katie Peden and their other children then flew to Goroka before the entire family took the 90-minute flight to Port Moresby.

They had hoped to get Abigail on the only flight that could get them to New Zealand on Wednesday, but quickly realised the MIQ system did not work that fast.

Every hour became a lifetime.

“If I start talking about it, I’ll probably cry,” Dan Peden told Stuff on Friday.

Head of MIQ operations Commodore Melissa Ross said Abigail and her mother had applied for a medical exemption about 11.50am on Thursday and the rest of the family had applied for an emergency allocation at the same time.

She extended her sympathies and said she understood how important this was for Abigail and her family.

National Covid-19 response spokesperson Chris Bishop called the MIQ wait heartbreaking and said granting the family an emergency exemption should be “a no brainer”.

“If this isn’t an emergency then what is?”

Ross said late last week that many people were in difficult situations as a result of a global pandemic.

“MIQ has an emergency allocation process which exists for limited situations which require urgent travel to New Zealand within the next 14 days. This is a last resort option with a very high threshold.”

Ross said there was also an exemption process for MIQ including a medical exemption that allowed people to isolate in a place other than a facility.